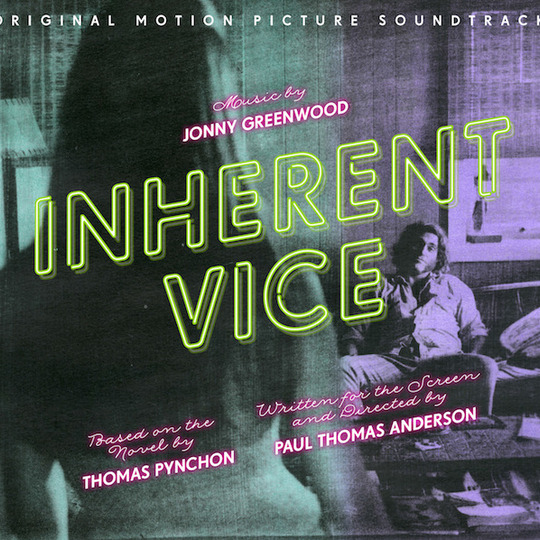 Some elucidation of quite what this release is seems a sensible way to begin this review. Inherent Vice is the latest film from Paul Thomas Anderson, based on Thomas Pynchon’s novel of the same name. It’s a darkly comic crime caper, riddled with the eccentricities of both director and author, and therefore provides quite the platform for Jonny Greenwood - no stranger to film scoring, of course - to weave his usual magic, whipping up the kind of stormy guitar work and brooding strings that has generally become his on-screen calling card through work on the likes of There Will Be Blood and The Master.

Except that Greenwood, for once, doesn’t do that. His work on this soundtrack sees him suddenly take something like a lurch towards convention; who knew that all this time, there’s been an old-school Hollywood romantic hiding inside of the Radiohead man? This time the strings are warm, inviting, and the orchestration consistently feels like a kind of warped throwback to the golden age of the movies. Probably the biggest draw on paper here, for the Radiohead die-hard at least, is the inclusion of ‘Spooks’, which since 2006 has been part of the massed ranks of songs that the Oxford band premiered live, but never seemed to get around to recording. Here, though, it’s been structurally reworked and recorded by Supergrass and - as Greenwood himself has admitted on Twitter - bears little resemblance to the 'half-idea' that Thom Yorke and co joined him on nearly a decade ago.

Instead, it’s Greenwood’s own work that’s most compelling. The album runs in a different order to the film itself, although, perhaps incongruously, still includes snippets of Joanna Newsom’s narration; there’s not a great deal of coherent relation to the picture’s narrative, then, and anybody who saw Newsom’s name attached to the project and hoped it might have finally heralded some post-Have One on Me material will be disappointed. Greenwood runs the stylistic gamut, though; ‘Meeting Crocker Fenway’ feels huge, sweeping, whilst ‘The Golden Fang’ juxtaposes an aggressive beat with staccato guitar arpeggios. Also, included, though are the non-Greenwood songs that also make it to the movie, and whilst that’s all well and good in principle - there’s certainly nothing wrong with the classic Can jam ‘Vitamin C’, or Neil Young’s ‘Journey Through the Past’ - they feel jarring set directly against the score, and only further the sense of confusion in a manner that doesn't feel intentional.

Greenwood has typically spent his time off from that band he’s in turning out intelligent, nuanced work that has gone, at least by way of comparison to Tomorrow’s Modern Boxes, relatively unnoticed. His intelligent forays into orchestral territory have paid dividends both on record and stage - as anybody who bore witness to his stunning show at Manchester’s Albert Hall last year can attest - but this fairly successful deviation from his usual approach to scoring suggests that the brightest potential future for his solo work may lie in this area, with his reputation in this particular realm now burgeoning. His non-Radiohead output has always been interesting and has often been compelling - perhaps if he releases whatever’s next on BitTorrent, it’ll meet with the audience it deserves.