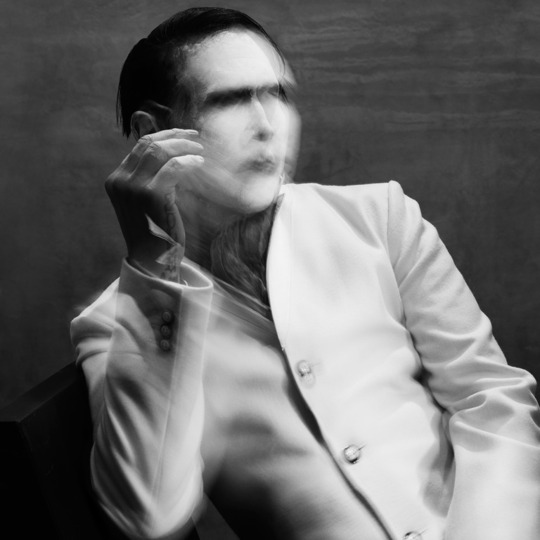 The argument, most recently put forward by a friend of mine in a beer garden where just a mention of the subject of conversation provoked eye-rolling from nearby eavesdroppers, is that Marilyn Manson, for all his fire and dark bravado, never quite made it all hang together on one coherent effort.

Let's give them the benefit of the doubt. Antichrist Superstar, Mechanical Animals and Holy Wood all contain killer hits and moments of genius but as narratives they're disjointed, meandering and bloated, respectively. Manson has a penchant for clinging on that little bit too long and hammering his points into submission, exhaustive becoming exhausting. Though he would relax a little on 2007's Eat Me, Drink Me, that record was so drab and formless that any attempt at brevity couldn't save it. The works that landed on either side saw vices previously painted in garish colours embraced un-ironically, the ground wearing thin. With 2012's Born Villain, flames would flicker but indulgence ultimately trumped insight.

Fresh from dealing death on ultra-grim soap opera Sons of Anarchy, Manson comes out swinging on The Pale Emperor in much the same manner as its predecessor, opting for a languid opening strike and a full-pelt follow-up. These punches are harder. 'Killing Strangers' is an absolute blast, a ten-feet-tall Ric Flair strut of a song that heavily invests in licks and groove. It's a march, cocky and cocksure, and for all the talk of guns… well, it feels bulletproof. By the time Manson literally snarls at the climax, you realise that he hasn't sounded this alive in a very long time. 'Deep Six' sees him gleefully sink his teeth into classic rock, the delivery so giddy you allow familiar lyrics some leeway.

'Third Day of a Seven Day Binge', meanwhile, slinks back into the smart mix of rhythm and blues that permeates the whole record. These are patient, introspective numbers yet almost all have an immediate impact. The hooks are sharp and plentiful, while rich flourishes lie in wait as each new dark corner is uncovered. Plainly, Manson hasn't cared this much since the turn of the century. Sure, he's still preoccupied with the lurid and the ludicrous, the hate and the hypocrites, but he sells every line and makes fairly rote musings like "It's better to be blamed for robbing Peter than guilty for paying Paul" sing on 'The Devil Beneath My Feet', a glam stomp that rises above a basic structure. Credit to former Dillinger Escape Plan and Stolen Babies drummer Gil Sharone who brings more of his latter leanings to the throne here, favouring a direct, nod-along pulse.

There's a similar glittery charm to 'The Mephistopheles of Los Angeles', 'Slave Only Dreams to be King' and 'Cupid Carries a Gun' that keeps The Pale Emperor moving, focused and, well, fun. This is a Marilyn Manson record so it's not exactly sweetness and light - 'Warship My Wreck' makes for a weighty midpoint but is no less compelling - but damned if the devil didn't bring his best tunes to this dance. 'Birds Of Hell Awaiting' is the only real stumble, simply because it tries to be too many things at once. There's a fun Rocky Horror theatrical flamboyance at play but it never quite stitches into a realised piece. It is the sole anomaly on a record that flows and holds together like none of the others. The production, in tandem with Tyler Bates, is a cut above; each new guitar shriek or kiss of the hi-hats boasting as much power as the vocals.

'I'm chaos, I've always been chaos, my point on Earth is chaos,' crowed Manson in a recent, typically posturing Rolling Stone interview. 'I'm the third act of every movie you've ever seen. I'm the part where it rains and the part where the person you don't want to die dies. I'm here just to fuck shit up.' That's the character, the gimmick, the myth. The reality is that despite the zeal for playing boogeyman to the gallery, Marilyn Manson has always possessed the ability to write and produce music that can speak at its own compelling length and pitch. Here he unleashes that side of his frayed character for the first time in about 14 years. All hail.