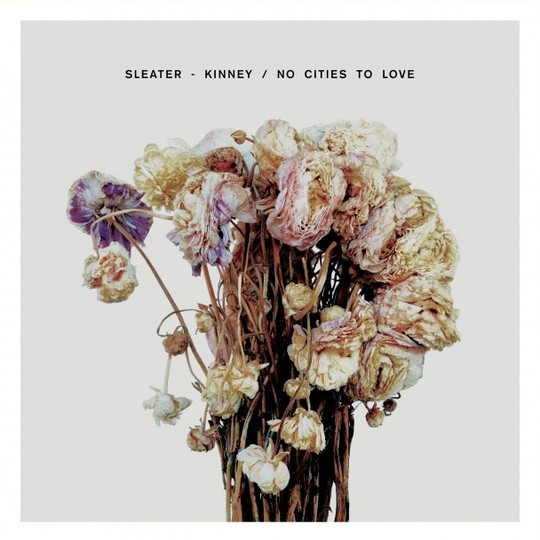 On their last album, 2005's The Woods, Sleater-Kinney took a perceptible step into the heavier side, taking inspiration from Hendrix and Deep Purple for extended thrashes of classic rock that took them thrillingly far from their punk rock roots. Arguably the trio's best album, it douses its listener with ferocious declarations and an indulgent 11-minute song that compares love to a boxing match. It was also their first record to be put out via Sub Pop, with the trio swapping long-term producer John Goodmanson for Mercury Rev and The Flaming Lips man Dave Fridmann. And, of course, it was their final album for ten years.

One indefinite hiatus later, the reunited Corin Tucker, Carrie Brownstein and Janet Weiss have got Goodmanson back on board for No Cities To Love, a comeback album that takes a pointed step out of The Woods. Instead it marks a return to the triumphant sound of Dig Me Out et al, edging the trio into territory familiar yet ever-present and forward-thinking. Recording in studios spanning San Francisco, Portland and Seattle, the band evoke inner-city angst, combining it with a profound confidence that doesn't shrink from telling you how it really is.

Led by two singers who know exactly how to work with each other’s vocal strengths, the texture of Tucker’s vigorous bellows interweaving with Brownstein’s ever-fervent performance makes for a collision of potency and beauty. This is particularly arresting on ‘Fangless,’ commanding “You were born in a shout, but you will die in a silent skull” to a man once considered “a saviour, a mountain”. Kicking off with Weiss’ illustrious fills, crisp and determined as ever, Sleater-Kinney are able to tease their listener with dips into angelic backing harmonies, solo verses and an almost placid breakdown before erupting into a crescendo-fuelled mirage of simultaneous, layered vocals and arresting instrumental forces.

The subject matter throughout the record flitters between death, self-respect, longing and love. ‘Price Tag’ absorbs a denunciation of consumerism, opening the album with lethal urgency, lamenting the enforcement of 9-5 and the robotic mentality of society. Harking back to Sleater-Kinney’s punk beginnings, they’re as current as they are contagious, producing a sing-a-long stature with razor-sharp precision and killer hooks. ‘Surface Envy’ continues the industrious aesthetics, with cascading guitar solos and a pounding core that makes its message “We win, we lose, only together do we break the rules” all the more encompassing; this particular chant is so damn fist-in-the-air catchy, the abrupt finish will cause some serious disappointment.

Whilst the band themselves are unsure as to whether this is a permanent return, they've made their reformed intentions clear – No Cities To Love was created out of a sheer need, a hungry desire to make music with each other again. This craving is apparent on every song; the almost possessed yet stripped-back verses of ‘A New Wave,’ accompanied by distorted intermissions before fading out in a jam-like fashion; the demands of ‘Gimme Love’ that pushes Tucker to superb extremity, combining rapid chords, tenacious solos and blunt rhythms and of course, lead single ‘Bury Our Friends’ that arrives with an assertive pulse that never wavers and produces one of the most captivating choruses on the record.

“If we are truly dancing our swansong, darling, shake it like never before” they sing on the proggy final track ‘Fade,’ reminding us to cherish every Sleater-Kinney record as if it were their last. Woozy and bringing back The Woods' classic rock undertones, the juxtaposition of high-pitched vocals against a backdrop of distorted fervour is a flourishing finish to an album that puts memorable choruses, relentless honesty and unwavering energy at its core. Sleater-Kinney are one of the great rock bands and No Cities To Love is the perfect comeback: a treat for die-hard fans as well, a perfect introduction for newcomers ­– and what a journey that’ll be.