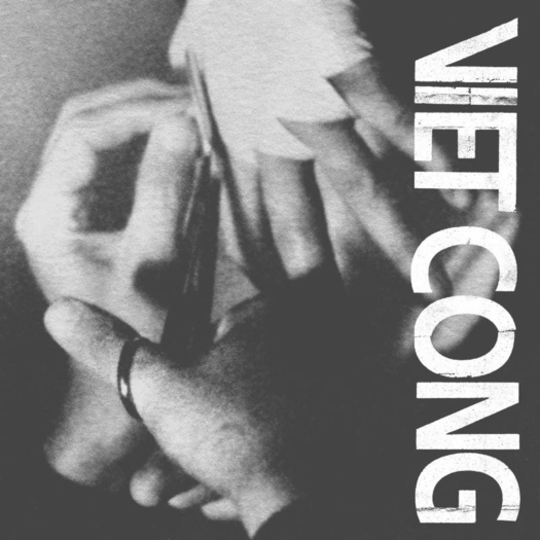 If the first New Order record had ended with a cacophonous 11-minute track called ‘Death’, you have to imagine people would have read something into it. So while at no point does the self-titled debut from Canada’s Viet Cong make any direct allusion to the passing of Christopher Reimer – late guitarist from Women – it’s hard not imagine the band formed by Women's Matt Fiegel and Mike Wallace's as haunted by their erstwhile bandmate on some level.

In large part that's because Viet Cong is a stupendously heavy album, not so much because it’s loud – though it is really loud – as dazingly visceral. Though Women had effectively split up two years before Reimer’s death in 2012, in the absence of clear meaning in Viet Cong's processed maelstrom, the knowledge that a death was its catalyst can’t help but inform the harsh, dark music. And Fiegel's lyrics – cryptic though they are – don't exactly shake the impression: “If we’re lucky we’ll get old and die” ('Pointless Experience'); "when all is said and done , you'll be around until you're gone" ('Continental Shelf'); "you went too far the other way; you'll never get old" ('Death).

Still, there is no question that this is a new band: Viet Cong does not sound like a third Women album; it scarcely even bears any resemblance to 2013 Viet Cong demos collection Cassette. Their aesthetic, I suppose, is extremely loud and incredibly close, gargantuan drums that sound like live recordings from a war married to screeching noise and woozy bass and electronics. There is a painful enormity to the music, which is mixed with a rawness and volume that often makes it come across like an approximate recording of something too huge to contain on tape. ‘Death’, with its supple beginnings, terrifyingly loud instrumental midsection, and howled final phase, is a strangely difficult song to actually remember except in snapshots, something to be lived through rather than hummed along with.

That said, Viet Cong's volatile brew often coalesces into something disarmingly catchy: ‘Pointless Experience’ is staggering, frantically phasing electronics dancing ballistically round an implacable battering ram of a vocal mantra from Fiegel; the verse of ‘Continental Shelf’ - basically just very loud feedback and a single drug hit extremely hard – gives way to a wry, clubby chorus; ‘Silhouettes’ flings some icy, detached keys in and manages to echo something of Pornography-era Cure (one suspects the band rather enjoy their goth music – Cassette included a Bauhaus cover).

What it really shares with Women is a sense of obscurity: Women’s music seemed concerned with erasure through distance; Viet Cong do it by bringing it up too close to take in. Viet Cong are dark, and loud, and somewhat musically progressive, but beyond that it’s hard to really pin them down other than a guess that Christopher Reimer's death somehow figures. And it's that inability to really get their measure, to really understand what they’re trying to say –even when Fiegal is screaming, which he does frequently – that makes their multihued onslaught so alluring.

If the album has a weakness, it’s a slightly soft centre: the mercurial ‘March of Progress’ and ‘Bunker Buster’ have moments of psyche-rocky conventionality that leaven Viet Cong's intensity in a way that’s not really necessary for a record so brief (seven songs in 35 minutes, with ‘Death’ almost a third of it). But it’s all to the good, really: Viet Cong have a brilliance so unstable, even they can’t quite control it.