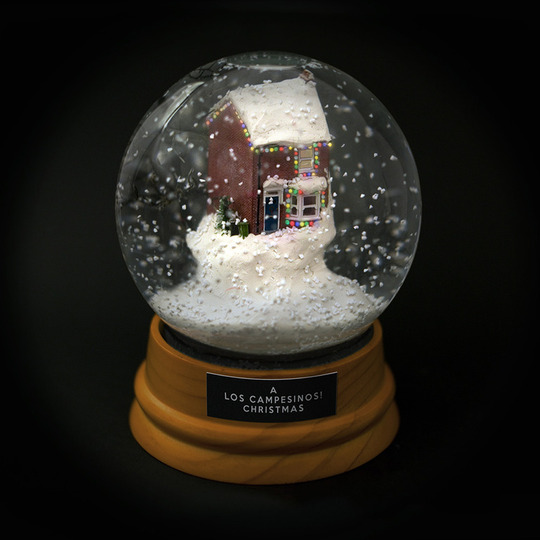 There should be a rule that all indie bands must do a Christmas record eventually. As a creative exercise it really sorts the wheat from chaff, and it’s more difficult than you’d think– try too hard and you’ll end up over-egging the nog (and yes, I'm unnecessarily proud of that phrase). The Manics made a right pig's of ear of it a few years ago by trying to be Wizzard; but on the other hand if you don’t make with the Christmas sparkle it becomes a bit pointless (exhibit B: Glasvegas’ miserable A Snowflake Fell And It Felt Like A Kiss.) But get it right? Get it right and you have a perennial that your fanbase will be putting on their ‘A Very Indie Christmas’ compilations for years, and let’s face it – Los Campesinos! fans bloody love making a compilation.

With A Los Campesinos! Christmas the Cardiff(ish) six(ish) piece have nailed the indie Xmas EP, putting them in a rare and select club alongside Low, Slow Club and Sufjan 'I have released literally a hundred Christmas songs' Stevens. Here Gareth Campesinos!’ mob have done everything right by understanding exactly what festive releases should be about: they need to be Christmassy, certainly, whether that’s happy or sad, but they also need to say something about the band. They should be a unique take, and that’s exactly what LC! have pulled off.

Mark my words, this is a very Los Campesinos! take on the season: bitter-sweet, tuneful, tough and a little bit silly. Opener ‘When Christmas Comes’ is an almost tangible snow-blanket of strings, keys, guitars, and big splashy noises. It’s everything that’s great about the band they’ve become, a tougher, leaner noisepop beast than their tweecore beginnings. ”Christmas Eve, torrential rain/ A single snowflake on this plain/ I held you in gloved hands and I’m not letting go” goes the chorus: a bit of misery, a spark of love; that’s Los Campesinos! all over. The band twist the conventions of the season to meet their own gleaming-sixpence-amid-the-muck worldview. Witness the opening seconds of ‘Kindle A Fire In Your Heart’, where the timeless and completely familiar melody of ‘Silent Night’ descends in the wrong place, misses its step and morphs into a riff that couldn’t be more Los Campesinos! if it tried. Proceedings are capped off nicely with Mud’s ‘Lonely This Christmas,’ and if you were going to pick a Christmas number one for this band to cover (Gareth must be seething that ‘Caravan of Love’ missed out by one week in 1986) it’s not a bad shout – there’s a seed of utter misery at its core, and Los Campesinos! run with it. If anything their version is even more preposterously melancholic, straight-facing a spoken word section which concludes with ”merry Christmas darling, wherever you are." The refrain of ”it’ll be cold, soooooo co-oo-old/without you to hold/ this Christmas could have come straight from the band's lyric book at any stage in their career.

But more than a good Christmas EP, this is a good Los Campesinos! record. It illustrates how far they’ve come – the older ‘Kindle A Flame...’ feels like a remnant from a past regeneration next to the sparser, more robust ‘The Trains Don't Run (It's Christmas Day).’ There’s clear signs of how many directions they could still go as well – the centrepiece of the EP is a Rob Campesinos!-led trad-folk reworking of ‘The Holly & The Ivy’ that is so beautiful as to be almost unseemly. When it breaks down to an exquisitely put-together choral section it feels like the band are soundtracking a Tim Burton film, they manage to out-Sufjan Sufjan Stevens on a Christmas record… no mean feat. The admission price is worth paying for this alone.