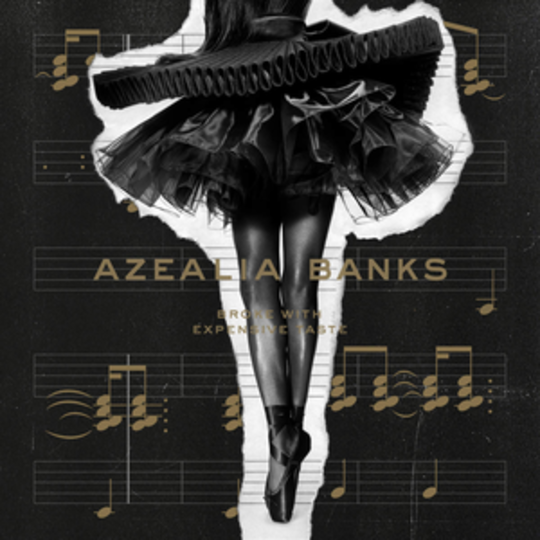 There's that music hack's proverb about how a band or artist's second record is always more difficult to write than the first... because with the first one, y'see, they had their whole lives to write it, yeah? I wanna sentence myself to an eternity in the Eighth Circle of hell for deploying such a tiresome rouse now... but it really does feel like Azealia Banks has been writing her debut record half her life. Yet I'm pretty sure she'll have little trouble topping her inaugural long-player.

It was in 2008, when George Dubya was still in the White House, that Banks dropped her first efforts online, one of which was 'Gimme a Chance' – the second song off Broke with Expensive Taste. After that she released a couple of mixtapes, as well as an EP, while winning awards and topping NME's Cool List before she'd put out an album. Disputes arose with Perez Hilton, Interscope, and artists she'd sampled, while releases were inexplicably pulled at the last minute. Now, after six years, we have an album. Has all the inchoate hype and controversy been worth it?

Broke with Expensive Taste is less than the master statement some have no doubt been waiting for. But I'm pretty sure that's not what Banks was going for here anyway. More or less self-released with no prior announcement, and after months of delays, it's an hour-long document of her best bits to date and various stylistic stabs. There are common threads such as her enjoyable predilection for (or 'reclamation' of) the word 'cunt', as well as the mazey programmed percussion, dubby vocal interludes and bouts of light-speed rapping. But the last thing you'd call Broke is cohesive.

Take the album's version of 'Gimme a Chance': it has a kids-TV-show-style chorus, effortlessly rapped verses, scratching, and a dash of histrionic brass takes poll position about halfway through – when it transforms into a Latin hip-hop song, complete with Azealia riffing in Spanish. It shouldn't work, but does. Then there's the name-making '212', first released back in 2011 and just as thrilling as ever: minimalist drums give way to clubby electronica, followed by laid-back rhyming, then a breakdown bassy vocal before the dancefloor fills again.

Across a whole album, this eclecticism can be a bit disorientating. (Okay, it's a fucking trial at times.) Just how has one woman dabbled in so many different genres? Born in 1991, she has experimented far more than most of her peers ever will, and more than most artists with careers two or three times longer than hers. It's fitting, then, that her debut should partly a round-up of her career to-date.

Across Broke there are multiple Azealias to contend with, each one's vocal styling as peculiarly agile as the last. But its not just her voice that keeps changing. There's the doom-hop of eerie and exhilarating 'Ice Princess', which morphs into near-incongruous synth-pop for the chorus. There's the distorted yelling in 'Young Rapunxel' that brings to mind the screeching of Alice Glass. The piano-and-sax opening of 'Desperado'. The Middle-Eastern-sounding flute that shows up on 'Wallace', which is otherwise punctuated by trash-can percussion.

From the Nineties-grooving 'Soda', the last third of the record shifts gears from the sometimes sparsely backed rap that dominates Broke's centre, 'Soda' is topped by a catchy vocal line that pleases in part for its less-than-typical hint of vulnerability, pivoting around the line: “I used to be your girl”. 'Chasing Time' also conjures Nineties dancefloors but with an oh-so-contemporary clubtastic pre-chorus that never quite gives way to an actual chorus. 'Luxury' has some deliciously weird singing astride twinkling space-synths and a squelching bassline.

And then there's 'Nude Beach A-Go-Go', a surf-rocking Sixties throwback that was written with Ariel Pink – and appears in lo-fi form and sung by Ariel on his just-released new album, Pom Pom – and sticks out like a sore thumb (the Pom Poom version is staggeringly superior). The closing tracks 'Miss Amor' and 'Miss Camaraderie' return to Nineties dance music, but both sound a bit heartless, and neither really goes anywhere.

If my whistlestop tour has left your head spinning, try actually listening to the thing. Broke has instances of stunningly original songwriting and there's rarely a dull moment, but it's more a kaleidoscopic 'story so far' than a complete manifesto. And Banks pulls in so many different directions that there's simply no telling which way she will go after this. I, for one, am looking forward to finding out.