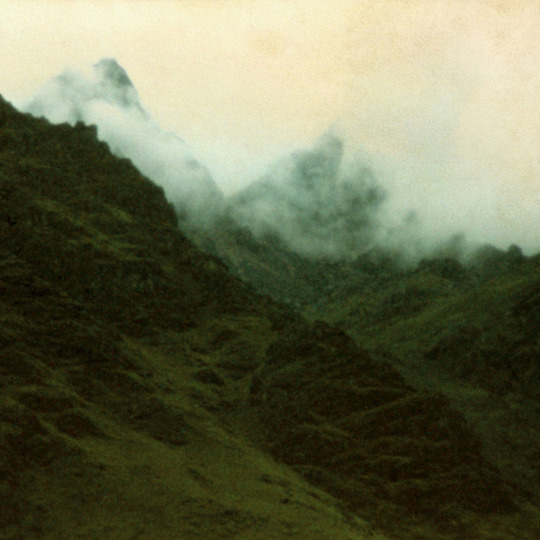 ‘Nü-Balearica’, ‘Motorik-Worldbeat’,‘Neo-Detroitist-Funk’ : not terms formed by jumbling up the magnetic letters on a fridge door, but the increasingly imaginative adjectives that have been used to describe Gala Drop’s sound. And while the accuracy of these terms is up for some debate, they serve to illustrate how tough it’s been to pigeonhole the group due to their broad range of influences. Indeed, their self-titled 2009 debut saw the Lisbon based quartet - unfettered by geographical specifics - cherry-picking elements of their favourite music from around the world and absorbing it into a singularly idiosyncratic sound; incorporating aspects of dub, Afrobeat, prog, psychedelia, house, funk and the bounce of their native Portuguese rhythms.

ii follows a similar path. ‘You and I’ sets the stage early for many of their recurrent sonic motifs; opening to the shimmer of glitchy house-infused electro and serpentine melodies that slowly draw you deep into a darkened dub flecked echo chamber. Elsewhere, ’All Things’ takes the conceit of a slow reggae jam and gradually builds to a rapid-fire crescendo; hyper kinetic percussion breaking over gentle waves of synth. Album highlights ’Sun Gun’ and ‘Let It Go’ mix exotic rhythms and tribal beats into a woozy, poly-rhythmic cocktail, the latter bopping along with hypnotic house sirens and a winding funk bassline, while the former's jittery Roy Ayer’s-esque flavour conjures up images of warm climes and sun-dappled waters.

By rights the results of this intriguing ‘post-world music’ (which is my contribution to the growing list of descriptive terms for their sound) should feel like an godawful mess. But - in no small part to their accomplished musicianship - it manages to hold together with a surprising level of assuredness. Perhaps the biggest reason for cohesion on ii is the newly recruited addition to the group of American ex-pat and veteran of the Detroit music scene Jerry The Cat.

With an impressive CV - he’s worked with everyone from Funkadelic and Parliament to Derrick May and Theo Parrish - his presence seems to bring a renewed sense of purpose to Gala Drop. And it’s one that can be felt across the LP, whether musically, in the trans-Atlantic beats that interlace ‘Samba da Maconha’ or vocally as his soulful baritone brings focus to all but a handful of the tracks. Adding a layer to the groups dynamic that - on tracks like ‘Slow House’ - elevate what might have otherwise felt like an aimless, elongated jam.

But there’s a nagging problem at the core of ii, because while it’s undoubtedly enjoyable it’s rather facile; lacking some of the depth that might have made this Gala Drop’s definitive recording. The group’s eclecticism does them something of a disservice - not through lack of proficiency - but because it fuels a lack of identity. The result is an album that feels less than the sum of its parts, which is a little disappointing, because it shows enormous promise but just falls short of making the kind of statement a six-year-wait implies.