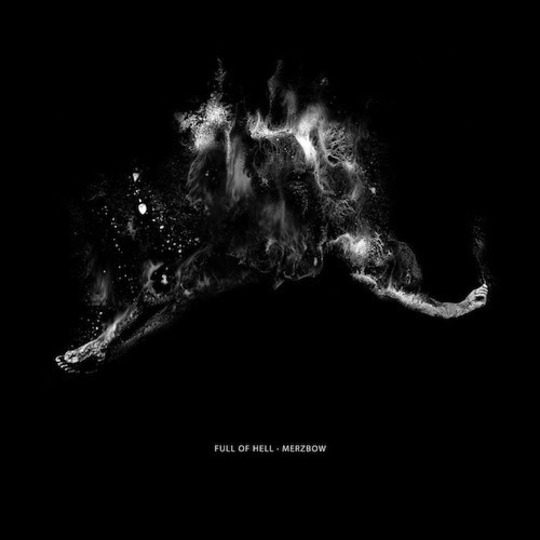 Where to start, eh? The trouble with a lot of extreme music - and let’s be clear here, this is pretty extreme as it goes - is that it can be difficult to say much about. For instance, five of the tracks off Full of Hell & Merzbow run to a minute or less. They’re all extremely heavy, brutal, weird, dissonant grindcore songs. They’re all good grindcore songs, but what can you really say about a song that’s only 33 (‘Mute’) or 44 (‘Humming Miter’) seconds long?

Another reason why extreme music such as this is not all that easy to talk about is that, for some, it’s just going to sound like complete noise and nothing I can say will change that. And that’s completely fine. I understand that. To be honest, even though I get a thrill from listening to stuff that’s transgressive and really pushes at the boundaries of what constitufes music, I do struggle with Masami 'Merzbow' Akita's regular output. Still, the prospect of him collaborating with Full of Hell, a hardcore band that's extremely noisy in a completely different way, holds some fascination and I was curious to see what he could add to some brutal riffs. The answer, sadly, is: not a lot. He seems barely present on the heavy tracks and only on two-and-a-half songs could I definitely point to what I presumed was his involvement.

It’s not just the astoundingly short length that’s the problem here, although that is certainly part of it. Full of Hell & Merzbow will, in total only cost you around 24 minutes of your life. Sure, you may point out that Slayer’s Reign In Blood is only 28 minutes long. But, if nothing else, Reign In Blood is consistent, and it certainly doesn’t fuck around. Over half of the tracks on Full of Hell & Merzbow fly by in a blur of intensity. That’s fine. But at the end of the album you unexpectedly get two tracks of around five minutes each. The first, ‘High Fells’, is built around a surprisingly doomy riff and halfway through descends into even-more-surprising trumpet-led free jazz that I can only assume is the work of Akita. The ending runs with the doom/jazz theme and becomes somewhat reminiscent of Sunn O))), especially ‘Alice’ off Monoliths and Dimensions. That’s no bad thing – it’s the best thing on the album.

Next up is ‘Ludjet Av Gud’, a long, experiment track consisting largely of a pounding, regular drumbeat, muffled screaming and pure noise. It’s very weird and unsettling, and pretty successful too. It’s much more like what I was expecting from the album. The trouble is that it’s followed by the album closer ‘Fawn Heads and Unjoy’, another minute or so of grindcore with some more trumpets thrown in. It seems a really odd, and somewhat pointless, way to end the record, and it shows how strange the pacing is. The only thing similar to ‘Ludjet Av Gud’ is the wonderfully named ‘Raise Thee, Great Wall, Bloody and Terrible’, another track built around pure noise and muffled shouting. The concept works better with ‘Raise Thee...’, because it serves as an interesting break from short, intense, songs. The same trick done right at the end of the album doesn’t really work the same way, especially when it’s followed by a song incredibly similar to at least four others that have come before.

All in all, it’s difficult to recommend Full of Hell & Merzbow with much enthusiasm. It’s so short, and such a mix of styles (all of them pretty intimidating) that I’m not sure it’ll appeal to anyone who isn’t improbably well-versed in the spectrum of extreme music, and even then they may find the album frustratingly inconsistent and lacking in substance. It does have some pretty good stuff on it - ‘Thrum In The Deep’ is essentially a very good death metal song with some additional noise washing over the breakdown - and on repeat listens some satisfying subtleties begin to emerge out of the walls of noise. The tracks where Merzbow appears to have more of an influence are interesting. But you never get a full feel for the collaboration or what the parties can bring to each other and it feels more like a collection of ideas than a fully-formed project. Ultimately, this is a partnership with lots of promise that doesn’t really deliver much.