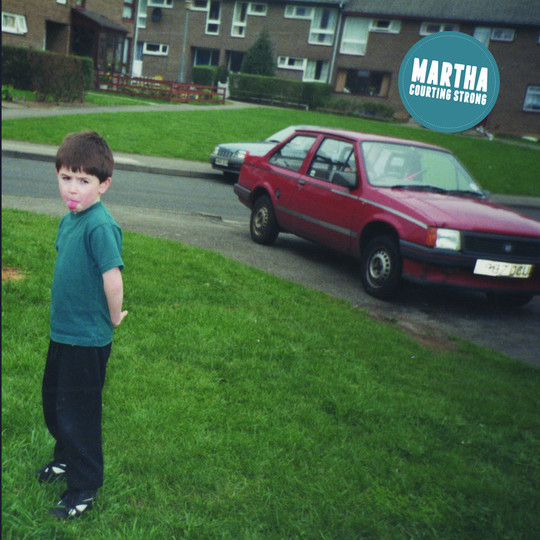 Many would argue that the concept of bands writing songs about growing in the grim old north is a tired one, a path trodden so heavily down the years that there’s precious little of interest left for anyone to write about the subject. Still, once a decade or so, you’ll find a group who can circumvent the cliches and portray the heart and soul of their world so eloquently that it catches the listening public off-guard. In my music-buying lifetime, two big examples in the shape of Pulp and Arctic Monkeys spring to mind. Both bands essentially changed the way a generation of kids saw the world simply by writing clever pop songs which somehow made the city they grew up seem at once the loneliest and most exhilarating place on the planet.

While County Durham’s Martha may not yet had as a momentous an impact on popular culture as the aforementioned two bands, to me their debut album Courting Strong paints just as vivid a picture of growing up in the pit village of Pity Me as their forebears did with reference to Sheffield. Whether they’re singing about love, gender identity and sexuality or kids getting pissed up outside a cathedral, the four-piece gang exhibit a delicious mastery of the art of balance. Their songs are at once clever but not smart-arsed, fun but completely serious, catchy but lusciously enriching.

The most telling illustration of Martha’s canny instincts in getting the tone just right comes in the way they use words throughout Courting Strong. It’s a massive part of the appeal of the album that they seem to choose absolutely the right language to transmit whatever they’re singing about. Like on ‘1997, Passing in the Hallway’ when Naomi Griffin sings "Maureen, school is totally boring, these GCSEs really get to me, I long for your company"’, in the process beautifully depicting the terrible thrill of young love by stripping it down to the most elemental terms.

It’s not certainly not an accident that they’re able to do this, either. In a recent interview they talked about what they were trying to express on penultimate song ‘1967, I Miss You, I’m Lonely’. It’s a hugely important track in the context of the album, which kind of sums up the whole aesthetic of Courting Strong, embarking on a verbose trip around a number of landmarks both geographical and literary before arriving at a chorus which echoes the blunt titular sentiment ‘I Miss You, I’m Lonely’. As Nathan acknowledges, it’s an illustration of the fact you can write a million words to try and express yourself, but the simplest words are usually the most effective.

The band chose to recruit a kindred spirit in Hookworms’ MJ to commit their ideas to tape, and just like his work with Joanna Gruesome, Honeyblood and a number of other great records in recent years, his production captures the character of Martha masterfully. Between band and producer they’ve managed to condense a (young) lifetime of experience into a half hour bundle of explosive punk-pop, and there’s so much exuberance and energy underpinning the emotion and warmth of these recordings that it’s difficult to imagine a situation where anybody might not be affected by them.

In short, then, Martha are one of the most thrilling and likeable bands to emerge from the North East in god knows how many years. I really could spend hours extolling the virtues of this absolute triumph of a record, but perhaps it’s best to follow the good example set by Martha and know when to keep your sentiments simple. Courting Strong is just fantastic.