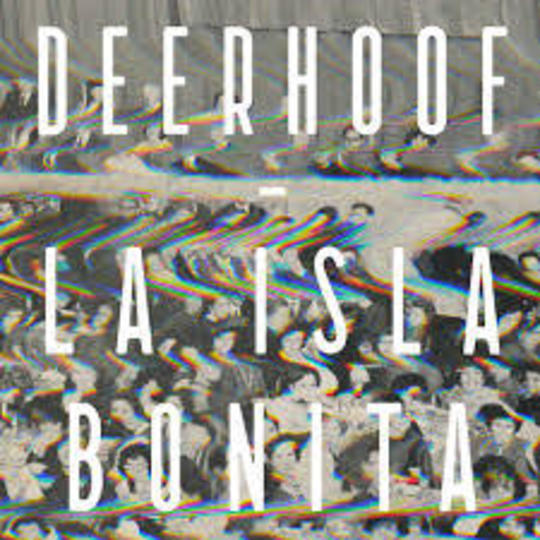 Deerhoof are one of those peculiar bands who have never needed to worry about remaining relevant as they never really were in the first place. With a career spanning 20 years and spawning 12 albums, they’ve continued to make music that’s impervious to outside trends and wholeheartedly committed to pursuing whatever wonderfully fickle creative impulses grip them at that particular time. Deerhoof have always made the kind of albums that only Deerhoof can, and thankfully La Isla Bonita is no different, though a couple of decades in and it’s hardly surprising that they are digging up a certain amount of old ground.

It begins with as fine an example of their trademark skewed, off kilter pop as you’ll find on any of their recent releases. ‘Girls’ has it all: an obtuse and angular opening, guitar scratching away over layered percussion and the simultaneously disconcerting yet enticing groan of Satomi Matsuzaki drawing all Deerhoof-ers into the utopian vision of La Isla Bonita. The track is steadily assembled before your ears with increasingly funked up percussion and intermittent cascades of electric guitar that seem to make more and more sense as the song progresses. It is all things at once – catchy, experimental and entertaining, and it could sit anywhere within their extensive back catalogue. Then comes the unexpected shift in tone. For a band with such an erratic musical identity it’s testament to them as musicians that they can still come up with something as stark as ‘Mirror Monster’. A delicate piece of electronic freak-folk it is understated and, for Deerhoof, surprisingly linear in its composition. Yearning and heartfelt, it’s a standout track.

Such a measured tone is never repeated, though, as the band pour their attentions into capturing the energy and spirit of their live performance. The instrumentation is continually deconstructed and broken down into its constituent parts with a rawness that harks back to their earliest efforts but a self-referential playfulness that comes from so much experience. ‘Tiny Bubbles’ for example is gradually dismantled into its discordant and unrelated parts, played as if by exhausted and labouring musicians only to be sped up and reassembled at will. As a whole it provides a Deerhoof for Dummies tutorial and an insight in to the writing and recording process. It’s fascinating but in truth a little frustrating. Elsewhere ‘Last Fad’ borders on pastiche, like a group of classically-trained sound artists attempting to render in music the throwaway melodic babbling of a hyperactive child. The band has gone back to their roots in a self-referential frame of mind and unfortunately the outcome is mostly unlistenable.

Elsewhere ‘Exit Only’, recorded in one take as a sort of homage to The Ramones, displays a heavier sound that defies the album’s opening and takes things down a more dystopian route. If you listen hard there are some prog influences, as if Embryonic era Flaming Lips, or the more recent Electric Würms project, are encroaching in on Deerhoof’s back to basics basement recordings. ‘Oh Bummer’ is a strong way to bow out too, unhinged and apocalyptic but somehow soothing – a gradual reduction into nothing rather than a cataclysmic end of existence. However, as a final track it isn’t completely fulfilling. In many ways this should be expected after 20 years leaving listeners scratching their heads, but with La Isla Bonita this feels a little different. The album seems to cover all bases, all periods of their career, and as such catches the band at their best and worst. Sonically it’s too concerned with what they’ve produced before and so there isn’t a tangible thread to be pulled from the album as a whole. The record is at its best when kept simplistic and spontaneous, but for much of it you sense they have thought about it a little too much and become a little too self-aware; for a band like Deerhoof that can lead into some pretty iffy territory.