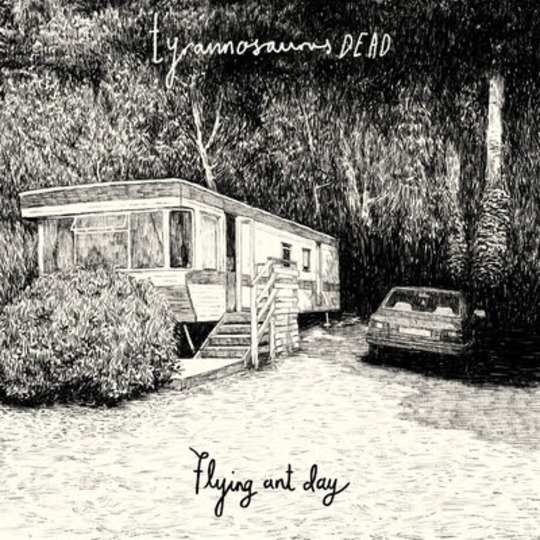 While DIY culture is essentially a product of necessity borne out of a paucity of resources, over the last few decades it has unquestionably developed into a powerful force of its own with a distinct and (mostly) positive identity. While it’s not without its flaws or challenges, nowadays the DIY community broadly stands for inclusiveness, creativity and cooperation, encompassing a slew of tightly knit people doing stuff together purely for the love of it.

The personnel comprising Tyrannosaurus Dead and Odd Box Records have both been hugely active contributors to this scene for a while, the former releasing a string of singles and EPs on various labels in the last few years, the latter having put out 80-odd records by dozens of indie-pop bands since 2009. As such, the continuation of the relationship between band and label which started with the release of the Pure // Apart EP last year seems a perfectly logical platform for the release of the first Tyrannosaurus Dead LP.

The band’s back catalogue has been growing distinctly richer and more extensive since their first uploads to Bandcamp in 2011, but this has also meant they’ve given themselves what footy managers might refer to as a ‘nice problem’. Thus far they’ve been successful in keeping their urgent noise-pop fresh, not resorting to autopilot or the mimicry of their multitudinous forebears at any point. If you’re an observer inclined towards cynicism, though, you might start to wonder whether there’s a point when they may cease to be able to continue fruitfully mining such a narrow seam before it stops being exciting and begins to grow stale.

With such a strong collection of songs behind them, the temptation to slip one or two of these onto the album must have been strong, but having apparently drawn a line under their past with March's Greatest Hits compilation (tongue rammed forcibly into cheek with the title of course), the band have started from scratch with ten new songs. In doing so, they’ve demonstrated with what seems like offhand ease that they’re completely incapable of being anything other than thoroughly vital.

Of the key elements which make Flying Ant Day so good, the most significant is the continuing sharpness of Billy Lowe’s songwriting and delivery. Whether he’s conveying anger, passion, sadness or any other form of angst you might care to think of, his insouciant delivery makes it seem like these words are just coming out of his mouthas he happens to think of them. In reality, though, they’re stuffed with venomous meaning as he rails against small-town dickheads, all the while dreaming of a future away from it all.

His interplay with co-vocalist Eleanor Rudge, always a strength of the band’s previous work, is a particularly spellbinding element here too. Rudge’s voice feels like a natural gravitas-laden underpin to Lowe’s 30 Year Old Teenager, reinforcing his words with a persuasive sobriety, particularly on ‘Post Holiday Dead Song’ and ‘Local Bullies’. The latter is one of the album’s highlights, a confident, stroppy slice of pop devilry which bitterly counsels “our parents can stay the fuck away”.

We’ve already seen with their label hook-ups that Tyrannosaurus Dead are pretty adept in surrounding themselves with the right people. This astuteness extends to producers too, because former Test Icicle Rory Attwell does a first-class job of capturing the energy of the songs. Just like his previous work with the likes of Veronica Falls, Male Bonding and Evans the Death Attwell fades gracefully into the background, almost invisibly guiding the songs to establish their inbuilt weighty intensity without leaving obtrusive fingerprints anywhere.

Flying Ant Day is a complete success, both in the context of a debut album and also as a blueprint of the craft of noise-pop. It’s fit to serve as a guide to any similarly minded band about how to get your message across without falling back too heavily on your influences. More than all this, though, it’s one of the most bracing, energising half hours of music to be released this year.