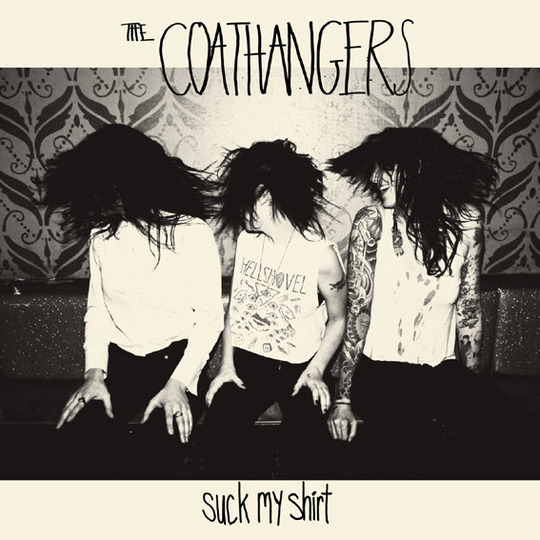 You know when you spill tequila on your shirt, leaving you option to but to promptly suck the fabric in order to maximise alcohol yield? No? Well, The Coathangers do, according to their PR blurb, and they’ve made an album that is as resourceful their drinking habits: Suck My Shirt makes as serious an impact with a minimal set up as you are likely to find; stripped back, taut and menacing, it truly is a ‘punk’ record in the traditional sense.

And I mean fast, thin and snotty punk, before it had offshoots and sub-sections. 100 Club punk. Spiral Scratch punk. Still toning itself down somewhat from the shrieks, wails and clatter of their previous efforts, The Coathangers’ fourth record is nonetheless aggressive in both its music and its lyrics: a chorus which repeats the words “Shut Up! ” sufficing within a record that matches its austerity with its interplay and songcraft.

And there is no doubt that The Coathangers know how to write songs. Each track is structurally sound, complete with middle eights, pre-choruses and all the other trappings of the verse-chorus-verse form. You know, like verses and choruses and that sort of thing. Suck My Shirt’s songs propel their power from within their admittedly rigid structures, never straying from the set course of the song. The guitars are driven and purposeful in one instance where in the next they are thrashed with abandon, fading in and out of the mix where once they were as solid and consistent as the bass work. ‘Adderall’ and ‘Follow Me’ see the vocals a hoarse, rasped growl whereas ‘Springfield Cannonball’ and ‘Zombie’ has them feel more light and consistent in their technique; in any case the band are brilliantly tight, playing off the different vocal styles and using each to their separate advantages.

Again, resourcefulness is key here. No member of the band takes more of her fair share of the limelight; each part of each track is used to further the song itself, not as a showcase of the individual. Quick drops and choruses come into play, with each member singing to maximise force: a knock out combination of rapid build and immediate payoff. On occasion, some songs play out for too long, feeling slightly out of context with the overtly punk style of the LP, but these are few and far between.

But you don’t remember the length as much as the songs themselves. Album closer ‘Drive’ is a stand out: a comparatively poppy, romantic number more akin to the likes of Bleached and Best Coast than the more frenetic, angry numbers filling the rest of the record. The track leaves things on a high note, one that is unexpected after the previous 35 minutes of cynicism and bile, the anthemic chorus and atmospheric final chord ending proceedings as well as the ferocious downstrokes of ‘Follow Me’ began them. Consistently, from beginning to end, on Suck My Shirt, The Coathangers have shown themselves to be songwriters of real ability.