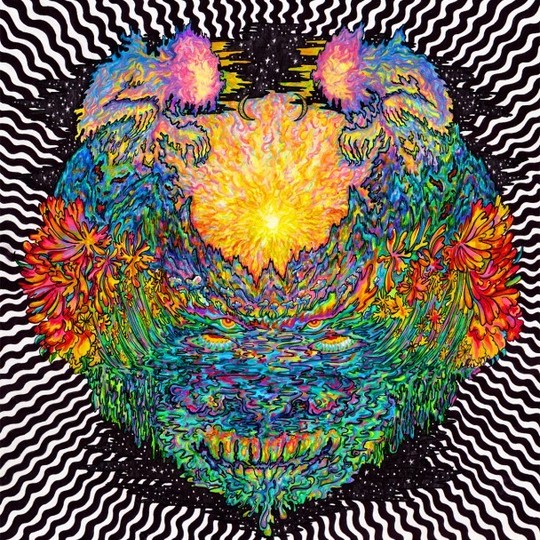 There’s a lot to love about the debut, self-titled album from Meatbodies – Chad Ubovich to his friends. It is the kind of unrestrained, unambiguous flat-out psych rock that so many albums of this genre fail to deliver on. There’s barely any subtlety here. From the moment that opener ‘The Archer’ explodes in to the dissonant riffing of ‘Disorder’, it’s clear what is going to be on offer here. Short, sharp, frankly monstrous bursts of energy abound. It is only on penultimate track ‘Dark Road’ that things slow down at all, and even then the respite is only temporary, as we find ourselves right back in the squall of crunching riffs before the song’s end.

Previously affiliated to the seemingly-ubiquitous Ty Segall, Ubovich strikes out on his own here, with help from Eric Bauer, another name synonymous with much that is good about contemporary psychadelia. One pleasing result of this collaboration is the hi-fi quality of the recording that they have produced. Often, it seems to me, psych bands wear scratchy, or lo-fi recording standards as a badge of honour. Not so here. Sonically, this is a great sounding piece of work.

At times, as the juggernaut rolls inexorably on, Black Rebel Motorcycle Club – the lazy journalist’s psych reference of choice – are called to mind. On this occasion though it is only to arouse the thought that these are the kind of songs that they wish they were able to write and release these days. It’s a long while since anything as vital as ‘Mountain’ or ‘Tremors’ found our ears from them, or any other psych band, for that matter. The latter’s sheer scale and attack is a sound to behold, actually somehow managing to evoke the feeling of an earthquake emanating from the stereo.

Another highlight is the explosive ‘Of’, coming over all Highly Evolved-era Vines before spiralling off into a squall of duelling guitars, watertight rhythmic pyrotechnics, and a gleefully-chanted chorus. Live, this, as with the rest of the album, must be a fearsome prospect.

Closing mini-epic ‘The Master’ flits in and out, providing perhaps the clearest link to the Seventies pomp of traditional psych, before repairing to a near doom-metal main groove, redolent of Windhand’s brilliant recent album, Soma. As the pace increases in the spine-tingle inducing coda of the final two minutes, before returning, finally, to a glorious, celebratory reprisal of the opening melodic figure, all that is great about Meatbodies has been exhibited in one fabulous track. There is the pace and the power, the taut tension, the nod to the band’s psychedelic heritage, and the glorious vision of a future which could be led by this exciting new band.

What we have here are twelve tracks of attitude, spice, intensity and verve, largely played at an uncompromising, breakneck tempo, but never compromising in terms of melodic accessibility or technical prowess. In short Meatbodies have produced a debut album to surprise and delight, a debut album to cherish, a surprise late contender for record of the year.