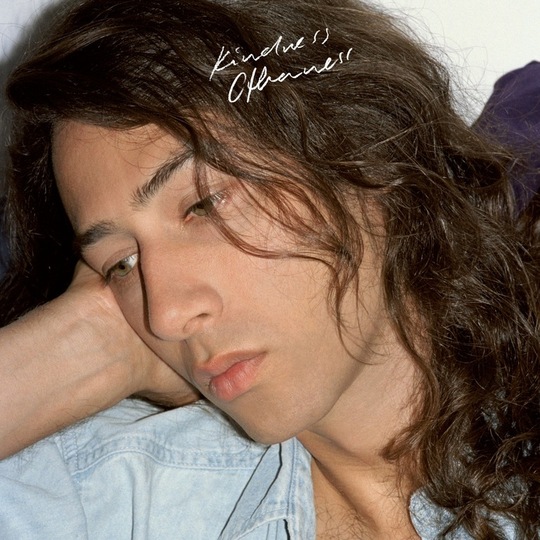 Adam Bainbridge first caught attention with the 2009 single release of his maudlin, mutated cover of The Replacements’ stunning ‘Swingin’ Party’. That track was also the unsettling, glacially beautiful highlight of his 2012 debut full-length release under the Kindness moniker, World You Need A Change Of Mind. It was a strange record, produced to ice-cold perfection but lacking the quality of songs you might expect from such a lauded (and obviously skilled) cult figure. His cover of Anita Dobson’s ‘Anyone Can Fall In Love’ served to make an already unusual release even more enigmatic, bordering on bizarre.

His live shows were, by many accounts, hit and miss affairs yet despite these apparent stumbles Bainbridge’s reputation as a lo-fi nu-soul talent to be reckoned with remained intact. Hence the calibre of collaborators he’s put together for his follow-up record Otherness, a soft, Eighties-inflected light jazz and soul record that offers occasional glimpses into Bainbridge’s more adventurous tendencies.

We have Robyn on ‘Who Do You Love?’, her crystal voice cutting through stuttering beats and bolting bass, yet delivering banal lines like “Tell me how you are feeling / Saw you while I was dreaming”. The blandness of lyrical content hijacks the record on more than one occasion, a distraction from, in this instance, a powerful vocal delivery and an excellent, jerking rhythm track.

Dev Hynes turns up on a few tracks, most notably 'Why Don't You Love Me', which is, surely, something of a tune, but also feels like a retread, a reiteration of well crafted soul-pop of the past.

Ghanian rapper M.anifest crops up on ‘8th Wonder’ rattling the listener into attention with a rapid fire verse that clashes harshly with the soothing sax (perfectly performed by Finn Peters throughout)and sweet hi hats, as well as proving an awkward foil for Bainbridge’s cold crooning of lines like “Singin’ about my baby now..yeah”. We get a harp thrown in from the obviously skilled Brandee Younger at the close which is beautiful and again, wildly incongruous.

The album’s lead single ‘World Restart’ doubles up on guests, offering us Kelela Mizanekristos and Ade Omotoya but on which the bass slapping and parping horns prove the most noticeable contributions – precise and uninspired enough to grate, generic enough to bring to mind the question of what exactly it is Bainbridge is trying to achieve here. Yes, everything is played to perfection throughout the album, the vocal performances uniformly excellent, the mix about as professional and clear as it gets, the gentle jazz feel perfectly and faithfully recreated. But was he trying to make a record that sounds like an extremely exacting homage to session player favourites of the Eighties?

If so, he does not quite succeed, as for every moment of lyrical drabness or slinky soul cliché there is a splash of bright, jabbing invention, and they often co-exist uncomfortably within the same song. That’s the case on closer ‘It’ll Be OK’ where lines like “When we first begun it was everyone” and “Don’t need no-one else, it’ll be OK” (which seem to be signs of a man sleepwalking through the song writing process with a will-that-do? shrug) threaten to overshadow the tremendously warm, atmospheric instrumentation which is otherworldly, transportive somehow.

The ethereal minor key dual vocal (Kelela returns to greater effect here) of ‘Geneva’ is impressive – a slow winter of a song that seems arranged to purposely confuse and compel, the initial refrain being reintroduced to glorious emotional effect late on in the song. Yet we still have to deal with “I’ve been searching / To give my loving to you” and the like. However, a processed vocal moment of robo-sadness at the finish closes the case on this being an album highlight, recalling much of what was interesting about his debut.

Elsewhere the Soul 2 Soul beats of ‘This Is Not About Us’ feel like pastiche rather than reinterpretation and the flamenco guitar-tinted, metronomic ‘For the Young’ is, at best, a questionable inclusion – though it is reminiscent of some of the cut scene music from Final Fantasy 7 for those who like that kinda thing.

Bainbridge’s delivery is at its finest, the album’s themes and ideas the least confused on the sexy, synth washed ‘I’ll Be Back’, which sways sadly, Bainbridge repeating mournfully, triumphally “You’ll forget my name / But I’ll be back again”. It’s a lost love song pared down to the very basics and while it does eventually outstay its welcome the impression it gives is of a passionate, smart artist with a clear, crisp idea of what he’s doing.

It’s a shame that much of the rest of the album fails to reflect that. Bainbridge’s intentions are of course only known to himself and perhaps his collaborators, but there are enough moments here to make the listener believe that staying the course with Kindness, regardless of his seemingly wilful obtuseness and contrastingly puzzling adherence to cliché, might be worth it in the long term.