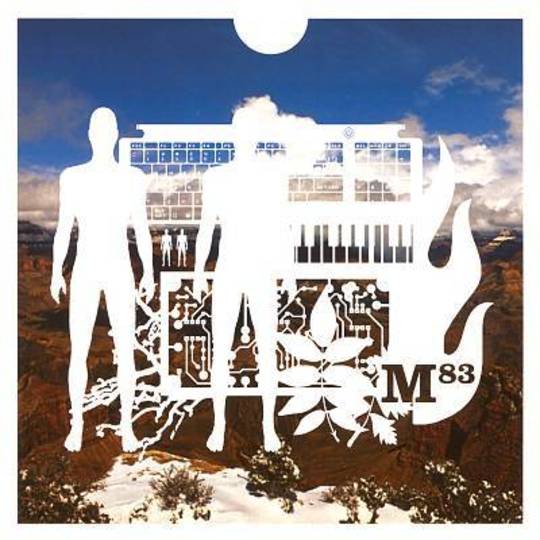 As youth began to fade, Anthony Gonzalez looked to the heavens, stretched out his arms and tried to touch the sky. To break through, even. Though he didn't quite make it, the belief was sound, the idea in place. His first record would give weight to those key initial steps, each one bringing him that little bit closer.

In 2011, now north of 30 and mastermind behind M83, he would tell Pitchfork: 'For me, the imaginary world is so much more powerful than real life, and I don't really want to be bothered by real life. I would rather live in an imaginary world forever. My music is my retreat.'

Flash back a decade. The retreat didn't belong entirely to him. The self-titled 2001 debut opened a window into the heart and mind of not just one wide-eyed boy who wished to swap out a picturesque resort town for the stars, but two. Nicolas Fromageau laboured side-by-side as hours became weeks, months, days and years. Together, through music, they searched. Adventure was paramount. Mystery? Not so much. M83 gives the game away before you've heard a note. The track listing reveals a straightforward short story comprised of the elements that would emerge as rich signatures for Anthony Gonzalez and M83; romance, longing, hope, connection, a hint of melancholy, a dash of wistfulness and - crucially - youth.

Joining dots, connecting characters, uniting hearts. Telling stories. This is Gonzalez's design. But there's room for mischief. Together, the titles tell one story. Alone, another. Some act out against their monikers - the shimmering, glorious 'Sitting' refuses to stay in one place for too long while the playfully hypnotic 'Slowly' marches busily. The first minute of M83 sounds like a warning. Careful, reverb-laden piano notes strike ominously before 'Night' falls, marrying glitchy percussion (a regular weapon throughout) with distortion and penetrating light. M83 may be heavily associated with sky-scraping, life-affirming bursts, but the initial dispatches only hint at such.

M83 doesn't charge forward. It's a patient, detailed movement, perhaps best exemplified by 'Kelly' and 'Facing That'. The former employs forward momentum before grounding it with an unwieldy vocoded sample and a lengthy ellipsis. The latter is a stretched signal, tapping into frequencies and paying tribute to kitsch science fiction in the form of dialogue excerpts. Both take the time to aim for the highest possible peaks, but those flashes aren't the point. Rare that a debut album chooses to adopt such a languid approach. M83 would draw a host of comparisons to My Bloody Valentine's Loveless, a strange choice given that it's arguably more in keeping with Isn't Anything. Stranger, still, to paint Gonzalez and Fromageau as men with their heads down, lost in equipment. Their only way is up. There's little buried here. The explosions are small, but they're dotted about the landscape. Minimalism abounds, but clarity prevails.

That landscape is important. Discovering what lies within, more so. Consider 'Violet Tree' and 'Caresses'. In the wrong context, they're repetitive and unambitious. Found, as they are, in the middle of this vast, sometimes desolate expanse, they quietly swell and soar. 'I'm Happy, She Said' connects as both accomplished closer and winsome tease of what's to come. As a glockenspiel pierces through sharp rhythm and sci-fi sentiment (that is a theremin constantly on the rise, right?), all the promise, all that star-gazing, pays off. M83's first statement is less about polished masterpieces and more a collection of abstract ideas allowed to reach out and take flight. Interludes speak as loudly as eight-minute builds. Abstract ideas claw into formation. It is at turns elegiac, static and resistant. It is guilty of meandering. But, like the stark, determined art house film that masks a lack of nuanced plotting with sheer force of will, it sticks with you long after the credits roll.

If M83 flirted with aggression, 2003's Dead Cities, Red Seas & Lost Ghosts embraces sharper edges. 'Birds', another just-under-a-minute kick-off, splices a swash of rough electronica, rising choral strings, bird sounds and emotionless, programmed speech. It's almost threatening, the listener immediately on edge. Enter 'Unrecorded' and immediate relief. The strings rise and fall in an instant, the dance of light and dark begun anew. Bedded down by a pulsing synth but guided by subtle lifts, it powers along prior to an abrupt, considered stop. Again, an androgynous, other-worldly voice speaks. It strains a little, trying to find the right words that ultimately never quite form.

'Run into Flowers', still as vibrant as immediate as anything you could ask of music, hits. Direct, clean and highly accessible, it marked the perfect candidate for lead single. Unlike many of those, it manages to distill the essence of its author without watering down. Though not a race to the finish, it injects the record with a very specific pace, only for things to slow right down again. Practically all of M83's long-form efforts are stop-start to some degree. Dead Cities… is better at this than its predecessor. The transitions aren't so jarring, either. There's even some connective tissue from previous exploits.

'In Church', naturally, goes big on an organ sound and occupies the same orbit as 'I'm Happy, She Said', acting as its eventual, solemn descent. 'America', which samples from the more contemporary Don't Look Now, is, like Nicolas Roeg's tragic horror, an expertly-constructed exercise in tension. Unlike that film, it moves very quickly. The closing stabs ramp everything up and it's a relief when it slams closed. 'On a White Lake, Near a Green Mountain', at once tranquil and trenchant, brings catharsis. And we're only halfway through.

Sonically, Dead Cities… raises the game. Everything is broader, bigger. 'On a White Lake…' may not be a 'big song', per se, but it sometimes goes huge. Same for 'Gone', whose sparse drums can, depending on the listen, hit like cannons. The synth lines on 'Be Wild' unsettle. Yet the production is never too much. Run into Flowers' is drenched in glamour but never once rings false. 'Cyborg' builds, breaks, builds, bursts and finally fades. '0078h', all manic energy, returns alien voices. What they're saying doesn't matter. How they say it does. Light and dark, real and unreal, blooming together.

Dead Cities… ends the only way it can, mirroring M83 with an epic that peters out after six or seven minutes before a wall of silence and a spiky bonus utterance bring the curtain down. 'Beauties Can Die', like its opposite number, is everything it needs to be. It starts small, builds big and burns bright. Again, the arrangement is deceptive; massive without ever once screaming. It strips down before you notice. A childlike sense of wonder acts as the heartbeat. A tiny piano shines through. A new summit reached. And M83 was never the same again.

An exit. Suddenly, Gonzalez stood alone. Talking up his Team Ghost project to The Quietus last year, Fromageau displayed no hard feelings. 'We were like old friends, old lovers, and I guess we didn't want to work together again. There were a few things that were a bit complicated between us. Not really arguments, but I guess he wanted to be on his own.'

If anything, Gonzalez needed to be on his own. Though he would continue to surround himself with skilled musicians and give them their respective moments in the sun, all would tune to his frequency. Rather than calcify, M83 expanded with grace. It might sound obvious to label Before the Dawn Heals Us as a watershed moment but this could very easily have been a farewell. With renewed focus and an increasing spotlight in place - Dawn would deliver a bigger audience, though nowhere near the ubiquity granted by 'Midnight City' six years later - the rebirth couldn't afford to be messy.

From the opening seconds, it is the sound of new life, of finding your way through potentially overwhelming surroundings. Throughout the M83 canon, there are many moments when Gonzalez captures genuine awe. 'Moonchild' may well be the most shining example. Oddly dismissed with curious venom upon its release by The Guardian as little more than 'portentous tosh' that brought Spinal Tap to mind, it is actually as pure and definitive as M83 gets. Is the dialogue, penned by Gonzalez's filmmaker brother, a tad on the nose? Pretentious, even? Sure, but for all the quiet dalliances, M83 was never about subtlety. The name comes from a spiral galaxy, after all.

As opener to a record steeped in searching light, 'Moonchild' is flawless. As announcement of the new way, it's essential. We're back to M83's track listing. The story. The rush. The emotive power of every detail. 'Don't Save Us From The Flames' crashes in, all pitch black pop, roller-coaster structure and talk of ghosts "screaming your name". Some songs will provoke goosebumps until the sun burns out. This is one of them. Like 'Moonchild', it catches Gonzalez flexing new muscles, most notably his switch to acoustic drums. Immediately, M83 feels different. Stronger. Did Fromageau object to the change? We may never know. It's not all that important. The foundations support the direction; skyward, still, but we're climbing higher, faster.

Everything is sharper. The instruments (guitar plays its most robust part yet), the arrangements, the writing. It feels unfair to suggest that Fromageau was holding Gonzalez back. Dead Cities… is a testament to the power of their collective force, yet where that record seemed content dwelling in fixed, languid settings, Before the Dawn Heals Us expands until fit to burst. It never implodes. If all three albums can be tied together by one specific thread, it is this; at no point does anything seem excessive or ill-placed or overwrought. All can be accused of a liberal attitude towards time, but none are guilty of wasting it.

Stop-start is still in play. Relentless, layered assaults 'Fields, Shorelines and Hunters' and '*' shield themselves either side with ethereal gleam. 'Teen Angst' acts as both aggressor and protector, blossoming beyond its name in a way that the similarly-themed 'Graveyard Girl' will fail to three years later. The dizzying, terrifying 'Car Chase Terror' and its coda 'Silent Night Shiver' retain an edge established by the first two albums, while 'A Guitar and a Heart' blares brilliant white. 'Lower Your Eyelids to Die With The Sun' makes it three for three for cinematic conclusions, but no time for silence now, no need to skip forwards, no chance to tune out. Fireworks dance amidst transcendent technicolour as Gonzalez meets the dreams of 'Moonchild' head-on, raising his arms as high as he can, his own personal universe glowing as promised.

Only… as personal as it is, when Dawn turns to dusk, M83 still doesn't belong entirely to Anthony Gonzalez. It was never meant to. It's for everyone.