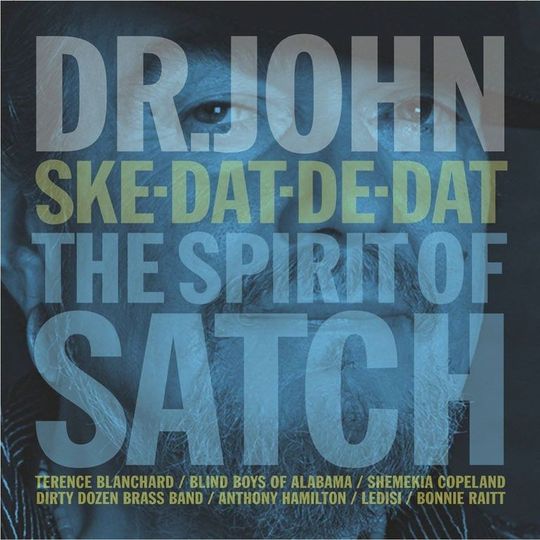 Everyone loves a superhero. Everywhere you go these days it's Marvel this, DC that. The world's gone geek and there's nothing we can do about it. A lot of this is down to how much every man and his goat craves a bloody good origin story. The tale of how the hero gained the power to take on the bad guys, one “WHAM!” at a time.

Ske-Dat-De-Dat...Spirit of Satch taps into this origin obsession. Dr John's blues infected boogie record collects 13 of the late Louis Armstrong's greatest cuts and takes them all the way back to New Orleans, one piano key at a time.

You've got to give it to John, he's manages to surgically remove the jazz with the minimum of fuss. Opener 'Wonderful World' breathes new life into an absolute classic. The song pops with a new found swagger, revealing Satchmo's blues roots. It's a refreshingly upbeat look on a world chocked full of cynicism and false grins.

Not surprisingly, the record offers a lot more than just your standard blues kicks. 'Mack the Knife' take us down to funky avenue. The song has that sweet smooth hip-hop sway. While it's not exactly Dre standard it's interesting to hear such a leftfield take on a piece of jazz history.

However, it's not long before the good doctor slips into an easy listening nightmare. The type of nightmare John Mayer has after indulging in too much American cheese. 'Motherless Child' and 'Wrap Your Troubles in Dreams' play out like elevator music for the Pixar generation. There's just too much boogie for this man's woogie.

'Dippermouth Blues' brings back the good times, albeit momentarily. You can almost smell the floor of a dusty Treme bar as the trumpet parps into tomorrow. The song does exactly what the origin tale should do, it shines a light on an unknown past, one full of whiskey, blues, and a tad of scat.

There's no doubt that Skee-Dat-De-Dat...Spirit of Satch is a project of love, but by the closing stages there's no getting away from it; the album is a bit of a... drag. 'When You're Smiling' should be a ray of sunshine, a victory lap for both Dr John and Armstrong, unfortunately, it falls short. Incredibly short. It's the type of song you'd find on repeat in a suburban rib joint. The type of place where craft beer is perpetual and moustache wax is mandatory.

It's hard not to see the album as an admittance by Dr John that the material has dried up, that there's nowhere left to look but backwards. There's nothing wrong with that, the man's already done more than enough for the music world, and, in theory, a Louis Armstrong cover record is a pretty brilliant idea. However, in reality this origin story just isn't as good as Peter Parker's. Where's the Green Goblin? Where's the death and the betrayal? And most importantly, where's Mary Jayne?

Maybe the world just isn't ready for the origin album.

Not just yet, anyway.