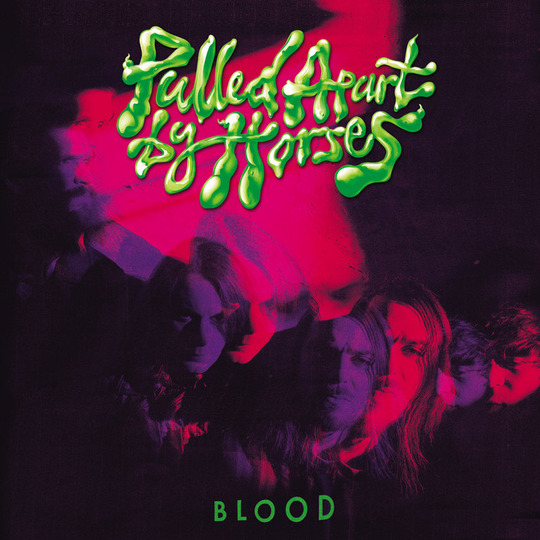 “Ah, I see you like Pulled Apart By Horses. Are you a new fan or an old fan? I loved their first album and bits of their second one, but that new stuff fucking sucks, man.”

It seems like now is the time for Pulled Apart By Horses to reach that inestimable level. The one where their public presence bloats and the prescriptivist notions entrenched within the hardcore elite thickens the underground venom to a grimy soup.

With Blood, they’ve made their “divisive record.” No punching lions in the throat, merciless Blood Brothers-esque shrieking nor a sense that the whole thing will fall apart any second. Instead, what we have here are songs. Twelve of the bastards. Hateful, isn’t it?

Although Tough Love ditched some of the careening, breakneck racket of the debut, there were still some who persisted with the notion that it was all producer Gil Norton’s fault. Once they got him out of the room, everything would return to its former state. Never mind the fact that they just covered Lana Del Rey on Radio 1.

Growth doesn’t work like that. It’s an autonomous process that occurs without permission of its host. When you reach 6’4”, you don’t pine for the years spent at 4’1”. When you can walk, read and form independent thought, you don’t gaze wistfully out of windows and long for that summer spent mashing your face against the carpet as you tried to walk from chair to chair.

If you’re looking for a bridge between ‘old’ and ‘new’ …Horses, it’s ‘Give Me A Reason’ from Tough Love. That song’s grafting of Nirvana’s old ‘Curmudgeon’ riff onto new bones would fit seamlessly here. While inspiration continues to be mined from Nirvana, it’s also drawn from Black Sabbath, stoner rock and dirty blues. All of this comes together in glorious fashion on ‘Skull Noir,’ which gradually devolves into a menacingly oppressive guitar figure that rewards and punishes in equal measure.

There’s anger here, but it doesn’t define the running time. The second half lightens up, opens out and results in tracks like ‘Medium Rare,’ which is the most conventionally pop this band has ever been. ‘Outahead’ is the same, dropping the pace and prizing melody and texture over the baring of teeth. I wasn’t going to tell you this, but I heard a keyboard and a tambourine.

In the midst of all this evolution, Pulled Apart By Horses are still fun, and the enthusiasm with which they pummelled through their earlier efforts is still present here. That knack they have for turning a song on its head and yanking it into completely unnatural, yet utterly gratifying directions? They’re still doing it, and a lot of time spent listening to Blood is spent grinning like an idiot. They’re just a more interesting and (whisper it) refined band now, moving in a deliberate manner towards a common goal that satisfied their own creative needs. Whether you like it or not, this is exactly where they should be going.