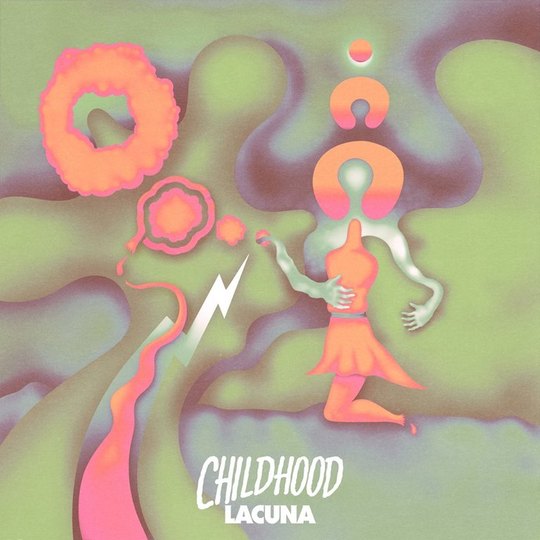 A lacuna refers to an unfilled gap; a notion that’s been applied to the studies of manuscripts, linguistics, and law.

Dictionary corner over (who said that music journalism had lost its properties of edification?), the word has now also found a very contemporary purpose as the title of Childhood’s hazy debut record. It’s arguably quite a grandiose statement for this young quartet to be making, if we’re to indeed interpret that it refers to the impact that they’re expecting to make – hell, they don’t even have a Wikipedia entry yet (a gap that’s soon to be filled, no doubt).

Childhood have been plugging away relatively quietly since their co-founders, guitarist/vocalist Ben Romans-Hopcraft and guitarist Leo Dobsen, met at The University of Nottingham in 2010. Sharing a disdain for Uni club culture but a love for bands such as Deerhunter and Air, graduation in 2012 enabled the duo to move back home to Brixton and induct fellow south Londoners Daniel Salamons (bass) and Jonny Williams (drums) into the clan with the intention of forging a very different career to that of their fellow graduates. They made a promising start: cutting a single with Rough Trade (2012’s ‘Blue Velvet’, which kicks off Lacuna in its wondrous re-recorded guise), riotous UK tours supporting best buds Palma Violets, and a spot headlining the BBC Introducing Stage at Reading & Leeds last year being just some of the highlights.

And now, having signed to up-and-coming indie label Marathon Artists, they’ve arrived with Lacuna. Helmed by Dan Carey, the production maestro behind the Speedy Wunderground series (tracks made in collaboration with artists – including Childhood - who strictly have one day to record a brand new song), his skills in the recording booth undoubtedly influenced the final collection of songs that Childhood have committed to record here. Utilising the band’s affection for psychedelic effects and spacey reverb, many of the numbers take off on an orbit that expand to the outer reaches of one’s headphones. Take the final section of previous single ‘Solemn Skies’ (subtly reworked here from the Rory Attwell produced version below), which, after a false ending, cranks into another gear, building a thumping soundscape - where entropic feedback shoots around like aural comets - that crescendos with Romans-Hopcraft bellowing like a man possessed by the musical euphoria cascading around him. Old demo ‘Chiliad’ – surely named after the mountain in GTA: San Andreas – has been beefed up to see the singer in a similarly unconfined manner, hollering “I didn’t wanna grow up because I was afraid” amongst splashy drums and gliding guitar lines.

‘You Could Be Different’, meanwhile, opens like a first cousin of The Horrors’ ‘I Can See Through You’ before settling into a hook-laden groove in its chorus that sets it apart from its more inherently experimental relation. ‘Sweet Preacher’ is similarly straightforward, with a chord-structured core that shifts the focus onto Romans-Hopcraft’s lyrical self-doubt: “My conscience pours me another round”, he intones. ‘Pay For Cool’ zips along in a first-album Drums manner, a real indie-rock merry-go-round that’s punctuated by a squally guitar solo.

It’s not all plain sailing though: the duo of ‘Right Beneath Me’ and ‘Tides’ are a little too dreamy in ambition, possessing a kind of forgettable lullaby-quality that disappoints. Current single ‘Falls Away’, albeit quite punchy in rhythm, falls similarly short through an absence of the kind of anthemic immediacy that really illuminates ‘Blue Velvet’; perhaps a product of its overly-whispered vocals.

Lacuna, then, doesn’t quite fill in a gap completely on its own, but it does lay foundations for more to come. It’s clear that, especially now they’ve released Lacuna, Childhood are indeed making the right kind of noises that’ll ably assist them in making that important career leap from dreamy infancy to artistic maturity.