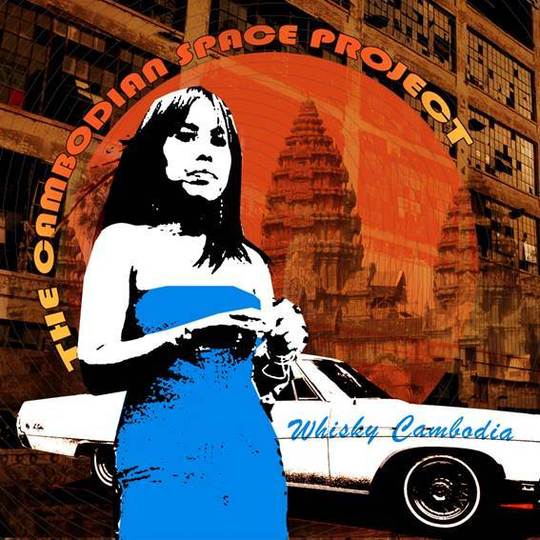 When the Khmer Rouge regime systematically murdered artists, intellectuals and professionals in their attempt to transform Cambodia into an agrarian utopia, it buried a culture in which pop music had thrived: destroying both records and the vast majority of the people that that had created them. Pol-Pot’s catastrophically brutal, albeit short-lived, reign was one that left Cambodia reeling from the horrors that he had brought upon it, with ongoing struggles against the deposed regime continuing for years after.

The Cambodian Space Project are a curious act who are intertwined with this tragedy. Vocalist Srey Thy’s parents survived the wave of murders and, as part of a wave of relative optimism following the Vietnamese overthrow, she was born to a family from which she inherited a love of music and knowledge of the pre-Khmer era of Cambodian pop. Combining psychedelic rock and Motown, presumably a result of the American occupation of Vietnam and Cambodia, this music hearkens back to an era untroubled by Pol-Pot’s destruction; a rare insight into a unique golden age that the west is largely ignorant of.

Discovered singing solo in a bar by Tasmanian musician Julien Poulsen, Shrey Thy is joined here as The Cambodian Space Project by a host of Motown musicians; it is in this combination that the record finds its success. It is a potent mix: a classic Detroit sound with Cambodian vocals that are at once jarring and infectious.

‘Rom Rom Rom’ is an excellent example. Opening with a strange, laughing vocal, horns swiftly enter and build up into a bold, optimistic track in which the instrumentalists cater for Thy’s performance as much as she does theirs; the melody unusual for the backing, but managing to find its place nicely. The title track brings to mind the more desolate psychedelics of the late Sixties, in which optimism had been replaced by increasing violence; slow, ominous and hypnotic. ‘Here Comes The Rain’ recalls Jefferson Airplane at their best, the English refrain of the chorus a nice counterpoint to the Cambodian verse which lays bare the ethos of the record and its history perfectly. A few tracks are a little trying (the melody of ‘Mountain Dance’ is particularly grating), but these instances are few and far between after one jumps the initial hurdle of getting used to the strange combination presented here.

This record is certainly an acquired taste, but it is one that pays dividends with repeated listens. There are many records that will be released this year that are better than Whiskey Cambodia, but there will be none that will be even remotely similar to it. It may be as much of an intellectual curio as it is a record, but it does a very good job of doing both.