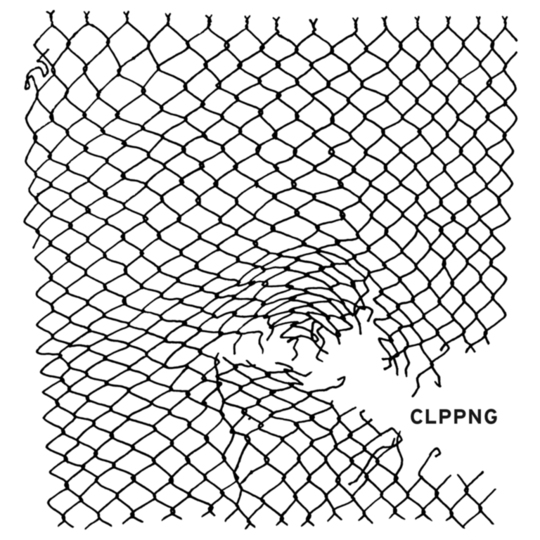 Although the second album by clipping. is one of the most singular-sounding things likely to be released this year, there’s nothing inherently bleeding-edge NOW about its sound. Rapid-fire West Coast rapping, as served up here by Daveed Diggs, could plausibly date from any year of the last 25 or so; resolve-testing tones and anti-musical digital distortion, which is presumably referenced in this LA three-piece’s name, are tricks about as old as the CD format, thus of a comparable vintage. Before clipping., though, pretty much no-one had combined the two in any notable way. A large swathe of rap’s listening public would probably suggest there was a good reason for this, but CLPPNG makes a sterling argument for the intersection of noise and hip-hop tropes.

As you no doubt already appreciate, noise – the concept, if not necessarily the genre – and hip hop have a lengthy dual history, one which will continue for as long as there are comment box crypto-racists talking about 'their so-called music' and suchlike. A potted history of the genre’s links with the (so-called) avant garde would likely include Steinski, The Bomb Squad, New Kingdom, Dälek, Anticon Records and Death Grips. While clipping. themselves are the freshest link in that continuum, they don’t sound specifically like anyone mentioned. At various points over these 14 tracks, the production of William Hutson and Jonathan Snipes (both alumni of the LA area’s avant-rock margins: think Foot Village and excitable groups like that) bears no resemblance to hip hop at all, even employing the most lateral of thinking.

The 66-second ‘Intro’ is a flat, piercing tone that signs off with an explosive digital crunch; ‘Body & Blood’, which follows it, sets an insistent kickdrum against eerie, halfway-dubbed FX fizz, the result being something that might work in a set by Silent Servant or one of that crowd. ‘Dream’ is enveloping, fuzz-edged ambience which has ‘bell’ and ‘dripping tap’ sounds, so it feels slightly less like you’re standing under an electricity pylon. And ‘Williams Mix’, which closes CLPPNG, enlists Cali-based programmer/noise enabler Tom Erbe to microsplice a huge library of samples into a brief, last-word-in-plunderphonics headwreck, using bespoke software. (A defiantly harsh send-off, albeit less troll-y than the end of ‘Midcity’, clipping.’s 2013 debut, which looped the lyric “get money” for ten Steve Reichian minutes.)

And yet: apart from ‘Williams Mix’, each of these tracks are recontextualised by Diggs’ raps, hard-nosed but deft of cadence, and fast as Twista at their WPM zenith. Assuming your rap listening habits aren’t entirely given over to Waka/Chief Keef-style prosaic surliness, he isn’t an especially wordy MC, but is in some ways an unusual one. His lyrics are exclusively in the third person, and cast him as a detached, arms-length observer, which allows him to invoke all manner of street-rap imagery without suggesting this is his lifestyle. (Guest MCs here, specifically Alkaholiks associate King Tee and San Fran veteran Guce, have no such qualms.) ‘Body & Blood’ seems to be a lurid fantasy of a female crime boss: “She got her own home, she got her own set of power tools, her own unmarked van, plans meticulously laid out, displayed on the wall ... vials of ketamine, rohypnol and promethazine, blunts with amphetamines and whatever your pleasure be.”

The women of CLPPNG are conspicuous by their agency. The protagonist of ‘Tonight’ is in a club five minutes before kicking-out time with the MDMA-induced horn and a distasteful inner monologue. His status as rap game Sid The Sexist is already in place before Gangsta Boo – best known as Three Six Mafia’s sole female MC – chimes in and makes it very clear that she calls the shots in this scenario. Similarly, the youthful and slightly squeaky Cocc Pistol Cree plays the alpha female role on ‘Work Work’ – “I been countin’ money since elementary / That’s why these broke boys ain’t gettin’ into me” – while Diggs’ character ends up dead and unheralded.

Seeing clipping. live last year – Diggs at the lip of the stage manfully hyping up a crowd of reticent indie kids; Hutson and Snipes sporting leather jackets and unleashing aural bedlam through laptops – was a fine sense-cleanser, but didn’t give the impression of any rhythmic link between music and vocals. Granted, there was probably more interplay than my layman’s ears gave credit for (in the same way that Whitehouse’s vocal tracks are structured with rare precision), but the prospect of CLPPNG being a rap album where no-one raps on an actual beat is banished early on. ‘Tonight’, the chorus of which Diggs languidly sings, is probably the closest this album comes to ‘commercial’, save perhaps for ‘Work Work’ and the spacious house loop that accompanies its hook. ‘Taking Off’ is menacingly slow and loosely dubsteppy, but the cold steel of Diggs’ delivery could well resonate with Danny Brown fans. ‘Inside Out’s fidgety rhythms feel equally indebted to 2-step and electro; combined with the beat poetry flow Diggs adopts, it’s a – perhaps inadvertent – callback to Anti-Pop Consortium, also forebears of clipping. in some ways. The position they occupy in the rap landscape, more than anything.

All told, this is probably as good a time as any for clipping. to exist. Experimental theory-spouters’ burgeoning interest in rap has frequently been viewed with suspicion, not exactly helped by things like Anticon titling a compilation Music For The Advancement Of Hip Hop. However, even without Daveed Diggs’ frequent hat tips to the canon (Biggie, Outkast, Lil Wayne, Cypress Hill, probably some I missed... oh, and Black Flag and Beach Boys for the Sub Pop heads), it would be pretty obvious he’s a child of hip-hop culture. As for the two guys clicking files behind him, regardless of their upbringing they make better foils for their MC than doubters might expect. Zach Hill’s tenure in Death Grips and the kinship of Odd Future and Trash Talk offer two vague contexts in which to cram CLPPNG, but to all intents and purposes, they’re out there on their own for now.