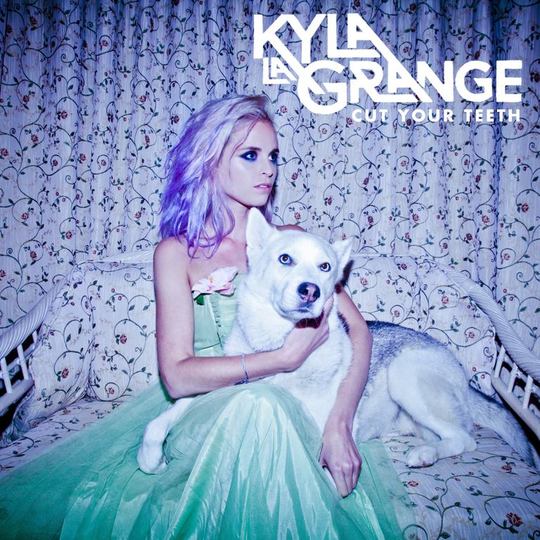 Stylistic reinvention is a chic thing at the moment: just look at Miley. As polarising an act as she may be, you can’t deny that her transition into cannot-unsee Parental Advisory waters is far more interesting a prospect than her post-Disney anonymity.

Whilst there’s no obvious evidence to suggest that Watford-born singer/songwriter Kyla La Grange took one curious look at the ‘We Can’t Stop’ furore and thought 'I’ll have some of that' (though she did recently record a spine-tingling cover of ‘Wrecking Ball’ just for shits), the transformation that she’s undergone since the lukewarm reception that greeted her watered-down folksy debut Ashes in 2012 is still quite striking. Out go the daisy chains and doe-eyed open mic naivety and in comes the house influences and an embrace of a pleasing, reverb-drenched subtlety that, rather unexpectedly, dominates her second effort Cut Your Teeth. It’s an oftentimes stunning piece of neo-pop that’s enabled La Grange to catch up with the zeitgeist that so eluded her two years ago.

Teaming up with electro producer and remixer extraordinaire Jakwob for the majority of the record, his experience and credibility with all matters programming evidently provided La Grange with the platform to realise her new musical vision in a fruitful way. Mistakenly described as 'brighter' by the accompanying press release, Cut Your Teeth chooses instead to keep its cards close to its chest, at least upon the first meet. It’s a record that demands you court it over time in order to even be invited to appreciate the true extent of its splendour.

The title track, for instance, is quite a sinister beast – you may already be familiar with a Kygo remix that’s doing the rounds, which has given it an accessible bounce that’s well-suited to some summer sojourn on an Iberian beach. But its genesis, which opens proceedings, is all threatening sub-bass and muffled beats, slithering around your headphones and squeezing you into submission. Yet it accomplishes this sonic atmosphere in a rather enchanting manner, primarily thanks to La Grange’s comforting coo: she laments about a lover never knowing her name despite her “bleeding words onto a page for you”, and you genuinely feel like shedding a tear with her. Following track ‘Maia’, however, doesn’t let you dwell upon this emotionality as it races along, powered by some stock electro rhythms and some blissful synth work to diminish any initial feelings of rawness. ‘The Knife’, meanwhile, is powered by steel drums in a very Jamie XX-esque manner, and it sees La Grange channel the persuasive vocal power of – dare we say it – Kate Bush.

There are some hiccups along the way, however: ‘I Don’t Hate You’ is a little too obvious a composition, like a discarded La Roux cut with its steadfast refrain but juttering chorus that’s made a little too in-your-face through some ill-placed Eighties drums. ‘I’ll Call You’ also suffers, primarily from being bogged down by an overly-sinister aura that’s not as well realise as Cut Your Teeth.

But for every bump, there’s the epic majesty of tracks like ‘Cannibals’ and ‘Never That Young’ that more than make up for it. The former is a sprawling piece of electronic instrumentation that builds to a stunningly cacophonous conclusion, as La Grange repeatedly choirs about “having nothing on you / You were right, I had to lose”. The balladry of the latter, meanwhile, positively glows, even throwing in some backing African-inspired vocals (La Grange is said to have been first inspired to pursue this new direction following a trip to her mother’s family’s native South Africa) and booming jungle drums. And so it seems that the transformation, far from being a miscalculation, has been a wholly successful one. Now darling of the blogosphere, La Grange has recovered from her initial acoustic misstep to find a sound that’s far more becoming of her talents.