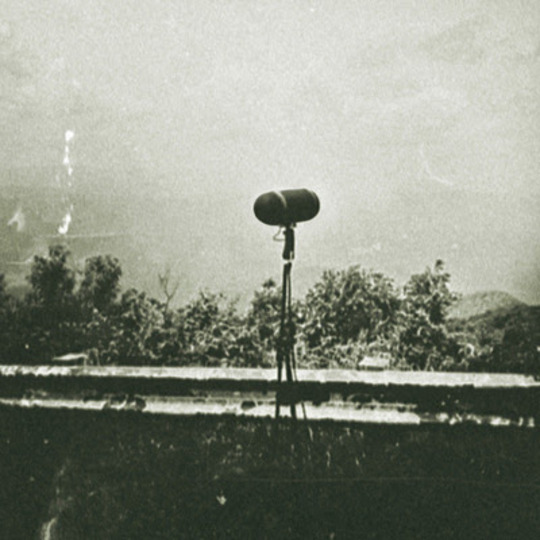 Some 17 years ago, long before post-rock became the dirty term it is today, the initial vinyl release of F♯ A♯ ∞ was put out by Constellation. ‘The Sad Mafioso’ (for many Godspeed You ! Black Emperor’s signature tune and undoubtedly their most widely heard) was first presented in its briefer, subtler, embryonic form. Rather than the aggressive ten minute crescendo we all know from the CD version, the five minute vinyl ‘Sad Mafioso’ consists only of the opening stem. The quavering slide on one guitar remains intact, and the piece’s main melody is sedately plucked out, only very briefly riding a drum beat before dissipating. The entirety of this early version of F♯ A♯ ∞ relishes this more abstract (and somewhat less energetic) version of the Canadian group. Sections that would in later edits become mere punctuation between ‘proper songs’ - the stereo delay guitar trip of ‘Drugs in Tokyo’, or the stoned soundscape of ‘String Loop Manufactured During Downpour...’ - were once centre stage.

Set Fire to Flames (a group that featured GY!BE guitarist, David Bryant and fellow founder member, Mike Moya) would later continue down the route of atmospheric sound art and musical sculpture rather than ‘songs’ and compositions, culminating with their sickly visionary second album Telegraphs in Negative / Mouths Trapped in Static in 2003 - incidentally just after GY!BE abandoned all such interludes on the solely musical Yanqui UXO. Unlike Godpseed’s fervent politics, Set Fire to Flames’ was a musical ethos devoid of ideology. It is simply concerned with twisting the aesthetic of emotion into harrowing internal dramas. Hiss Tracts feels like the spiritual child of both that early Godspeed and the brooding insanity of Set Fire to Flames - beaten, battered, heart-breaking, and at times, utterly strange.

Tellingly taking their name from a Set Fire to Flames track, Hiss Tracts is the long fermenting collaboration between David Bryant and Kevin Doria (Growing) that began with Bryant engineering three Growing albums from 2006-8. The partnership evolved, and they began making instrumental music together for the films of Karl Lemieux (GY!BE’s current projectionist). Growing shortly thereafter made its final transition from Spacemen 3 acid drone to the haphazard abstract Black Dice-influenced electronics of their final releases. However, it’s the endless drift of Growing’s formative shimmering textural epics which Doria brings to Hiss Tracts, marrying perfectly with Bryant’s sonic abstractions.

The duo produce a singularly haunting sound on their debut under the name, combining vital pre-established elements - Set Fire to Flames’ mysteriousness, Growing’s gentle meander - yet quickly establishing a signature all their own. The opening title track of Shortwave Nights rumbles to life amid a wall of mashed sound effects and static that eventually coalesce with shimmering stereoscopic guitar plucking. It’s like a blurred reimagining of Loscil's Endless Falls, particularly as the lamenting legato of cellos enter the fray. But Hiss Tracts is imbued with a funereal Montreal darkness, where the Vancouverite Loscil was oceanic and luminescent. The album moves forward as a dreamlike patchwork, with flickering dulcimers melting into decayed cassette tape drones, cut up dictaphone whispers morphing into cinematic ambience, and the ever-present sprawl of the pair’s electric guitars droning, fluttering and yearning in equal measure throughout.

‘Drake Motel / "9 Gold Cadillacs"‘ is an intriguing sidebar, comprising a snippet from one of Bryant’s field recorded interviews with a North American eccentric bizarrely waxing lyrical (something with which we should all be well acquainted by now after GY!BE put it to use on ‘BBF3’). The stranger proclaims, “the more you love people, the worse they treat you” in his throaty rural Canuck drawl. “My daddy spent millions of dollars in ‘77 trying to buy a friend, and he died without one”. Aimless old timey guitar and harmonica ramblings then take back over, suggesting music as resignation; as if the sound has a life its own free of humanly toils. ‘For the Transient Projectionist’ employs the oscillating sound of Lemieux’s 16mm projector to flesh out climbing synth/guitar drones, while the penultimate ‘Test Recording at Trembling City’ prismatically assembles a menagerie of musical detritus into a city-sized monolith of dense, dark noise.

Shortwave Nights exhumes a side of the Constellation/GY!BE collective that’s been dormant for nearly a decade. The award winning comeback, 'Allelujah! Don't Bend! Ascend! delivered the breathtaking drama that made GY!BE a phenomenon, but lacked the brooding, maniacal details and warped synthetic beauty that Hiss Tracts revitalise here. Shortwave Nights is a real enigma, and oddly addictive for it. Here’s hoping this is only the beginning for this outstanding project.