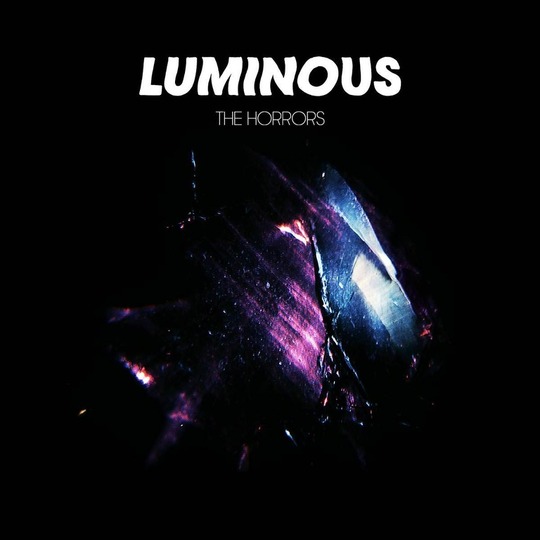 Ninety seconds into 'Change Your Mind', eight of the ten pieces Luminous is comprised of, Faris Badwan asks "Would you always believe?" It's arguably the closest The Horrors have ever come to writing a fully formed, lovestruck ballad and pretty much sums up the band's forward-thinking philosophy, venturing into previously uncharted territories with every subsequent recording.

As far back as last August, when Drowned In Sound spoke to guitarist Josh Hayward, it was clear album number four would represent another major stride in The Horrors' development.

Indeed, the level of expectation that greets a new Horrors record these days wildly contrasts with that of debut long player Strange House, an album fast becoming their Pablo Honey or This Is Your Bloody Valentine to the Kid A and Loveless epitomes of its successors. Lofty comparisons aside, there is something truly special about the way The Horrors have emerged as one of the most adventurous outfits to emerge from these shores in years. Not content to sit back and rest on their laurels. Instead, one gets the feeling they're constantly striving to push the boundaries that little further every time they enter a studio. If 2009's Primary Colours detached them from any pre-conceived comfort zone and its follow-up Skying stretch those boundaries onto next door's driveway, Luminous builds from the ceiling upwards like a mezzanine to the stars.

When the sprawling, seven-minutes long 'I See You' was made available in February of this year, it hinted at a more electronic approach than either of its predecessors (although Skying had its moments). Coming on like a twenty-first century widescreen remake of the Blade Runner theme as produced by Giorgio Moroder, Badwan's opening line "I can see your future" is a self-referential colloquialism. If the first half of the song contained all the ingredients for a perfect pop concoction, its final three minutes ventured onto another planet entirely. Uplifting melodic keyboards aided and abetted by Rhys Webb's Northern Soul bassline and Joe Spurgeon's ferocious skin-pounding served to deliver a climactic crescendo nothing short of epic.

The influence of people like Brian Eno and Jon Hopkins looms large throughout Luminous. Opener 'Chasing Shadows' could be the former producing Simple Minds, had such a pairing ever collaborated. What sets it apart from any suggestion of fan boy plagiarism are the audacious and totally unexpected twists and turns at every angle. Again, clocking in at nine seconds under seven minutes, each one as worthwhile as the next, at no point outstaying its welcome and setting the scene graciously for what follows. "Follow me to the edge of the world" implores Badwan on the swirling 'First Day of Spring', Spurgeon's impeccable rhythmic interludes again providing the heartbeat of its electro-pop veneer.

'So Now You Know', recently made available via iTunes, also dips its toes into early Eighties waters. Traces of The Human League and Ultravox can be found at its core, as probing synths toy with a seismic chorus culminating in Badwan instructing his subject to "...turn away." Meanwhile, 'In And Out Of Sight' steals the glittering disco ball from the aforementioned Moroder's living room before surrounding it with more glowing synthesized hooklines and heart-racing drum beats. 'Jealous Sun' reenacts Gary Numan covering My Bloody Valentine and ends up becoming even more futuristic in its execution. Dancefloor friendly and psychedelic in equal measures, forget prog rock, this is is prog pop. And some.

For a band whose mere existence seems to be about transcending as many genres as possible, 'Falling Star' packs at least half-a-dozen into its three minutes and 45 seconds. Subtle electronica, shoegaze, J-Pop, krautrock and cinematic ambience with a punk rock aesthetic melt into one, Badwan intoning "Now you know we're together" at the song's apex.

'I See You' and 'Change Your Mind' - both already documented earlier - steer Luminous into its final third. Penultimate number 'Mine And Yours' is the least memorable moment on the record, not so much perfunctory or workmanlike but simply dwarfed alongside such illustrious company. Atmospheric closer 'Sleepwalk' wraps up proceedings succinctly, once more heavily doused in electronic patterns and dreamy psychedelia. Finding a steady middle ground between Primary Colours' euphoric finale 'Sea Within A Sea' and the diligent tranquility of Skying's 'Oceans Burning', it's a refined voyage into the sunset that threatens to change course around the three-and-a-half minutes mark. Eloquent and peaceful til its final note signals the end, there's little else to add other than to state the obvious; Luminous marks another fitting addition to The Horrors' increasingly untouchable catalogue.