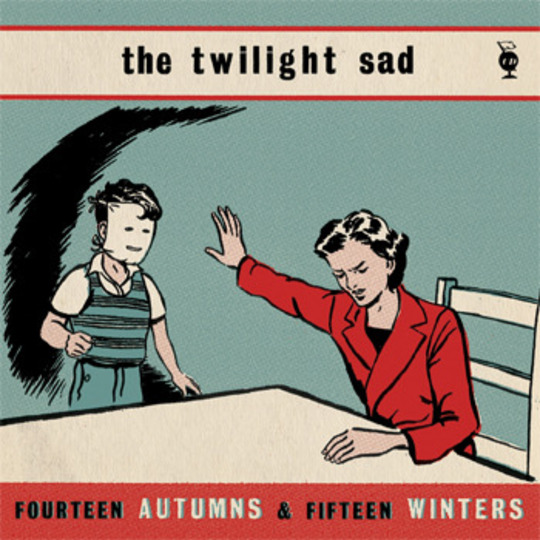 The Twilight Sad remain one of the only British bands unafraid to follow their muse, but with Fourteen Autumns and Fifteen Winters, they arrived already fully formed. Despite obvious Scottish touchstones like Arab Strap, Mogwai and Aereogramme, the Kilsyth four-piece released a debut that grew organically from accordian-led folk laments to bitter noise catharsis, all resting on James Graham's uncompromising voice. Ominous ruminations that spoke of unnamed trauma, dead animals and children on fire, Graham's evocative lyrics were delivered with utter conviction. The artwork, beautifully rendered by Dave Thomas, burrowed further within, portraying matricide and abandonment in absolute harmony with the words emerging from the speaker.

Thomas still creates their art, but everything else is up for grabs between each release. Forget the Night Ahead grafted creeping dread to icy tunnels of distortion, while No One Can Ever Know retreated further, stripping back to a wheezing electronic pulse and thriving on tension over release. Without wishing to go overboard, it felt like their Holy Bible or Closer: a brief coalescence of creativity and tumult, never to be repeated.

Where they go from there will soon be established, but in the interim they are reissuing their first statement for Record Store Day, remastered with bonus tracks and once more available on vinyl. Since it was only originally released in 2007, there's not much that needs to be tinkered with. Graham's voice cuts through a little clearer, and the details in the arrangements are more audible, particularly when Andy MacFarlane switches his guitar to a setting somewhere between 'Thurston Moore' and 'ruptured cochlea nerve.'

There will inevitably be people disapproving of a mix that casts a little more light onto the record, but it really does make for a more rewarding listen. Crucially, the songs are strong enough to flourish under such exposition. 'Walking For Two Hours' breaks hearts as well as bones, and 'Talking with Fireworks / Here It Never Snowed' features one of the most gleefully unhinged lyrics of recent times as Graham gently intones “and does your fear not grow / when you see that you're all mine / when you see that you're all mine / with a knife in your chest?”

While it's common to declare 'Cold Days from the Birdhouse' to be the record's defining statement, 'Mapped By What Surrounded Them' is its heart. A blanket of fuzz envelops lyrics that again point to unspecified childhood harm, but when the bottom drops out and Graham is left singing “and in my dreams / I watch Emily dance / I watch Emily dance” you feel slightly ashamed, like an eavesdropper on a therapy session. It's also utterly compelling.

In terms of bonus material, we're provided with early demos and studio outtakes from the recording sessions that pre-date the album. Among them, the previously unreleased 'Untitled #4' is likely to be the main draw. It comes on slowly with a fidgety tape loop before exploding into a big grunge chord progression and insistent organ swells. Mark Devine provides the song with a nervous backbone before dropping out, leaving Graham to repeat “pray for me” until the punishing finale devours the song. It's formless and a little juvenile after the exhilaration of the finished album, but there's no denying its power.

Fittingly, the reissue ends with a demo of '3 Seconds Of Dead Air.' The great 'lost' Twilight Sad song, its weariness and searing anger are just as present in this early form as they are on The Twilight Sad EP that served as their first release. It builds to a crescendo that the recording is totally incapable of supporting, and when it ends you're left exhausted as an acoustic guitar leads you out, gently shutting the door on one of the truly exceptional debut albums of the twenty-first-century.