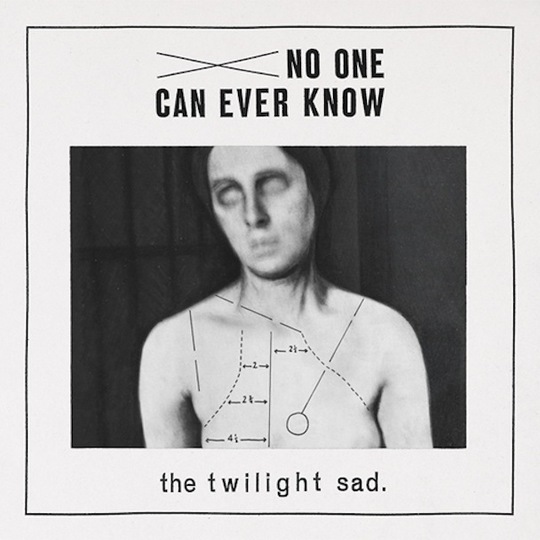 Gordie Lachance is a character in Stephen King’s uninnocence-of-youth novella The Body. It’s the unspectacular and ambitious tale of a team of almost-teen boys, each from a troubled domestic background, that set out to find the corpse of a local child who decorated an unsuspecting train while out walking in the woods. What enthralls is the boys’ journey, which hosts lucid discussions concerning their predictions for the future and the precarious nature of their situation back home. The only pressing threat is that their parents will find out where they’ve been.

It’s a handy analogy, King’s story, for this lot’s psychological, haunted venture into the strange sonic unknown. But it’s also relevant because Rob Reiner’s acclaimed screen adaptation of the book, Stand By Me, contains the quote of Gordie’s, “That summer, at home I had become the invisible boy”, which provided The Twilight Sad’s first song its title. A reference to Ralph Ellison’s Invisible Man, the clumsily poignant phrase stands up as a byword for the band’s driving manifesto - to purvey a vulnerable, vast and compelling enigma without flamboyance or falseness.

Third album No One Can Ever Know’s skill is in wielding bleak nostalgia with subtlety; boyish confusion and fear is tempered with the vague uplift of a reassuringly avuncular narrator. Which is to say, few but James Graham could imbue these songs with such a stern, easy likability. A nine-track, industrial left-turn for James and co, this marks a third consecutive triumph for the Fat Cat signatories, and one that’s best appreciated with uneasy moonlight and sandpaper-on-brain loudness. The versatility is what marks it out as their finest work: disjointed diary snippets are punctuated by unexpected moments of lyrical and vocal lucidity, while ‘Another Bed’s strobe-lit bass bob wildly out-pops the Hail to the Thief skitter of ‘Sick’. It tends to sound like the furtive Scottish lovechild of Raymond Carver and Robert Smith, blundering its way through an intensive course of emotional therapy. It’s the third in a line of abortive baby boys, beholden to a stubborn single mother in desperate need of female affection.

But it’s by keeping explicit outbursts to odd, fleeting flurries - like the faintly terrifying ‘Don’t Look At Me’s persistent yells of “I still watch you” - and then oppressing sonic indulgences, intensely, like killer wasps packed into tiny jars, that the trio retain vigour. The band’s dynamic has always been tight, rousing, but here it culminates, in broad Eighties-tinged strokes. James, a unique vocal talent, has been lazily compared to any number of throaty Scotch singing men, none of whom match his truculence - none of whom, you feel, come especially close. And perhaps prompted by the departure of former bassist Craig Orzel, the rest of the band reinforce the fort, tearing down the old walls of guitar and implementing barricades of screeching synth, while taking cues from Mogwai’s recent guide to Krautrock Theory for Noisy Fuckers on the towering ‘Kill It in the Morning’ and the violently anthemic, hoarse, six-and-a-half-minute ‘Dead City’, which delicately grumbles, “I liked you more that day / I liked you more that day / And if you all could go away / Then I would try...” before elegantly barreling into a chorus which pounds like a hard-bitten labourer hitting the nail precisely on the head.

Purer than innocence and richer than gold, No One Can Ever Know confirms that The Twilight Sad are simply too good to remain a-little-less-than-well-known outside the restrictive realms of slightly-less-than-world-conqering ’zines. These are people with a mandate to raze the roof, and cleverness, soaring ambition and all their best-laid plans to burn. At a time when you might be considered fashionable to bemoan a dearth of sincerity in popular music, let’s start by returning that irredeemable mope of a genre ‘indie’ to the criminally talented fuck-ups that wrought it.