The Way And Colour 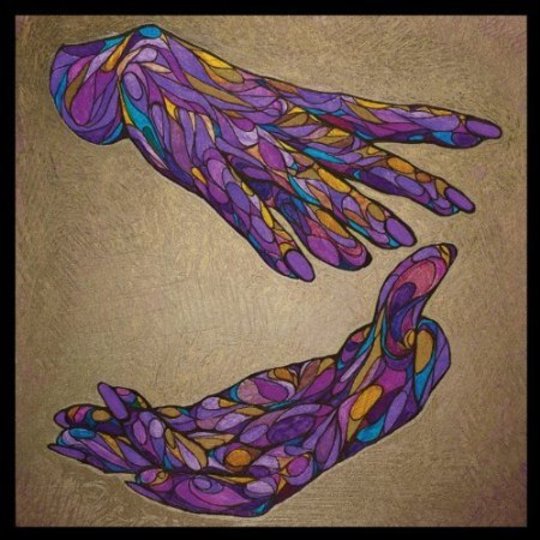 Indie pop’s relationship with R’n’B has gone, in recent years, from a sideways glance flirtation to an all-out love affair. Originally a marginal dalliance, now the mainstream of alternative pop has embraced swung drums, smooth melodies and slow burning synths. It’s hard to believe that 20 years ago, the rock avant-garde were, to quote Jerry Seinfeld, mumbled low talkers. Something about R’n’B's raw sincerity has struck a nerve with the kind of lower-middle/middle class, art savvy kids that currently make art-pop. The internet age is one of cultural sincerity: post-modernism is dead. Just see the difference between Jay Leno - cynical, overbearing, borne of a generation famous for sneering at emotion at a time when emotional expression was seen as co-opted - and his successor Jimmy Fallon: doe eyed, fiercy sincere and web savvy, every sketch designed to flit between Twitter feeds and Facebook shares, a mixture of that Nineties nostalgia and doe-eyed silliness that feeds so much of internet culture.

As post-modernism died it took pastiche with it. Frederic Jameson - bear with me - argued that when modernism commented on culture it was parody. When post-modern kids did it it was pastiche - that is, parody without the politics. It was blank imitation, blank re-creation/recreation. For Jameson, Nineties pastiche was 'amputated of the satiric impulse, devoid of laughter'. When today's alt-pop mimics culture, re-appropriates it, that laughter has been reinserted, the emotion celebrated. Dirty Projectors are especially good at this - see their joyously shameless rip of 'These Days', or their almost painfully straight cover of Usher’s 'Climax'. What’s the middle ground between these songs, what do they have in common? They’re both beautifully earnest and raw. But beyond that, in a world where the tribal lines that used to separate genre have, to some extent, broken down, it’s the listener that makes the connections, joins the dots. So what do 'These Days' and 'Climax' have in common? It’s enough to say: Dirty Projectors.

R’n’B lends itself to a culture that celebrates realness, innocence. R Kelly has long been feted by a hipster community willing to turn a blind eye - or perhaps simply unaware of - his catalogue of alleged offences. In the context of this review perhaps the key Kelly text is the appropriately titled ‘Real Talk’ - a bizarre, hilarious, unsettling rant-come-song directed against a woman accusing him of cheating. It gets to the heart of Kelly’s appeal. When fakery, irony and self-reference go mainstream (see: every major movie and advert 1995-2005) suddenly it’s ‘real talk’ that appeals.

Surreally this state of affairs was brilliantly explored by 21 Jump Street, in which the two leads go back to high school six years after graduating in 2005, only to find that the coolest kids ‘care’ about things. Channing Tatem’s character's advice to Jonah Hill on how to be cool was to ‘not care’, but in the new world ‘caring’ is mainstream, and - the movie shows - simultaneously sinister. When Ryan Hemsworth remixed 'Real Talk', it became a chirpy Harajuku pop song, but is something lost in translation? The laughter has creeped back into reappropriation, but are we laughing with R Kelly or at him? And which is worse? Have we all become that Vice correspondent, standing on the edge of Chief Keef’s yard, watching impassively as he makes another circuit on his dune buggy, not sure whether to be thrilled or thrilled? Thriller, after all, always had a double meaning - black urban culture for white suburban kids can be at once exciting and scary.

All of which is to say that TEEN have ditched the relatively straight-up indie pop of their first album in favour of a smoother, melodious sound for The Way and Colour. Or rather, singer Kristina 'Teeny' Lieberson’s voice glides beautifully over the album, breaking into harmony over jerky synths and sometimes danceable drums. Occasionally the album breaks down into informational overload - in ‘Tied Up And Tied Down’ restless vocals compete with bristling synths and staccato beats. Opener ‘Rose For You’ starts all jittery before collapsing into a sad, soaring finale. If the record sags in the middle, it picks up towards the end: ‘Toi Toi Toi’ the most immediate track on the album, followed by the best, penultimate track ‘Reconsider’ with its blend of stuttering snares and dreamy guitar. The Way And Colour ends with ‘All The Same’, a straight up slow burn ballad, replete with horns and a sighing R’n’B synth lead.

It’s a strange collage of effects and affects that sometimes don’t coalesce and sometimes do. The most interesting points of the album are those moments when Lieberson’s lyrics brush against the music - when the latent anxiety begins to bubble to the surface. Lieberson sings of being “pulled towards you / away from the things I really must do”. The record ends with her explaining: “too many doors are opening”. As Autre Ne Veut showed, anxiety is the key term that defines the contemporary nexus between avant-pop and, well, pop.

So pastiche as a mode of cultural commentary is dead, to be replaced by anxiety - our generation’s anxiety of influence, of consumption, of too much work and too little money, of the future, of the past, of dealing with so much information all the time, of death and love and hate and wanting so badly to be real and not quite getting there yet.

Anxiety of taking the disparate pieces of the culture that’s handed to us and somehow making them into something our own. Modern culture, after all, is defined as much by information overload as anything, and we - the consumers, the surfers, the savants - are the filter it seeps through. The filter (like this album) is honest, non judgmental, and the amalgam it produces is occasionally joyous. It is borne of distraction and is consumed as such. To put it another way: what do this review and TEEN’s album have in common? Me.