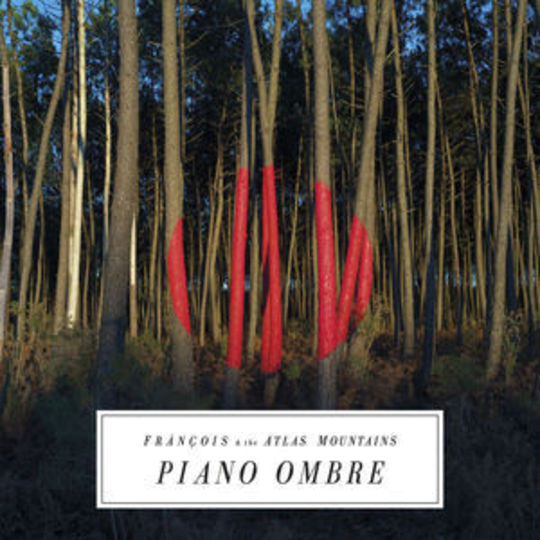 E Volo Love was a breakout album, if you will. The first major release from Frànçois & The Atlas Mountains since signing to Domino in 2011, the album saw them receive prestigious festival slots and a reputation for summery, upbeat pop tunes. Piano Ombre is their second full length offering since hitting the big leagues. Translating to 'Calm Down Shadow' - to no longer be scared by things - it seems there's been some dark happenings since their last effort. So, have they lost their knack for cheering us up?

This album was the first time that Frànçois & The Atlas Mountains were able to record in a bona fide studio and it certainly shows. Where E Volo Love teetered along without eruption, Piano Ombre waltzes in like an older brother - chest puffed and full of confidence. Opener 'Bois' is an electronical mirage of synths, brass and dry percussion, with Frànçois's gentle utterings regurgitating in whispered harmonies, mimicking his past troubled year. Swelling to a crescendo, with eerie strums and frantic melodies, this is unlike any Frànçois we've heard before. They've evolved from their earlier, gentler selves and return with a dignified, reassured force.

Like waking up from an unintentional commute nap, the frantic aspects abruptly disappear and we're transported to the band's tried and true talent for crafting a damn good pop tune. Whilst 'La Vérité' is a song of woe and broken relationships, it's infectious, layered with their falscetto backing vocals and a perfect example of the band's ability to bring together all manner of instrumentation. It's one of the first summery tracks of the year and although they've showcased songs such as this in the past, 'La Vérité' is more refined and one of the band's strongest songs to date. If indie discos were still a thing, this one would be blasting out at least three times a night.

Piano Ombre continues seamlessly throughout its journey, with 'The Way to the Forest' showcasing Frànçois' effortless transition from French to English lyrics in a single song, as the band expertly use miscellaneous percussion and belting synths. The band are able to flourish even without these aspects, as the quieter 'La Fille Aux Cheuveux De Soie' sees Frànçois accompanied only by light piano, brushed snares and gentle strings, still manages to make an impact. Title track 'Piano Ombre' is a heart-breaking output of emotion, stripping Frànçois to his lyrical bare bones, whilst 'Reveil Inconnu' picks up the pieces with a film score-like juxtaposed euphoria.

Whilst some might find the lyrics on 'Summer of the Heart' a little too obvious - cheesy even - you'd be hard pressed to resist the summery undertones of electronic claps, hushed thwacks and bright finger-pickings. This kind of execution continues on 'La Vie Dure' and 'Fancy Foresight', without the band overusing their established techniques. You'll simply find yourselves happily humming along to just about any one of them.

This is an album of established craft. For a band that have only just been given the chance to work in a bona fide studio alongside Metronomy producer Ash Workman, they've certainly made the most of it. Dignified, confident and packed full of elevating song structures, Piano Ombre is an album many will find euphorically addictive.