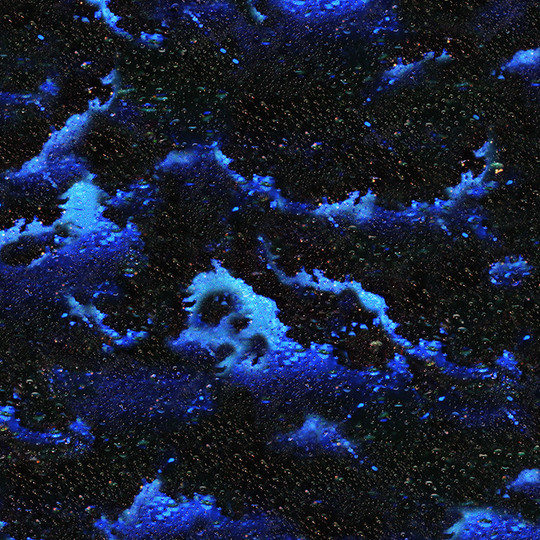 The opening few, seraphic notes of Waterfall are misleading. After a few seconds all peace is dispelled by floor-quaking subs and snares that crack like smashed glass. It is a message of intent. And a pattern which is continued throughout this challenging and often infuriating EP.

Instead of blissed out ambient collages a la Kings and Them - or pretty much anything Evian Christ aka the man born Joshua Leary has made previously - are coarse and disjointed beats, which change just as they threaten to form a listenable shape. His beats now demand centre stage. Gone are the rap bits and the hypnagogic refrains, yet the syncopated, trappy hooks are pushed to the top of the mix.

There are numerous EBM style 'drops' and teasing builds which never quite take the music in a satisfying direction. Waterfall contains many interesting passages yet few are sustained for any length of time. The middle brace of tracks 'Propeller' and 'Fuck Idol' make no concessions to a listener, and the remainder of the EP sounds like easy listening by comparison. They almost come across as demos for an artist trialling a more brutalist beat-heavy style. The main similarity with his previous work is that is is still dark: the presiding tone is one of aggression, of outright malcontent.

Whereas in the past Leary's tracks simmered away, now they combust. In seconds. Leary has cited Pete Swanson and Vatican Shadow as touchstones for his new sound, after catching their respective live shows in the past year. These influences can be detected in the newly confrontational and abrasive approach of the EP. But Leary's creations feature a precision in wholly absent in the aforementioned noiseniks. Despite this, Waterfall is unquestionably 'body music', in that its force is almost physical. Its sound design acts like an imperative to the body - to do something. This, perhaps, is where the similarities between these acts lie. The EP also contains a few moments of industrial-style noise, and its refusal to adhere to expectations of melody or structure place it in a similarly punky aesthetic.

Most of Waterfall, however, scans as an adrenalin-filled, dystopian take on pop music. It's loud, brash and demands your attention. Indebted to dancehall and grime, its rhythms confound and delight in equal measure. Noise, trap and footwork are other generic markers that rear their head, as if to spite the critic trying to pin down what, exactly, this music is. Leary's production skill cannot be faulted, each colossal sub hit seems calculated to hit in the solar plexus, and there is a scope and a clarity to tracks such as 'Waterfall'; which manage to bring a vastly divergent sound palette under control. Just.

My main gripe is that this record seems like the work of a man purposely trying to produce bangers. Save for 'Waterfall' and a few other brief moments, this collection of tracks lacks the subtle and dark textures for which Evian Christ is known. It would, admittedly, sound better in a club - and a heavy touring schedule may have resulted in Leary looking for specific material to play out. To create a specific effect. Or it may me the Kanye influence. Either way, Waterfall shows Leary willing to push his own limitations and for that he should be applauded. To demand a young producer to play it safe so early in his career is like wishing Radiohead just kept producing The Bends ad nauseum. This won't be Evian Christ's greatest moment, but it could be a crucial stepping stone.