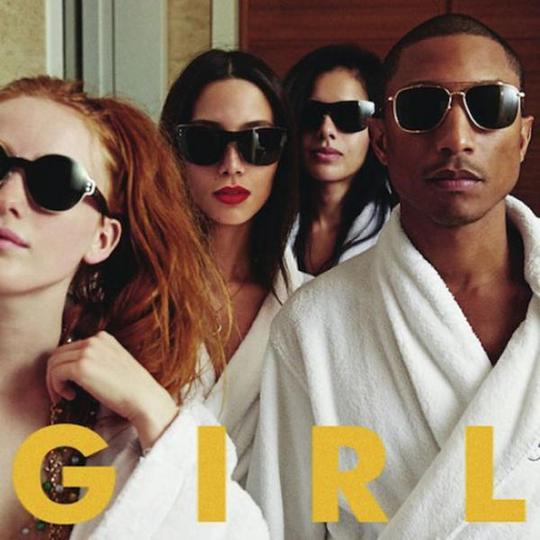 Female empowerment: a tricky issue in pop music presently. What with the ‘Blurred Lines’ Crisis of ‘13, Miley Cyrus’s horrific lack of self-awareness in her relentless pursuit of cultural appropriation, and Beyoncé’s determined ferocity contributing to an already frenzied debate about feminism's place in music over the past 12 months or so, it’s just crying out for a notable someone to stop the issue from falling into simple fodder for tiresome YouTube comment sections.

Could Pharrell Williams, then, be that noble mainstream spokesman that womankind so desperately requires with his first solo record in eight years? (almost nominating himself for such a role by naming it G I R L). Er, probably not. For a man who helmed Robin Thicke’s divisive 2013 megahit (and who no doubt reaped the financial benefits whilst dodging most of the controversy), it’s almost wholly unsurprising that his latest creation doesn’t as much promote the female cause than it does lyrically beat it with the same deplorable stick. “Light that ass on fire” he proudly proclaims on the not-for-the-squeamishly-titled ‘Gush’. A strange sentiment, it’s lazy courtship at its most basic and arson at its most literal. But hey, that’s the kind of seedy clubland shtick that Williams has traded on for so many years, so why try and renege now?

Alongside this rather predictable tactic, however, there’s also the lovable, tuxedo shorts-wearing Pharrell who’s responsible for the ubiquitous ‘Happy’, which has such an accommodating universality that even Team GB’s mediocre bunch of Winter Olympians have been known to mindlessly mime along to it in a veritable viral-craving montage. So it’s with some caution that we decry the NERD man as a misogyny-accepting enabler of fools like Thicke, ensuring that, once the sexist elephant in the room is addressed, we can try and appreciate G I R L for its musical qualities.

I say try, but then its opener, ‘Marilyn Monroe’ – co-produced by renowned violinist Ann Marie Calhoun, the only time on the record that Williams relinquishes executive control of the studio knobs, and to a woman! Fancy that – aims to praise the notion of female empowerment by namedropping a load of renowned female names from throughout history (“Marilyn Monroe, Queen Cleopatra") and promising "_not to abuse you /Since now I found you, why the hell would I want to lose you?” Form an orderly queue, ladies…

It’s alright though, because Queen of All That Is (Un)Holy Miley turns up, uncredited, on ‘Come Get It Bae’ (intentionally misspelt) to help 'turn up' affairs. And you know, it’s not half bad – her scratchy vocals actually complement the song’s neo ‘Superfreak’-esque funk. Squally guitars become a bit of an instrumental theme on G I R L – presumably inspired by Williams’ new-found BFF Nile Rodgers – as typified in ‘Hunter’ and the aforementioned ‘Gush’. Elsewhere, Williams’ esteemed robot friends Daft Punk feature on the soulful ‘Gust Of Wind’ with some automated backing vocals – sad really, as their wizardry in the production booth might have brought some welcome variation to proceedings.

Musically, this is a pleasant record, one that’ll soundtrack many a packed yet ultimately sensible party – the upbeat vibe of the Justin Timberlake-featuring ‘Brand New’ is just itching to be used as the backing music for some sentimental pan-out on The Mindy Project. But any lingering hopes that Pharrell may be wishing to morally reconcile for his part in Thicke’s mess with something so tentatively titled as G I R L should be extinguished right now.