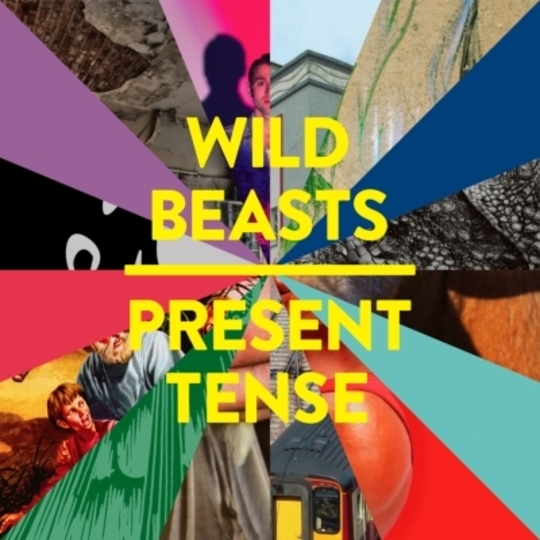 With three critically acclaimed albums already under their belts and a fanbase that rapidly multiplied several times over, it would be easy for Wild Beasts to rest on their laurels. Following Smother's release in 2011, the band spent the best part of the two years that followed touring incessantly. With life on the road understandably taking its toll, the band's decampment to their then newly acquired East London residencies found them in hiatus for a short while before embarking on the initial writing process for what was to become Present Tense.

While elements of Smother suggested a more electronic influence, the initial idea to make its successor entirely guitar-free didn't quite come to fruition. Although Smother and Two Dancers producer Richard Formby was sidelined in favour of Leo Abrahams - perhaps best renowned for Small Craft on a Milk Sea, his 2010 collaboration with Jon Hopkins and Brian Eno - and Alex 'Lexxx' Droomgoole, who'd also worked on their previous two records in a mixing capacity.

Bass player Tom Fleming recently explained to DiS the importance of 'detail' in the making of Present Tense, and how that was a key factor in both Abrahams and Droomgoole's involvement. It's certainly a record that demands to be listened to in full, preferably in isolation without any unnecessary distractions. Where all three of its predecessors came blessed with a fistful of potentially radio friendly singles, Present Tense feels like an album that was conceived in an altogether darker place.

Even though the first words uttered by Hayden Thorpe on the album declare "We're decadent beyond our means," Present Tense could hardly be described as a hedonistic document. Indeed, if Wiuld Beasts' previous records did descriptively allude to sexual relationships and such like, this one revels in a studied sense of ambiguity. Being the oldest track on the album, the aforementioned 'Wanderlust' set both the tone and standard for Present Tense, embracing techno's more dissonant end.

Rather than taking an insular view, Present Tense captures a bigger picture of the world around its creators. That's a factor never more apparent than on 'Nature Boy', its title and lyrical inspiration derived from WWF Wrestling. Heavy in synths throughout, both 'Mecca' and 'Sweet Spot' displaying pop sensibilities, as the former's rallying cry of "All we want is to feel that feeling again" gives way to the slightly cautious "We move in fear, we move in desire." And the latter, impeccably guided by Thorpe's distinctive falsetto could be the second cousin of former single 'Reach A Bit Further'.

'Daughter' also breaks the mould somewhat in being Wild Beasts' first composition to address the state of the nation, albeit metaphorically. Deftly orchestrated piano ballad 'Pregnant Pause' begins a trio of mournful compositions that punctuates the second half of Present Tense. It's on the brooding 'New Life' and poignant 'A Dog's Life'; both delivered gracefully by Tom Fleming that Present Tense scales new heights. Again, they're based on minimalist synthesizers that only add to the melancholic ambiance embodied so ornately within their words. None more so than on 'A Dog's Life', the record centre-piece that does indeed depict the end of a dog's life. "Throw a ball up into space," sings Fleming followed by what sounds like a ball bouncing inside a bin (it's actually the song of a stick repeatedly bouncing against a snare drum).

Sandwiched in between are two of the album's most accessible pieces. 'A Simple Beautiful Truth' finds both Thorpe and Fleming harmonising with kinetic perfection. Upbeat and pulsating, its possibly the most obvious candidate here for a future 45. Meanwhile 'Past Perfect' adopts the guise as the album's mission statement, Thorpe delivering a simplistic yet prophetic "It's tense for me, can't live within our memories." Closing number 'Palace', perhaps the only song here to address a lovingly bonded relationship, finds Thorpe at his warmest, declaring, "In detail you are even more beautiful than from afar." In many ways 'Palace' feels like a huge sigh of relief, possibly that Present Tense turned out the way it did.

Present Tense might lack the immediacy of both Smother and Two Dancers, but scratch away at the surface and its a record oozing with the precision and maturity we've come to expect from its creators. And in all honesty, it would be churlish to ask for anything more.