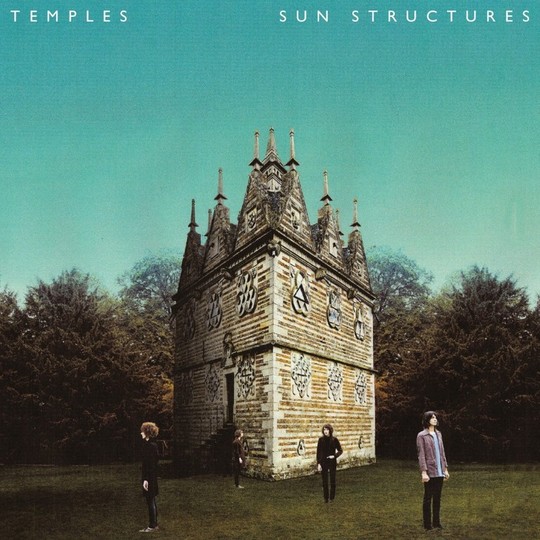 Kettering’s Temples are devoted students in the ways of psychedelia. This is a band who know their shit when it comes to getting the keyboard sounds just right, double tracking the vocals just so, letting the guitar sit in the mix just here, and creating rolling moods through the rhythm tracks. They’ve listened to ‘Tomorrow Never Knows’ a hundred million times (probably backwards, which would make some sort of sense), they know the differences between the crunchy, darker sound of British psych, of early Floyd and Soft Machine, Arthur Brown and Their Satanic Majesties, and the freewheeling, acid rock of the American bands, of the Doors and the Seeds, Electric Prunes and the Grateful Dead. On Sun Structures, their debut, painstaking work has been put into recreating the textures and the moods. Which is a problem. Sun Structures is the sound of a band playing psychedelic-style pop music - it’s not the sound of psychedelia. There are solid pop songs here, bulletproof melodies and hooks abound, but that doesn’t seem to be enough for the midlands quartet.

Unlike, say, Tame Impala, Temples never feel like they’re really lost in this music - psychedelia is supposed to pinwheel, it’s supposed to swell and evolve as the bodies producing it 'turn off their minds, relax and float downstream'. You get the feeling turning off their minds is the last thing anyone in Temples is doing: they’re concentrating very, very hard on making sure it sounds right; and that would be fine if everything else about the record, from its sound palette to James Edward Bagshaw’s hippy-drippy poetry weren’t trying so self-consciously to capture the instinctive and the spiritual. The record tries so hard to sound fluid and spontaneously creative, but in truth hangs on three or four good ideas that are milked to death. Maybe they’re just not doing the right drugs?

Sun Structures is a solid indie album with way more in common with the second hand psychedelia of the Charlatans, Kasabian and -whisper it- late Nineties mystic muppet revivalists Kula Shaker than with the trippy scenes of the swinging Sixties. And, actually, that’s fine. There’s no shame in that. These are decent tunes. ‘Shelter Song’ opens the record with a breezy summer chorus and big, boomy, baggy drums, little accenting plucks on the chord changes dappling like light on a pond. It doesn’t need its we’re-dead-mystic-we-are “ahhhhhhhhhhhh” outtro. The title track owes a big debt to The Seeds in its spooky keys and garage riffery, which is no bad thing. Everything contributes melodically here, with big hooks dripping from the guitar and organ, but it’s all undermined by Bagshaw’s none-more-hippy drivel lyrics, all references to ”sacred ground” and the ”resting place of the echoing young”. It’s not profound - it’s bollocks, and he should be above it. ”"Paradise is alive in the conscious of the brain" he sings on ‘Mesmerise’, like a bad parody of a psychedelic poet.

The reason we’re ragging on this so much, is that the none-more-trippy window dressing is spoiling some corking songs. There’s enough completely valid ideas here, whether the stonking, honking horn and ‘Jean Genie’ stomp of ‘Keep In The Dark’ or the spookypop of ‘The Guesser’ to make a punchy rock record, but the band insist they need to break every song down and build it back up again while they go “ahhhhhhhh”. What’s worse it that you become so familiar with the trick that the material towards the end of the record, particularly their wannabe-epic ‘Sand Dance’ feels tired and samey, which does perfectly decent songs an injustice.

Sun Structures is a record made with flair and skill by a band who know exactly what they’re doing - and that’s the problem. Temples are trying so hard to be something else that we lose track of who they actually are.