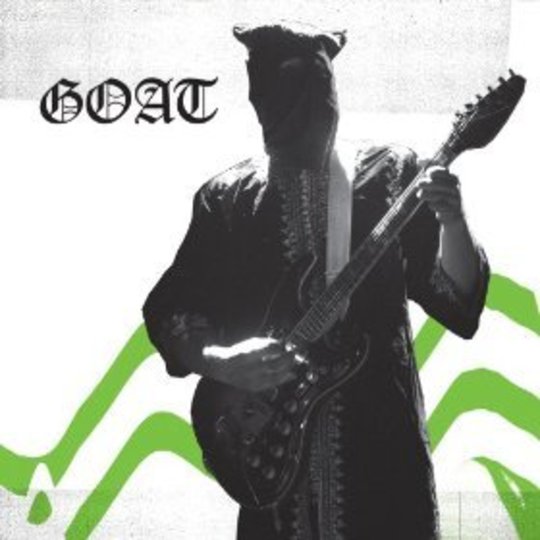 A collective of Swedish musicians in thrall to the power of a lengthy psychedelic jam, Goat blew a few minds when they first arrived fully formed last year, like a strange outpost of the Sixties frozen in time until now. Supposedly hailing from an area of Sweden that has voodoo worship and cursed towns as part of its history, the band’s media-savvy members also span a few stories about their 30-year history as an ever-revolving cabal of mystical musicians, and took to stages wearing masks, robes and an ever-present fug of patchouli and marijuana.

Luckily, alongside all this blog-pleasing rheotoric, they also had a cracking album under their belts. World Music ended up riding high in many of 2012’s best-of lists (http://drownedinsound.com/releases/17184/reviews/4145376), thanks to its mix of afrobeat rhythms, spindling guitar lines, chanted vocal lines and exploratory jamming. Backed by some incendiary live shows, Goat managed to rise above the flimsy back-stories to a place of real excitement over where they might wander to next.

Pulling on that reputation around their live shows, they’ve arrived at Live Ballroom Ritual, an album that captures a particularly immense performance at the Camden Electric Ballroom this summer. Featuring all of World Music’s tracks in a more-ragged, extended form, the live album also brings to life this summer’s double A-side single Stonegoat / Dreambuilding. So, given that there’s nothing really that new for any serious Goat Heads to get their teeth into, why should they bother with Live Ballroom Ritual?

The best live albums capture the atmosphere of what it must have been like to be there that night, and its fair to say that something of what makes Goat so special is caught here. The lazy disco swing of ‘Let It Bleed’, before it dissolves into a cronking mass of saxophones and percussion, is just as head-swirlingly funky here as it is on the original record, while the imaginatively titled triple run of ‘Goathead’, ‘Goatman’ and ‘Goatlord’ takes what we’re all familiar with and pushes them all into rougher, more raggedly exciting directions. ‘Run To Your Mama’, which in its original form was probably the band’s most immediate song, takes a much darker turn here, transformed into some wild mix of bhangra and fuzzed-up glam rock before descending into a murky well of shrieks and screams. For anyone familiar with that original record, there’s plenty of new layers to these tracks as they’re pushed and pulled in different directions.

However, a problem that dogs many live albums is emphasized even more here on Live Ballroom Ritual. No recording can ever match the visceral thrill of watching a band live, and that’s the case even more with Goat. See them in the flesh, and you see their flamboyant costumes, their presence, the sheer physical energy they throw into each song. Without that, a live album is only ever going to be pretty good rather than great. They’re a completely different musical proposition, but imagine sitting down and listening to a live Slipknot album – it just wouldn’t be the same. Goat don’t rely on theatre to the same extent as those masked goons, but there is a sense that you’re missing out on something special by not having that element to call upon here.