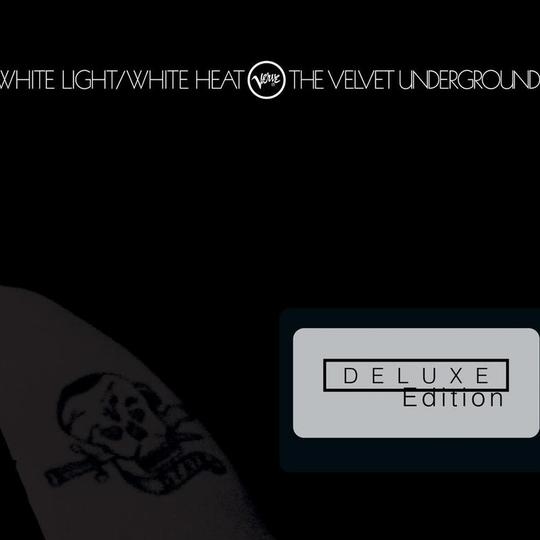 In the final two months of the year, the music industry largely changes gear. In November and December each year, new releases make way for reissues, deluxe editions and precision-marketed stabs at the holy grail of christmas number one. Many would quite rightly dismiss these intrepid back catalogue raids as a cynical way for record labels to make a sure, safe buck off the back of the gift-giving season. But they at least have some upsides - giving some added exposure to classic albums that may be close to being buried in sands of history's egg-timer, and being really handy if you're stuck for something to get Uncle Dave for Christmas. But I guess that's the idea. Often a spurious sense of occasion will be tacked onto these re-releases - 25 years since its first release, to celebrate the reformation of very old band members, etc etc ad infinitum. But in the case of this particular reissue, the forty-fifth anniversary deluxe edition of The Velvet Underground's seminal 1968 record White Light/White Heat, sometimes present day events conspire to give a routine reissue much more gravity than was originally intended.

The passing of Velvet Underground singer, guitarist and principal songwriter Lou Reed last month was met with a widespread outpouring of grief and respect. Arguably the most talked-about and lamented death in music since Michael Jackson's mysterious demise back in 2009, it had musicians and music fans alike raising a toast and reaching for copies of one or more of the classic albums he was involved in creating; perhaps Transformer, The Velvet Underground and Nico, Berlin, Metal Machine Music (if they were feeling a particularly strong need for catharsis) or indeed, White Light/White Heat. While debut record The Velvet Underground and Nico is an album so influential that Brian Eno famously observed out that it only 'sold 30,000 copies in the first five years… but I think everyone who bought one of those 30,000 copies started a band!', it's follow up White Light/White Heat that cemented Reed's place as a classic American songwriter and his and John Cale's reputations as two of the most important avant-garde musicians of the twentieth century.

The album still stands as an epic precursor to the genres that were to dominate the latter part of the century and beyond - punk, grunge, alt rock, prog and no wave all took cues from the crunchy, unhinged rock and roll experiments found here. The title track's woozy traditionalism jars deliciously with its sandpaper production, while the naive melodies of 'Here She Comes Now' belie a complex and sophisticated paean. Not to be entirely outshone by bandmate Reed, Cale's deadpan monologue on 'The Gift' is a perfect epitaph for the band's original lineup - a tale of sex, jealousy and accidental mutilation delivered in Cale's signature crisp Welsh tones on what was to be his final record with the band.

The remastered tracks, along with session outtakes and the live disc here captured at the Gymnasium, New York in April 1967, provide us with an excellent picture of Lou Reed as and innovator, as a rebel, as a poet and as a star. As unintentional as an epitaph this reissue is, White Light/White Heat may be the most glaring reminder of just how awesome the man was, and how much of a loss his passing was to western music and art. So long, Lou.