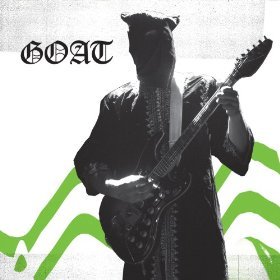 There is a sense that you’re missing out on something special.»

Following their runaway successful debut album "World Music," Swedish psyche troupe Goat took to the world's clubs and stages, stretching out the grooves and stewed psychedelia they had waxed to new heights. "Live Ballroom Ritual" was recorded on the eve of their now legendary Glastonbury performance, it truly was a band on top of their game, which this LP called Live Ballroom Ritual will forever prove. Goat went on to wow more people across Europe when their on stage rituals visited the cream of the summer festivals at Primavera, Roskilde, Flow, Way out West etc. After a long but successful summer the band are now back in Korpilombolo, writing the follow up to World Music.
description from www.roughtrade.com