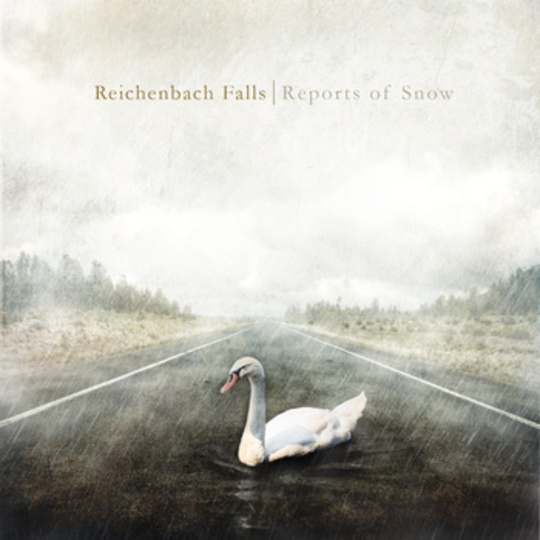 Reichenbach Falls is, essentially, the solo project of Oxford-via-Canada singer-songwriter Abe Davis - though debut album Reports Of Snow also features a varied cast of collaborators, from Cornershop drummer Nick Simms to Truck Festival co-founder Joe Bennett. It’s very much Davis’ show though, and the most immediately striking thing is how much he sounds like Elliott Smith.

Indeed, the wintery, twinkling opener ‘Drink & Drive’ also features at least a couple of lines that bring to mind Smith’s style, most obviously in its chorus lyric “she’s just another way to drink and drive.” Thankfully, this isn’t a one-trick-pony of a record, as ‘The Best I Could’ matches some equally affecting lyricism with Americana slide-guitar flourishes. Those flourishes return on ‘Blessed Blush’, a song whose opening lines also demonstrate that Davis isn’t so self-absorbed as to eschew humour entirely: “I know you wear that dress mostly to get it off/but baby there’s rain coming.”

It’s interesting to note that the two best moments on Reports Of Snow come from completely opposite ends of the band’s musical spectrum. ‘Stay Home, Elizabeth’ feels pacier than much of the record, with its wiry guitar and propulsive drumming calling to mind The National, while ‘Blinded by the Flash’ builds itself on a fingerpicked guitar line, its low-key tempo helping to focus the listener towards the lyrics - which as it happens are some of the most poignant on the record. Unfortunately, there are other tracks where things don’t quite gel together. ‘Risky’s relaxed guitar strum feels at odds with its downbeat lyrical content, while ‘The Closed Colleges’ suffers from a slightly wonky rhyme scheme (or lack thereof) blunting the impact of what should be a hard-hitting chorus. On occasion, Davis can also come across as a little too earnest, most notably on ‘In the Wreckage’, whose conclusion perhaps overdoes the emoting a little - the guitars alone would probably have been stirring enough.

There are also a couple of shorter pieces that could probably have been fleshed out into full songs: ’Candles & Thread’ is 30 seconds of reverberating guitar that suddenly fades out to be replaced by a completely different atmosphere when the piano-led intro to ‘In the Woods’ kicks in. There’s a callback to the former song’s title in the latter’s lyrics, but there doesn’t seem to be any more of a connection than that. Earlier in the record, ’Under Their Feet’ acts as an interlude of sorts with its atmospheric piano and abstract vocal coos, but doesn’t feel like it does much to connect the two songs either side of it. There is, however, another connection to ‘In the Woods’ - listen carefully and you can hear the very same vocals from ‘Under Their Feet’ in the background of that song. Although it’s a clever, self-referential moment, it’s still a shame that the ideas in these shorter songs don’t get explored further, as they could have added some extra variety to proceedings.

In the end though, the potential here has by no means been wasted, just not fully realised - Reports Of Snow is a likeable record, and one which contains every indication that Reichenbach Falls could go on to better it.