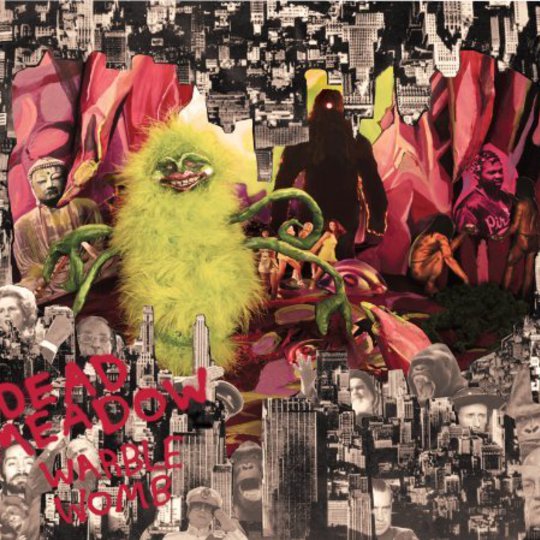 Could Warble Womb be Dead Meadow’s “Judas!” moment? Their Self 'what is this shit?' Portrait? Their Shit Sandwich?

This seems to be the gist of a thread entitled Dead Meadow RIP on the stonerrocklives.com message boards. 'Have you guys seen them lately?' enquires the thread’s author, 'I don't think corny is the word. They're trying to be a 50’s David Lynch hipster lounge act. I'm completely baffled.' Elaborating for the doubters, this virtual person (who calls himself Priest) adds that the ’Meadow 'play the old shit like they’re trying to hurry up so they can catch a plane. They took ALL the stoner out of the music. Why would they do this?' Another poster, Stickman, agrees. He saw them headlining some 'hipster fest'. After two songs, his companion yelled 'Where’s The Heavy?!' and they walked out. 'Boring is right,' confirms Stickman. MichaelZodiac enjoys their early stuff, but concurs that their newer material is 'more meh'. Greater generosity is proffered by MadJohnShaft: 'They did a beer commercial! That rules!' However, after confessing that he is indebted to 'buy their records forever' because Dead Meadow once put him on a Zwan guestlist, MadJohnShaft’s opinions cannot be considered completely unbiased nor mentally sound.

'50’s David Lynch hipster lounge act' is going way too far, but Warble Womb is unquestionably lighter than Dead Meadow’s previous psych-stoner releases and the restoration of original drummer Mark Laughlin does not signal a return to their meatier roots.

First track ‘Six To Let The Light Shine Thru’ recalls the country-tinged desert rock of Neurot's Across Tundras. Based around Jason Simon’s acoustic guitar, ‘Yesterday’s Blowin’ Back’ and ‘One More Toll Taker’ suggest the frontman didn’t exactly vent all of his singer-songwriter urges with his 2010 solo record. Dead Meadow’s Sixties influences are also floating further to the surface. ‘1000 Dreams’ and ‘In The Thicket’ have a moody Animals stomp to them. Other tracks flirt with Byrds-ish buoyancy. ‘I’m Cured’ has a groovy Revolver-ish backwards guitar effect and ‘Warble Womb I’ is a short trippy sitar jam. Everything is still shrouded in Dead Meadow’s signature heady swampiness though, so we’re not exactly looking at Moseley Shoals by Ocean Colour Scene here.

Warble Womb remains resolutely stoner in at least one respect: its length. If cynics such as Priest, Stickman and MichaelZodiac can make it through to the second half of Warble Womb’s mammoth 70+ minute running time, they’ll find Dead Meadow to be more embracing of THE HEAVY in the album’s latter stages. Here we find the rumbling, bluesy ‘Rains in the Desert’, the sleepy, shoegazing metal of ‘Copper is Restless’, and the 10-minute Orange-amped tantric fuzzgasm that is ‘This Song Is Over’.

It’s no Judas moment for me. But then, what do I know? I always thought Side 2 of Spinal Tap’s Shark Sandwich was a bit of an overlooked masterpiece.