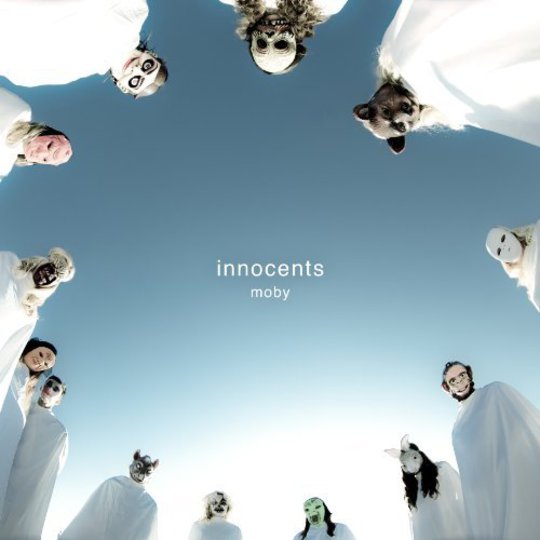 From the first swell of warm, gliding synth, Innocents is unmistakably a Moby record. The spacious soundscapes and disjointed, house-lite percussion could have been lifted from his coffee-table hit Play - it seems we’re going to be partying like it’s 1999 again.

But, maybe in a bid to avoid the overexposure that slightly undermined Play's brilliance (though being the first album in history to have every single song licenced for commercial use didn’t help), Innocents is a pointedly less radio-friendly affair. On opener ‘Everything Rises’, the epic swell that previously would have led into an ad-friendly hook now simply pushes on, a gentle, looping tsunami of epic synthwaves over those familiar, jutting beats. Later, ‘Saints’ brings the album’s biggest drum line, pure Nineties house, and the synths take off in a hymnal ascent. The indecipherable vocals echo, and another classic slice of Moby is born.

That said, much of it is unrecognisable. Anthemic joy dominates the middle of the record, with the Wayne Coyne-featuring ‘The Perfect Life’. Here bounding euphoria couples with overblown choral backing and a George Michael-worthy guitar sashay: in isolation, I would never have guessed this was Moby. The lyrics are classic Coyne misdirection, providing that Morrissey/Marr double-whammy of a jubilant melody backed by dark words. Though the first verse deceives with twist-and-shout contentment, soon the content becomes clear: “Little Mikey steps everywhere / Knives in his pockets, bullets in his hair / He has nothing to live for, nothing left to say … Spoons and foil are all he needs, a bed and some china, a lighter and some speed – it will sing you to sleep and it will hit you awake”. Well, all that ecstatic elation had to come from somewhere I guess.

Less in-your-face exultation, but still strongly Flaming Lips-reminiscent is ‘Almost Home’, a woozy, enveloping ambience featuring indie-folker Damien Jurado. The tone is exactly Play, but the hooky drops are no longer present. Elongated and leisurely, it’s more suited to sighing than dancing. Elsewhere, Inyang Bassey guests on the prowling ‘Don’t Love Me’ – a creeping blues jam laden with chips of organ and guitar chirrups and wahs over a beastly beat that calls to mind the lighter side of Elephant.

There follows a plunge into melancholia. Mark Lanegan lends his deep, gravelly presence to ‘The Lonely Night’, a country-influenced lament layered over a generic 'Moby' beat. It’s lyrically facile (“So tired wondering around and starting over / No garden grows here now, just a one-leaf cl-ooooh-ver”), but lowers the intensity in time for lengthy coda, ‘The Dogs’. Amidst the meditative pace and whining synths, Moby tells a tale where all his darkest high-vegan prophesies have become reality: “Hope lost to fear and nothing was clear when we lost it all / This is how we tried, this is where it died, this is how we cried, like the dogs left outside”.

So whilst the Nineties flavour is strong and those distinctive synths and chord progressions have returned, this isn’t a simple rinse and repeat. There’s a huge range of styles on display, but Innocents remains a remarkably cohesive and creative record, thanks both to Moby’s instrumentation and to the album’s conceptual feel. Not just for dinner parties and Eminem disses after all.