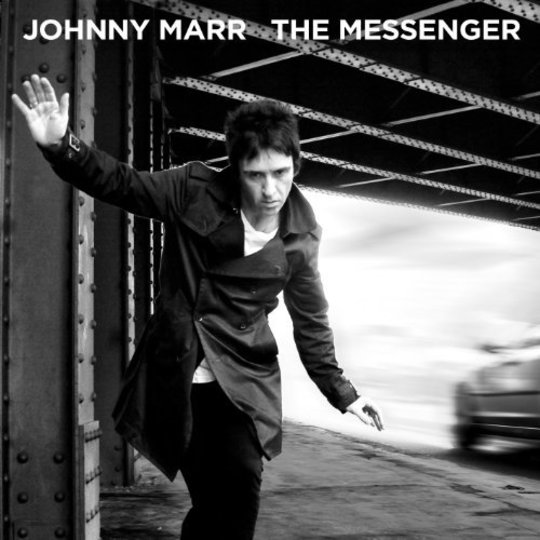 Johnny Marr has been a supporting cast member to so many in his near 30-year career that it’s nigh on impossible to count the multifarious acts that will be able to bask in his reflected celestial glory come his beatification as a Godlike Genius at the hands of NME on February 27. Despite the fact he’s contributed to a number of fruitful musical collaborations over the years - be it with Bernard Sumner in Electronic and his contributions to The The in late Eighties/early Nineties, as well as more recent successes with Modest Mouse and The Cribs - there’s really no doubting that it’s his masterful songwriting between 1982 and 1987 for which he is being bestowed the title of Godlike Genius. Either way, the timing is great for the release of what is strictly speaking his solo debut. Despite his collaborators getting their collective name on the cover of Johnny Marr & the Healers’ 2003 album Boomslang, the reason it roused interest wasn’t the enticing proposition of the combined forces of the bassist from Kula Shaker and Zak 'son of Ringo' Starkey on drums.

Although that particular album seems a lifetime ago, it merits comparison with The Messenger. In the Nineties Marr found numerous flagbearers in Britpop, from the singular and inventive flair of Suede’s Bernard Butler to the plodding bloke-rock of Noel Gallagher, for whom Marr appeared as a guest on Oasis’ Heathen Chemistry. On Boomslang Marr bore the influence of the inferior British guitar bands that he’d influenced in the preceding ten years, a record so creatively stifled it sounded like it belonged in an unthinkable dystopia where the only music that existed was made between 1994 and 1998 by men from Manchester with Paul Weller haircuts and Les Paul guitars.

Considering the comparative quality of artists whom Marr has influenced and, also worked with in the last ten years, The Messenger should by default be a much superior album. And it is. However, it still falls some way short of being a good album. On ‘Upstarts’ Marr adopts the sort of catchy taut guitars he utilised in Modest Mouse, but they can’t redeem plodding verses, forced key changes and lyrical clunkers like “ The underground is overground, the overground will pull you down”. ‘Generate! Generate!’ channels The Cribs through staccato rhythms and shouty vocals, but whenever Marr tries to up the ante the results sound forced and fall flat.

There are exceptions. The Right Thing Right’ is an urgent opener, all fierce thumping drums and crunching rhythm guitar and swaggering soaring lead guitar. Vocally Marr barks away, even whooping with the kind of goofy enthusiasm you’d expect from former Electronic bandmate Barney Sumner, to whom Marr doesn’t sound altogether dissimilar. The title track goes for a post-punk style octave-bass pulse, but slows down it down to a pedestrian mid-placed plod, whereas the uptempo album closer ‘Word Starts Attack’ nails this style with one of the best punk-funk guitar riffs Marr never shared with Modest Mouse or The Cribs.

It’s neither the guitar style you would traditionally associate with Marr, nor is it anything particularly new, but then, as backward looking as it may be, The Messenger’s highlights are two tracks which resemble Eighties indie-pop contemporaries of The Smiths; ‘European Me’ is a classic blend of jangly acoustic/nimble lead guitar with a gorgeous chorus, aided by female backing vocals, which recalls Felt’s ‘Penelope Tree’, whilst the sepia-synth backed acoustic balladry of ‘New Town Velocity’ recalls the gentle melancholic guitar-pop of The Go-Betweens. ‘The Crack Up’ is a toe-tapping number, perhaps The Messenger’s one true example of what you would except from Johnny Marr – effortless melodicism.

The one indelible impression that The Messenger leaves you with is an obvious one – that Johnny Marr needs a foil. As a vocalist and lyricist he’s pretty limited, on ‘Sun and Moon’ overextending vowels to make a lazy rhyme out of “ambition” and “television” in lieu of a chorus hook. At its worst, however, The Messenger just lacks any spark of creativity or imagination.

The concept of ‘I Want the Heartbeat’ is intriguing in a sort of ‘In Every Dream Home a Heartache’ way, a man replaces his wife with a heart-rate machine, but any intrigue is lost in the uninspired bar chords chug. If Morrissey suffers from being a caricature these days then Johnny Marr suffers the opposite problem, that he lacks any sense of musical identity and spending so long in the background seems to have left him creatively stifled. The result is a collection of workmanlike indie-rock songs that fall some way short of being a good album and a long, long way from being the work of a Godlike Genius.