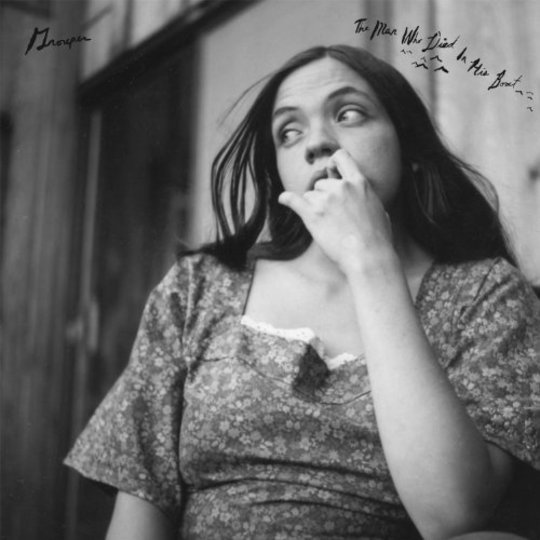 For most artists, a release of previously shunned, old material would rightly be cause for lowered expectations. Not so for Grouper, aka Liz Harris. She doesn't really do bad.

The Man Who Died In His Boat dates from the recording of 2008's cheerfully titled Dragging a Dead Deer Up a Hill. Despite being outtakes, the good news is, it still sounds like Grouper. The lyrics are still largely indecipherable yet gorgeous, the acoustic guitar is still open tuned, and the melodies remain haunting and insidiously catchy.

Harris's music falls somewhere between singer songwriter and ambient 'noise'. Rising from the Portland underground scene with a series of hiss-soaked CDRs, she has developed a formidable body of work. Her LPs also feature her own beautiful sketches, and are very much examples of the record as an objet d' art.

The titular ...Man was a sailor whose boat was wrecked on the shore of Harris's hometown when she was a teenager. The mysterious pathos of this incident suits Grouper well. As Harris explains, 'the boat never crashed or capsized....(it) just slipped off somehow. And the boat, like a riderless horse, eventually came back home.? This haunting return of an unmanned vessel is spooky in a similar way to Harris's ethereal, multi tracked vocals. On 'Cover The Long Way' a phantom choir of voices float around for four minutes, winding in and out of each other, like birds flitting in the breeze. It's as pretty as anything she's put her name to previously, yet it still manages to sound spectral and unsettling.

The main difference between this and any of Harris's more recent work is the significantly sparser production. There are none of the foggy piano drones which saturate much of AIA and even less of Harris's much loved effect pedals. The result is a less cavernous and more intimate record, which is largely acoustic led. Though still a long way from 'folk music' the more organic backdrop for Harris's voice is a welcome change. On the magnificent 'Towers', for instance, it's simply her and two guitars, and the effect is chillingly good. Songwriting of this calibre needs no embellishment.

The accusation of monotony, or too similar sounding songs, is just about the only valid criticism I can think of to level at Grouper. But to take each song separately is to miss the point: it's useful to view Grouper albums as one continual sound, one without any ipod friendly singles, or obvious peaks and troughs. Instead, as on The Man Who Died.., there are subtle but definite changes in mood, and each song (of which none are bad) simply segues into the next almost imperceptibly.

Make no mistake, this is serious music which seems designed for perusing lyric booklets in darkened rooms. And there's really no way to analyse it without taking a similarly solemn and intense approach. 'Vanishing Point' is the most abstract song on the album. It revolves around a ghoulish piano line which follows a minute of eerie hiss. Its echoing keys resemble less a melody than a texture: water trickling over rocks, or the irregular scurry of human thoughts. Perversely, its power comes from this dissonance; its very lack of order. And its positioning before the most conventional piece on the album, the almost camp-fire like title track, is genius: akin to a diver coming up for air, surfacing after a lengthy immersion.

On the record's cover there's a monochrome photograph of Harris's mother in which she appears lost in thought, nervously peering at something just out of shot, fidgeting with her hands. What at first glance looks like a simple portrait shot of a woman in a pretty dress, on closer inspection becomes fraught with mystery: what is she looking at? Why is she distracted? Is that body language defensive/ embarrassed? All unanswerable questions, yet no less intriguing for that. Harris' music works in a similar way. Despite its hushed and calm exterior, Grouper has a dark and troubled core.

This is music that challenges and provokes. It may require a bit of effort to 'get' Grouper, but it's worth it. And as this record illustrates, even her cast-offs are stunningly good.