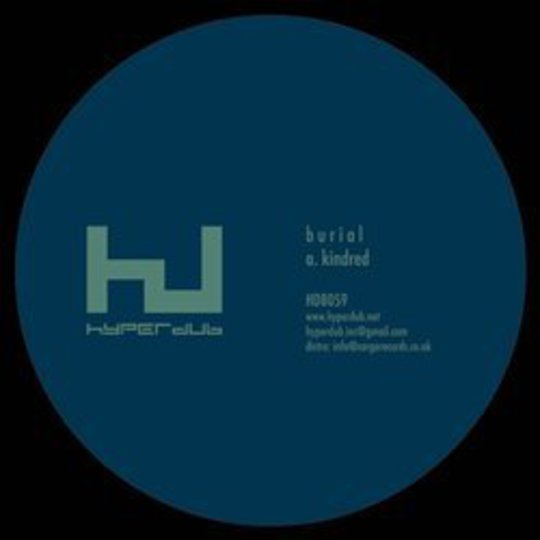 To anyone who’s been under a rock for a week, Kindred by Burial, aka the Milk Tray man of dubstep, has landed. Snuck out last Sunday, it’s made the entire internet shiver, not least because it confirms that, after last March’s Street Halo, the elusive Will Bevan is still alive. Kode9, Burial’s minder, tweeted that this one would 'def be less than 25 quid' and he’s not lied - it’s a tenth of that over at the Hyperdub website. In three tracks and 30 minutes it shows a more revved-up sound for the recluse, and has already driven scores of bloggers to spew out praise like the proverbial million monkeys.

Well, this is monkey 1,000,001. Bevan has successfully morphed from the boy outside the nightclub to the boy who’s gone back in, found a space and danced like he’s wired up to Guantanamo. Although 'Kindred’ begins with some familiar ingredients - rain, mess, burning cellophane - there’s something rougher behind them; a setup for the beats which contain Burial’s angriest low-end to date. With bass like storm clouds and drums like the Chinese new year, it takes all of two minutes for Bevan to arrange his scrappy beats/soaring chords/vocal pitches, which climax as the melody takes off, the closest he’s got to romance so far. It runs for 12 minutes but Bevan keeps it shifting, like he’s composed while listening to Pink Floyd.

B-side ‘Loner’ - the most predictable Burial track title to date - is also his most upbeat, featuring a sci-fi feel and the 4/4 dance beat he’s avoided thus far. Could it be he’s gone outside? “There is something out there” growls a voice, a quote from either Woody Allen or Mallrats, before Bevan lets rip with chattering sirens, brewing up dubstep for astronomers. ‘Ashtray Wasp’ is ‘Loner’s reflection, all warm Berlin electro and remnants of Bevan’s time with Thom Yorke. The driving lights, pop allure and soul lyrics will give a Swedish massage to his fans; the detour into psy-trance might alienate any of them outside of Germany. Still, it’s enough give pause to those who’d branded him a one-trick pony, and offers the least-obvious finale to the snippet Kode9 premiered last year.

It almost feels gluttonous to heap more praise on this record, but perhaps that’s the aim of Kindred: a moment of unity after the 50 minutes of detachment on Untrue. Burial’s toolkit of seismic bass and litter has been given a severe pep talk here, with each part of Kindred ducking and weaving - think ‘Paranoid Android’ written in SoundForge. Will Bevan’s done the unthinkable in managing to both appease and pull the rug out from under his fans. If future EPs are as solid as this, he can keep that third album under the grill forever.