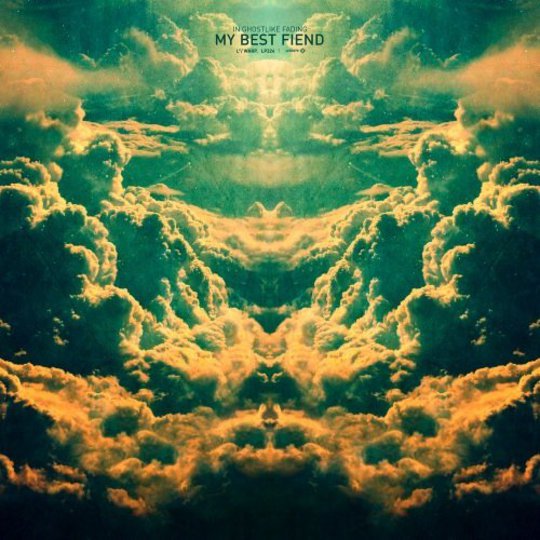 To its credit, 'Higher Palms’ makes for a promising start to the debut album from newest guitar-act-on-Warp My Best Fiend. Opening with a lilting riff, the guitars intertwine with the keys beautifully, creating a nice bedrock upon which My Best Fiend develop a strong melody and shifting textures. The chorus has punch, the song has structure, the arrangement has dynamic - it’s no bad opening to In Ghostlike Fading, and deserving of the early attention it garnered for the Brooklyn five piece. Sadly however, it’s a song which is largely anomalous on a record which soon gets stuck in a rut of its own making, frequently emulating similar-sounding contemporaries, and coming up short in the process.

Even this album’s press release can’t sidestep the obvious comparison with Spiritualized, so it’s pretty much impossible for a review to avoid it either, and just as hard to spin it as a positive. These songs are draped across frameworks built by Jason Pierce: lazy two chord shuffles, slowly expanding to transcendental textures of fuzzed out guitars, driving mid-tempo drum beats, and gospel singing. The problem is, this construct has arguably already been perfected, and has definitely already been photocopied to death. Songs like ‘ODVIP’ fall vastly short of the benchmark - the tuneless chorus failing to capitalise on the should-be peak of texture; more turgid than transcendental. Throughout the record, the amount of time we spend meandering through passages of acoustic guitars shuffling between two, grey chords is almost always completely disproportionate to the release of the songs’ lacklustre pay-offs.

As might be expected, the greatest results on In Ghostlike Fading arrive when My Best Fiend stop pussyfooting around and throw themselves wholeheartedly at the sound they’re trying to create. The best example of this is ‘Cracking Eggs’, a song which moves through the gradients of its texture efficiently, building its pressure at an admirable pace. After arriving at a satisfyingly uplifting holler of “oh-hhhhhhh daaaaarlllin’” (Fred Coldwell's colourfully nasal tone being one of the things he definitely has over Pierce, by the way) the song escalates into a torrent of wailing guitars and intensifying drums - one of the best examples of My Best Fiend sounding like they’re genuinely losing themselves in their sound, rather than dogmatically striving for a paint-by-numbers spiritual(ized) climax. High points also occur when My Best Fiend feel confident enough to abandon this familiar construct entirely, such as on the already cited opening track, or on ‘Cool Doves’, a song which doesn’t build to the band’s usual viscous climax, but slinks its way though an understated and sultry vocal hook - a turn not only well executed in and of itself, but a breath of fresh air by virtue of providing variety.

Sadly, moments of well executed originality are thin on the ground, as indeed are examples of the band effectively channeling the transcendental shoegaze of their established contemporaries. Songs like ‘Jesus Christ’ and ‘In Ghostlike Fading’ barely get off the starting blocks, lacking the intricacy of texture or strength of melody required to deliver something so ghostly, while the religious swell of stuff like ‘ODVIP’ and ‘One Velvet Day’ come across as coldblooded imitations of already perfected blueprints. At the height of its powers, In Ghostlike Fading often succeeds in delivering the raw intensity and spiritual empowerment that we’ve come to expect from this sort of music - but that’s to hit the problem squarely on the head: we’ve come to expect it.