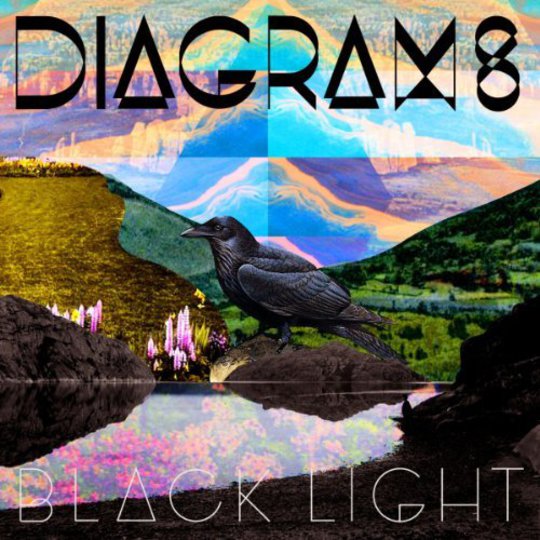 Scattered throughout the press release for Diagrams' debut album Black Light are continual variations on the word pop: 'minimalist pop'; 'funk pop'; 'dubby pop'; 'leftfield pop'. It sparked a memory of a conversation I had with a friend many years ago about what the true definition of pop music actually was. He argued that the likes of The Beatles were pop, as they were 'popular music'. My argument was that I saw pop as being more a specific melody-driven, dance-beat orientated construct born out of music becoming a consumer product: an attempt to fit the shape to the hole rather than build the perimeter around the shape. Of course, we quickly moved on when seemingly more important topics arose (like constructing and conducting a 'world cup' of girls at our school...as you do) but for some reason, this conversation has always stuck in my mind. As I’ve grown older and wiser, I’ve realised that things aren’t that simple to pigeonhole. Yes, we have and always will have consumer pop which can range from the utterly sublime to the grotesquely ugly. But over the course of the last 50 years, pop has twisted itself into new and weird ways. For example, were Talking Heads pop? On the surface, probably not. But when you explore the melodic constructions, dynamics and golden choruses, they had more in common with conventional pop than many would care to admit. The rules have changed now; the boundaries are no longer so simple to define. So after all that, my friend was probably right. The sod…

And these cracks between definitions are where the seeds of Diagrams (the product of former Tuung frontman Sam Genders) grow from. Essentially, Black Light sounds like Tom Vek giving Sufjan Stevens a piggyback with Gruff Rhys and Guy Garvey looking on and yelling encouragement. It is a sumptuous blend of jerking rhythms, sweet melodies, sonic oddities, electronic loops, acoustic guitars and gruffly endearing admonishments. Much of it is comprised of taut white-boy grooves, as neatly emphasised on the euphoric ‘Tall Buildings’, the alternating wire-strung snap and orchestral swells of ‘Appetite’ and the Vek vs. Elbow tussle and skitter of ‘Mills’. Diagrams are however, remarkably adept at developing neatly ramshackle bric-a-brac’s of a softer nature: opener ‘Ghost Lit’ and ‘Night All Night’ being particularly striking examples of this. It manages to do an approximation of ‘Close To Me’ by The Cure at a Laser Quest disco on the title track and even twists the melodic fanfares of Sufjan’s ‘The Tallest Man, The Broadest Shoulders’ in a weirdly wonderful manner on ‘Antelope’: this is not an album lacking in confidence, ambition or skill. The closing ‘Peninsula’ wraps everything up in a suitably epic manner: the warm, sweet introduction building into a marvellous electronic charge towards the finish line. Throughout it all run a continual series of neatly tessellating rhythms – rhythms that change and vary but eventually re-appear around the record in a cyclical manner. It is this commitment to the beat and the groove that ultimately helps to pin the record together, allowing the free-form ideas and melodic prettiness to bloom without any concern or threat.

Aside from the quality and continual innovation, one of the strongest compliments that can be given to Black Light is that each and every track sounds distinct and individual, suggesting that Genders has chosen to intentionally vary his angle of approach. I’ve always considered that to be a mark of both quality and confidence in a musical outfit: it is very easy to simply repeat but more challenging and ultimately rewarding to vary, reframe and reposition your sound. If there’s one thing to consider putting on the Diagrams wish-list, it is that one or two stridently mainstream-orientated singles could very easily push them into the centre of public attention (in the same way that Hot Chip achieved with ‘Over and Over’). Whether Diagrams actually want this is another question entirely, but in a just and fair world, many more people would be listening to music of this undoubted calibre. And after all, the likes of Talking Heads and The Beatles got away with the weird and darkly experimental stuff because they surrounded them with gleaming and easily accessible gems.

Ultimately, despite the cerebral design of the record - its intelligently constructed archways, its tastefully decorated corners and its whip-smart grooves - the feeling I walked away from Black Light with was one of joy and intense satisfaction. And ultimately, isn’t that - aside from any genre definitions or boundary lines – the true definition of great pop music? Words are interchangeable, feelings less so. A delightful and thoroughly rewarding piece of work.