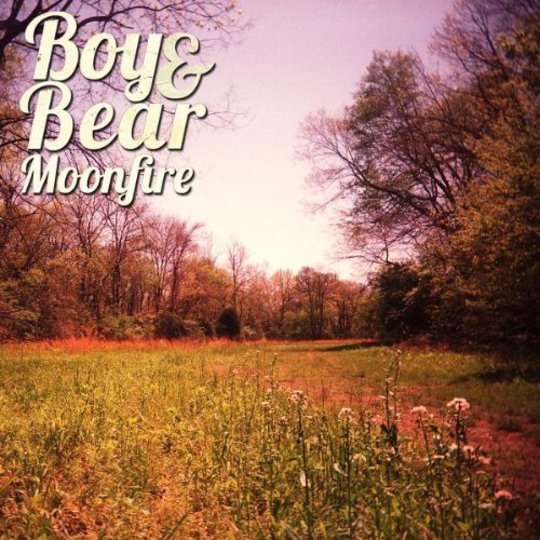 If there’s one thing folk music needs, it’s authenticity. Take Woody Guthrie – he was perfectly placed to sing stories about the troubled times he lived in, because by sitting in the midst of the Dust Bowl he was able to see first-hand how the Great Depression ravaged his country. His account of America in the Thirties is genuine, and that’s part of what makes it definitive folk music. You can also look a few decades later at Bob Dylan – clearly there’s far less autobiography in his work, but he embodies characters so vividly that the image of him wandering down Desolation Row with T. S. Eliot and Cinderella doesn’t seem so fantastical. He makes the unbelievable, believable.

Unfortunately, authenticity isn’t a trait that’s survived enough generations to have reached Boy & Bear, because on Moonfire they have a habit of sounding like Burton commercial set in a barn dance. Effectively, they are Australia’s answer to Mumford & Sons, and just as it’s hard to believe Marcus Mumford’s waistcoat-wearing public persona is anything other than a PR manoeuvre, something doesn’t ring true about Dave Hosking’s idyllic adolescence as told on Boy & Bear’s ‘Part Time Believer’, where he sings:

“I remember sitting back on my balcony

I was a-listening to The Rolling Stones.

See, I was waiting for my dad to come home from work

So I could show him all the chords that I’d learned.”

It’s an image plucked straight from a schmaltzy Hollywood heart-warmer, so truthful or not, it’s more than a little bit naff – and it’s not an isolated incident. The cringe-o-meter shoots off the scale by the time the bumpkin beat of ‘Golden Jubilee’ comes around, with its painfully wholesome harmonies and rootin’ tootin’ rhythm, coming to a graceless climax with a guitar solo seemingly learned from a ‘rock guitar for beginners’ tab book, followed by a nauseating celebratory whoop.

That said, it’s a shame that these incidents are what sticks out about Moonfire, because although there’s little here that implants itself in your memory, you can find some enjoyment all the same. Sprawling opener ‘Lordy May’, for example, blows a contemplative breeze as hymnal piano and lush mandolin gently compliment Hosking’s Robin Pecknold-meets-Jay Jay Pistolet vocals. The album’s final minutes are better still, as the draining insecurity of ‘Beach’ becomes a ruthless rock opus, before ‘Big Man’ calms things back down again with loose arpeggios resting on soft bed of light organ and distant chants.

Sadly, the bulk of Moonfire is not so arresting: ‘My Only One’ is dull and lifeless; ‘House and Farm’ has a Gallic twang that has none of the energy or emotion of, say, Beirut; ‘Feeding Line’ has a dramatic thump that dissolves into a dreary chorus. As is so often the case, these songs aren’t poorly put together or shoddily performed – in fact, the tightness of the many vocal harmonies and the breadth of indie-folk timbres on Moonfire show a great deal of accomplishment – it’s simply that they don’t tell us anything about the world in which they were written or what goes on in their composers’ minds. As a result, Boy & Bear sound more like a personality-free replica of a radio-friendly sub-genre of the folk tradition, and fall way short of convincing us that they’re the real deal.