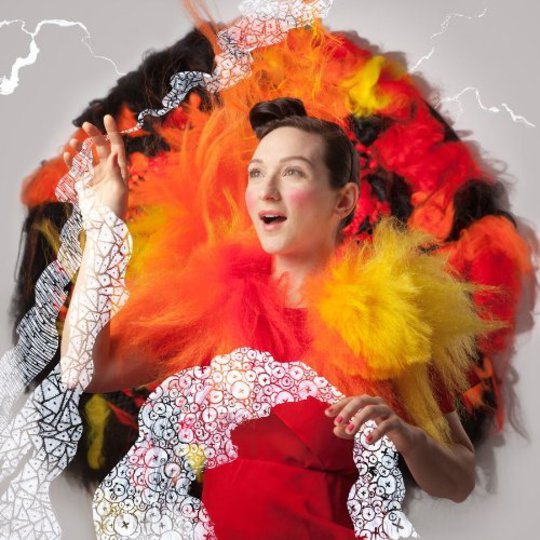 For her third full-length album, My Brightest Diamond (aka Shara Worden) has taken the yMusic chamber orchestra ensemble under her wing and furnished them with an album’s worth of material to dress. The revered collective have previously worked with slightly-higher-up-in-the-indie-hierarchy artists such as Bon Iver and Anthony & The Johnsons and lend much to Worden’s creations.

Worden has a playful turn of phrase - not dissimilar to Mary Lorson at her best – and buoys it with theatrics, akin to that of Amanda Palmer. All Things Will Unwind constitutes a parade of beautifully choreographed emotions; the album reads like a film. That is not to say that it has an air of a soundtrack, but that it is a film in itself; every sense is plundered; the story plays out before your eyes. Each track has the sense of a mini-saga; film-noir drama seeps from the semi-silences and anticipation hangs in the air.

Opening track ‘We Added Up’ is a delight, gently teasing like Eartha Kitt caught up in a game of opposites. ‘In The Beginning’ has an earthy ‘70s songwriter vibe and ‘Be Brave’ (the recent single from the album, remixed by Son Lux and Prefuse 73) lurches into a more contemporary sound, recalling the lively temperaments of Frida Hyvonen or Jesca Hoop. At times, the arch tone of the album can grate; the sense of drama gives off the impression that the entire record was produced on tiptoes, on a cliff edge, whilst a kohl-eyed circus performer slowly crashes to the jagged rocks below.

Lyrically, though, Worden reigns in the theatrics and whilst some of the story gets lost in the orchestration, sometimes, words and language poke their skulls above the parapet: “she does not make the history list… she does not brave the war / but she saves the day.” She creates such powerful imagery from simple lyricism, at times like this it feels like alchemy. The comfort blanket of DM Stith’s voice on ‘Everything Is In Line’ (he co-wrote the song) breaks up the tone of the album, his timbre sits perfectly with Worden’s; the symbiosis is heavenly.

The final track, ‘I Have Never Loved Someone’ – despite the inexplicable squeaking sound that conjurs an image of cheap routine sex on a set of over-worked bed springs – is a sublime parting gesture. A paean to her child, it recalls elements of ‘I’m Keeping You’ by Tanya Donelly in its stark expression of sheer devotion. The track is layered with multiple vocal harmonies and send out the album with the line “you’re ok” repeated over and over like the world’s coolest lullaby.

My Brightest Diamond has always had one foot in the avant-garde and this collaboration with yMusic feels natural; inevitable, almost. All Things Will Unwind is a seriously accomplished piece of work; a hefty nod to musical study and academia but never weighed down by it. Each track has real heart and a warmth that draws you to it. This album sounds more rounded and more complete than her previous releases; the sound of an artist truly ARRIVING and ready to play.