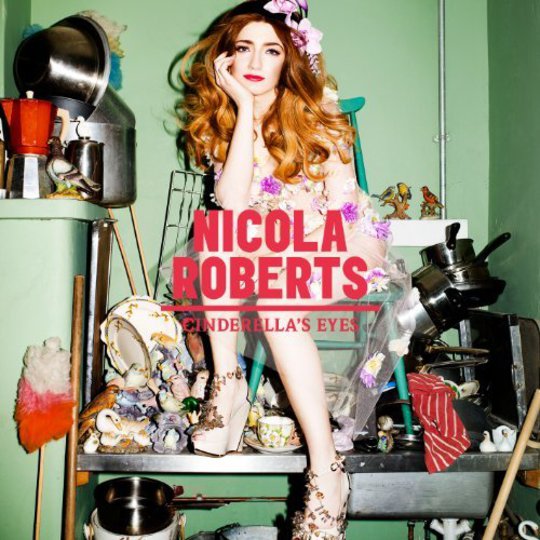 Let's be honest: Cinderella's Eyes, the debut solo effort from Nicola Roberts aka. The Ginger One Out Of Girls Aloud (™), was never likely to be an in-depth audio reinterpretation of Dalí's The Persistence of Memory. Although you wouldn't know that from the way The Blogosphere has been hyping her up for months now, piling the anticipation into something resembling a full-on avant-garde popgasm. Yet, as I was recently told in relation to a certain tellybox show involving a sonic screwdriver, 'just because it’s better than the others and everyone likes it doesn't mean it's good'. So, is Cinderella’s Eyes really that good?

Despite being a self-conscious blueprint for Quirky Pop, with specks of everyone from Kate Bush to MIA, if you're hoping for an album full of 'Beat Of My Drum' clones you'll be disappointed. 'Take A Bite' comes closest, with its gasps and labyrinth of percussive squiggles. It also directly references the infamous "rude ginger bitch" incident that marked, for many people, the moment when Roberts became by far the most interesting girl hailing from her particular reality TV mothership. It’s a key point in an album that, lyrically, is very much the story of a so-called ugly duckling fighting back against endless put-downs. If you want a poster quote: yes, it's Cinderella for the Twitter generation.

Pop culture hijacking fairytales isn’t new, of course. There's a Timberlake Wertenbaker play, The Ash Girl, that's basically a modern Cinderella using an 8th Deadly Sin, Sadness, to explore its heroine’s traumas. Cinderella's Eyes, while not getting quite so intellectual about it, reminds me of that play - especially on cuttingly personal closer ‘Sticks and Stones’, about how to cope, or not, with endless public taunts through underage drinking. They both explore whether it's actually possible to be happy after such constant belittlement and, frankly, being resigned to being sad for so long. But the album's much more fun than that suggests, with fighting talk like 'Take A Bite's "Sit back and grab a cup of tea/I'm gonna kick your ass now in 3D".

Elsewhere, Metronomy-produced 'i' is a stream-of-consciousness snark against the follow the herd, focus-group driven mentality of much of modern life, powered by practically non-existent instrumentation, disjointed rhythms and discordant vocals. It's 'quirks' like this that have put Roberts on the radar as a hipster icon; if it were a Cheryl Cole track there'd be violins and will.i.am rapping over it so everyone respects his managerial authoritah.

The album isn't perfect, and particularly lags in the middle; it's difficult to figure out why a cover of 'Everybody's Got To Learn Sometime' is even here. And 'Say It Out Loud' never really manages to raise its head above the parapet, suffering really for being a nice polished ditty compared to the relative oddities on display. Neither are terrible, but they are, ultimately, breathing space songs.

The album's production style is an intriguing insight into how the Xenomania machine operates, simply because in many ways it's a straight-up rebellion against their ideal of a perfect pop song. It's unlikely that Brian Higgins would have created a song like 'Fish Out Of Water', pointedly channeling The English Riviera’s 'She Wants'. But the education in How To Write The Next ‘Call The Shots’ is self-evident, both in structure and ‘borrowed’ pop history references. Roberts' skill comes from knowing her targets, knowing what she's doing (and knowing when others know it better), and hitting both very well. She’s done her homework, this one.

Cinderella's Eyes isn't exactly a sociology PhD thesis on the Plight Of Woman. But it's born out of the knowing air of experience, particularly of life's shittier moments, that all the best pop artists should have and too many lack. So is Nicola Roberts good in her own right, or just better than her peers? Fortunately, on the evidence of this, there’s every chance she’s both.