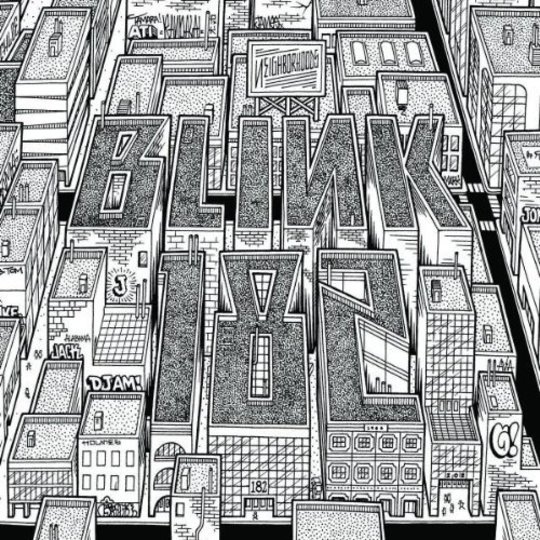 If you’re anything like me and Blink-182 formed a (semi-)important part of your musical upbringing, they will forever possess a certain charm, a reminder of mis-spent youth and seemingly endless knob gags. From Cheshire Cat’s to-the-point adolescent punk to the beguiling anthems of Take Off Your Pants and Jacket, Blink’s musical output has provided so many with nostalgic and occasionally guilty pleasures across the board. Contrary to the often frivolous nature of earlier material, 2003’s self-titled record proved that the band could also do serious without pretence or a lack of inspiration and they could also do a pretty good job of it... you know, for Blink. So here, following a four-year 'hiatus' and almost three years into their reformation, Blink finally present that long-promised reunion album, Neighborhoods, and, with it, another twist in their emotionally downward spiral.

That Neighborhoods maintains a dark, isolated feel is unsurprising given the circumstances of its recording. The band laid down each of their parts in separate studios, as 'that tension is what makes Blink sound like Blink', according to dutifully optimistic bassist/vocalist Mark Hoppus. Indeed, judging from the ways in which the trio have communicated, at least publicly, in recent years, their last attempt at a 'serious' direction on Blink-182 may have been forced by the tense relationships within the band and the same thing can be said for Neighborhoods; Blink sound like they’re working against rather than with each other throughout the album’s duration.

The fact that each member was given so much creative freedom by working apart from the others results in a noticeably inconsistent effort which would have greatly benefited from some collaboration in the recording process; musically, Neighborhoods is all over the place, a characteristic which, in itself, is both good and bad. But maybe someone could have warned Tom Delonge against overenunciating to a self-parodic degree, pointed out that the melody to album opener ‘Ghost on the Dance Floor’ is near-identical to (Delonge/Travis Barker side-project) Box Car Racer’s ‘There Is’ or that the opening progression to ‘Heart’s All Gone’ is horribly clunky. Call me old-fashioned but I still believe that there’s something to be said for all band members being physically present, ideally in both the songwriting and recording process.

Perhaps as a result of its inconsistencies, however, Neighborhoods contains a few genuine highlights along some of the new paths the band choose to dabble in, although several are bizarrely relegated to the deluxe edition of the album; ‘Snake Charmer’s writhing riffage, when combined with Barker’s hip-hop grooves, is particularly successful, while the apprehensive ambience of ‘Fighting the Gravity’ offers a pleasing dynamic contrast to the rest of the album’s pop hooks, for which the band still clearly have an ear. Lyrically, there are a few clangers as Delonge suffers the plight of a “cat in a cage”, while Hoppus almost pulls off the line “stop living in the shadow of a helicopter” but, overall, the themes are, as countless press articles have predicted, darker than previous releases; death, despair and frustration are recurring subject matter, albeit sometimes over-reliant on effing and jeffing rather than complex lyrical allegories. Nonetheless, don’t worry: you can still expect a fair few “da da da”s and “yu uh oh”s in amongst all the brooding and the angst.

Whatever its merits, Neighborhoods suffers for the same reason it’s so intriguing: it’s an extremely fragmented listen and feels like a culmination of each of its members’ separate projects rather than a new Blink-182 album. Maybe it’s the over-prominent synth work or Delonge’s U2-lite guitar atmospherics (both signature traits of the still-going Angels and Airwaves) but it just doesn’t quite feel like Blink. Ballad-wise, ‘After Midnight’ is no ‘I Miss You’ and ‘Up All Night’ can’t compare to ‘Feeling This’ in the lead single stakes: serious doesn’t have to entail fatigue and that’s something the band seem to have forgotten. While it certainly shows Blink to have the potential for much more than their past reputation may convey, Neighborhoods is reminiscent of that first awkward conversation after a heated argument, as no-one’s quite sure where to go next.