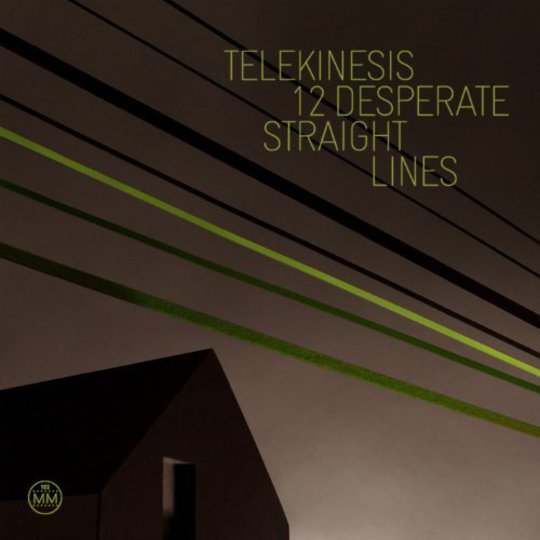 Sniping at straightforward indie-pop is a bit like playing piñata without a blindfold. Fortunately for candy-stuffed Seattleite Telekinesis, detractors often afford its catchiest new bloom a degree of lenience.

The press release states that Telekinesis - aka LIPA-schooled singer-songwriter Michael Benjamin Lerner - locked himself in a room and worked nine 'til five on this, the follow up to his self-titled debut. But the impression I get from the record is more that, having harnessed every ounce of wisdom accrued in his twenty-four years, he’s concocted a fail-safe pop-formula, fit to transform standard-fare guitar riffs, root-note bass-lines, 4/4 drum-rhythms and unflashy vocals into perfectly formed and effortless crowd-pleasers.

I imagine this frees up time for Lerner’s real nine 'til five, which encompasses a slew of more humble activities: ruing ruined relationships (‘You Turn Clear in the Sun’, ‘I Cannot Love You’), wondering what regrettable exes are up to (‘Dirty Thing’, ‘Patterns’) and the initial trigger: doing love wrong in the first place (12 Desperate Straight Lines).

You might come across a certain type of person who’ll question the authenticity of his adolescent mentality. I’ve long been suspicious of this breed of ‘music fan’; their skepticism seems borne of jealousy, mixed with a kind of cynicism that’s become so widespread these days, Los Campesinos! fans such as this prat believe themselves qualified to brand people 'too annoying' - “What gives him the right to moan about his specious little heart but not me?” Such cynics grumble, as if valiant moral fortitude were their only barrier from alternative megastardom. “To market his precious drivel to like-minded unfortunates, most of them wallowing in their own self-burrowed ruts? I mean, do we really need Another Sub-Replacements Indie Schmuck to half-heartedly pump our fists to at commercial music festivals, and shout over at shit-hole nightclubs, and stick posters of on our already brimming bedroom walls?”

Of course we fucking do and you know, we always will. For me, 12DSL captures the moment I first played air guitar to Weezer’s The Blue Album, and proceeds to replicate its gloriously visceral delights ad infinitum. And sure, this sort of thing can make for the very bleakest distributaries of the ‘mainstream’ if reduced to parody or cliché (see: career of Weezer). But Lerner has every inch of the stadium-indie minefield mapped out and slapped in plain view on his sturdy pop-machine’s fulcrum.

It’d be unfair to shovel all the kudos onto Lerner and his toothsome formula (although every instrument here is played by his hand). Dean of indie rock Chris Walla lends his subtle production quirks to the record’s sheen too, and indeed 12DSL gives an insight into how recent Death Cab might’ve sounded if they’d never been bullied at school, or No Age if they weren’t preoccupied with chronically miscalculated attempts at Sticking It To The Man. (Smothering ‘relevant’ lyrics in a smog of distortion does not your revolution maketh. If we’re playing this game - and if you hadn’t noticed, I am quite enjoying it - perhaps the closest comparison would be to a higher-fi, not-so-retro Apples in Stereo.

So while Lerner’s remit isn’t to outline an expansive, unexplored sonic or lyrical topography, and his ambition remains a finite resource, everything 12DSL sets out to achieve is a fist-pumping success. By abstaining from modern trends - gimmickry, Chillwave, contrived nostalgia et al. - Teller demonstrates that all it takes to reclaim the dormant joys of unpretentious tunesmith-ery is a misery-ridden romantic and his witty turn of phrase. As well as the infallible formula for rousing-but-not-grating, well-trodden-but-uncontrived, soberly uplifting, hooky, breezy pop music of course. So probably not that easy, I suppose...