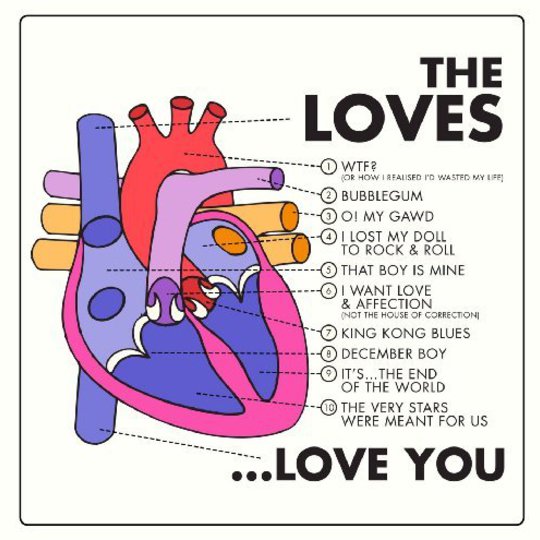 There’s nothing worse than indie kids going on about what is and isn’t cool, so it’s probably best to point out straight off the bat that The Loves definitely aren’t cool. OK? Good. I mention this because at first glance, the band might come across like an intolerably smarmy gang of kind-of-popular student-types, which prides itself on a catalogue of misdirected compliments and former half-glories. On ...Love You, one chorus asks “What the fuck? Felt like forever now it feels like it’s not” and former Velvet Underground member Doug Yule makes a cameo as Jesus. (Frankly, the less said about this the better.) Yet their radiating honesty and commitment to the cause lock the London-based outfit in a proud huddle, and after ten years doing the rounds, it’s a genuine shame they’ve decided to call time on the project this Valentine’s Day.

Often criticised for an unashamedly pastiche approach to songwriting, the rotating cast of Peel-endorsed Welshfolk has ploughed on regardless, sneezing out four LPs over the course of ten years between a grand total of thirty-four members, the only staple of which being lead singer and songwriter Simon Love. Although heavily self-referential, Simon’s style is not at all uncertain or insecure, nor is he under any illusions regarding the band’s musical triteness. As if to prove a point, two of the songs here are covers: comedian-poet Jake Yapp’s willfully twee ditty ‘The Very Stars Were Meant for Us’ - subjected to the glockenspiel and acoustic guitar treatment - and Nathaniel Mayer’s boisterous soul romp ‘I Want Love and Affection (Not the House of Correction)’ which sounds almost exactly the same as it did in ’66, just less ‘boisterous’. Salem this is not.

So assuming this isn’t wet indie irony (and Lord knows, that would be much, much worse), it can be gathered that ...Love You isn’t in any particular hurry to prove the skeptics wrong. Now, far from being a strict proponent of the progressive (small ‘p’) cause - or indeed a fan of ‘Salem’ - theirs is a manifesto I might wish to sympathise with. Who gives a hoot whether it’s bastardised, borrowed or stolen? If a piece of music commands hips to wiggle and lips to whistle, offering to share it with the world (provided the world wants to listen) is not commensurate with the blasphemous adulteration of one’s sacred indie honour.

But instead of hopping effortlessly between disparate ideas mid-song like pick and mix-pop saviours and Fortuna Pop! label-mates Bearsuit, each of ...Love You’s self-penned numbers sports a certain sound from a certain era, faithfully evoking its nostalgic charms via chord progression, melody and mood. From the crunching Seventies blues-rock riffery of ‘King Kong Blues’ to the inordinate ladling of Spector-sheen on ‘December Boy’, styles are pulled on, worn in and thrown back to the pile like a pair of Damon Dash’s silky white nylons; nothing in particular seems to hold their interest, save for the impulsive rush of switching costumes over as each song finishes.

Worse still, ...Love You can at times be so unbearably irritating that it precludes sensible analysis. (This coming from a Los Campesinos! fan...) For example, listening to ‘O! My Gawd’ feels uncomfortably like listening in on a giggling gaggle of mates, as they piss about in their bedroom with hand-me-down amps and dented SM-58s: the breezy Sixties pop hooks keep me hunched beside the keyhole, and I almost wish I could be in on their clumsy, esoteric jokes, but I’m not. And there’s only so long I’m prepared to hover by the doorway.

Admittedly, to make a listener feel left out of recorded music is quite an achievement. It is perhaps an inevitable byproduct of the communal band spirit The Loves represent and exude. And a specific sense of occasion does resonate through the album in the form of yelpy boy-girl backing vocals and relentless layers of bedroom instrumentation; an atmosphere of celebration and warmth is shared between members and even producer Simon Trough contributes a very capable, overdrive laden guitar solo in the finale of ‘It’s... The End of the World’.

Yet like a relieved amateur theatre troupe performing the final encore in a long run of shows, the impression is that tonight The Loves are out to please no one but themselves. By the sound of it, at least that is an objective they fulfilled.