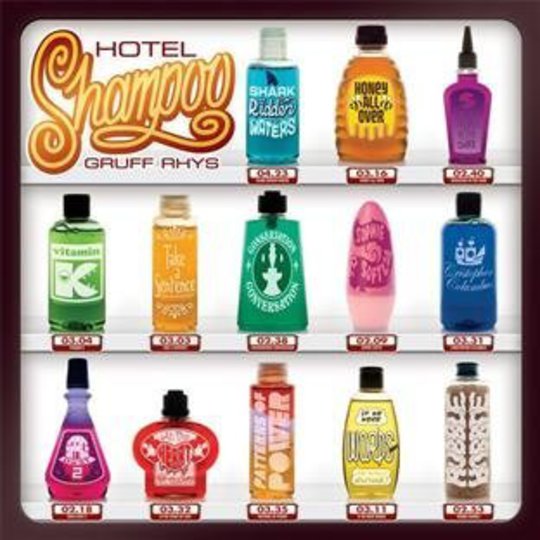 Turning 40 is a big milestone for anybody, a time when you should probably leave behind any childish flights of fancy and become, you know, a proper grown up. For Gruff Rhys, who has spent the last 15 years touring the world with the Super Furry Animals, this meant writing an album of piano ballads and finally getting over his pathological fear of the saxophone.

Of course, as with anything that the Welsh singer-songwriter has ever been involved in, the results aren’t quite as straightforward as that might sound. This is, after all, a man who bought a tank as a promotional item before selling it to The Eagles’ Don Henley, and who recently wandered around Patagonia searching for a long-lost relative before releasing it as a tour diary entitled Separado! .

Occasionally, it’s fair to say that Hotel Shampoo, Rhys’ third solo album, does the job he set out to do. ‘At The Heart Of Love’ and closer ‘Rubble Rubble’ are slow burning, plaintive piano songs, the former a lovelorn lament and the latter a reflective, melancholic bit of loveliness. Throughout the record, piano can clearly be spotted at the root of most tracks, whilst the prominence of Gruff’s vocals in the mix suggests a directness that neither he or his band can always be accused of.

However, that’s not to say that anyone who finds ballads and saxophone abhorrent should steer clear. Hotel Shampoo is not Rhys’ lounge album, and the man himself admits that he got bored of his piano concept soon after he embarked upon the idea. Most Rhys releases come with a grand concept or a silly idea behind them, only to reveal themselves as gently psychedelic indie-pop creations, and Hotel Shampoo is no different.

From start to finish, the melodies are sweeter than sugar, the music bright and sparkling, with Rhys’ charming falsetto resting on top. The native Welsh speaker has an ability to turn a line other people would balk at seem profound and insightful thanks to his delivery and the way he arrives at his English interpretation – ‘If We Were Words (We Would Rhyme)’ sums it up really. ‘Conservation Conversation’ and ‘Sophie Softly’ almost overdose on this sweet simplicity, but are rescued by their frivolous, throwaway nature.

While the standard on Hotel Shampoo remains consistently high, the heights come when an extra element is added to that basic infectious indie-pop mix. Co-produced by Mancunian vinyl guru Andy Votel, ‘Shark Ridden Waters’ is built around a wonderfully meandering melody and a steady, cycling sample of an obscure Sixties tune, and is possibly one of Gruff Rhys’s greatest songs. Melancholic pop at its finest, it’s a track that seems to rise gently from the ground and shimmer beautifully before your eyes, before slowly returning from whence it came. It’s that good.

Almost as fantastic is ‘Christopher Colombus’, a wonderfully batty track with a stomping beat that relates the great historical figure to modern woes, and still finds time for an exhilarating saxophone solo. And you don’t get those too often. Followed by ‘Space Dust #2’, a beautiful duet with El Perro Del Mar that finds romance at a scientific conference, it’s a high point for an LP which is punchy and immediate throughout.

So, it’s not what Rhys claims it to be, and neither will his next ambitiously-billed project. And as with all his records, either solo or with the Super Furries, you can see a similar formula constantly whirring away behind the scenes. However, when the craft remains so charming, and flashes of fresh inspiration continue to arrive amidst those captivating melodies, it’s hard to resist.