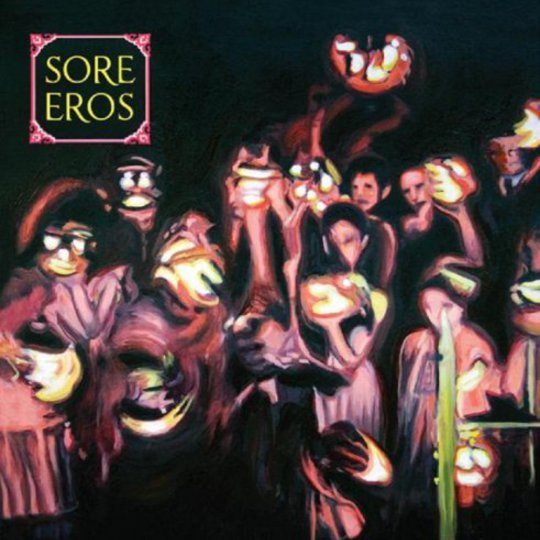 The funny thing about the whole freak folk tag – or ‘quirkysomething’, as I believe NME attempted to co-opt it – is that its appearance last decade suggested that there was something new about musicians getting off their gourd and committing pretty wibbling noises to tape with the aid of acoustic instruments.

Certainly if you can make an allowance for the judicious deployment of an FX peddle, then Sore Eros’s second album is exactly the sort of record you’d hope that any given pair of folk musicians from any given point in history might eventually come up with, given time, isolation and judicious amounts of hallucinogens.

The marvellously-named Know Touching is the work of Connecticut-based duo Robert Robinson and Adam Langellotti, and sees them comprehensively raise their game in the album naming stakes following the slightly flat wordplay of 2009’s Second Chants. And though the wantonly gross cover art (the first record’s in particular) suggests a certain amount of modern knowingness, Know Touching is an ageless, somewhat naïve record - pretty, druggy, occasionally a little creepy.

It reaches something like apotheosis in the second song, ‘Giraffe Kiss’, in which layers of inebriated glockenspiel cradle a Robinson vocal that is – accepting he’s not a German woman - freakishly reminiscent of Nico circa Velvet Underground &…, mannered and plangent and charmingly over-emphasising odd syllables. The song recalls the VU at their most winsomely primitive, building to the oddly affecting line “I saw a giraffe kissing you; what can I do?” before going on to ground itself in an adorable fug of white noise, inept backing harmonies, and the truly mournful fade to repeat line “I’ve got a pebble in my shoe, what can I do?”. It’s sad, but it’s the safe, small sadness of childhood happiness interrupted briefly and soon to be restored. ‘Make it Louder’ does a similar number on your heartstrings, Neil Young harmonica paving the way for a crackly, barely decipherable plea to “make it louder” that falls into a wash of wobbly coos; ‘Deep Inside’ whispers sweetly from inside a blanket of deep fuzz; and if those are Know Touching’s most direct complete songs then as a whole it’s a record glistening with moments of jewel-like prettiness, oft provided by Robinson’s tremulous, Wayne Coyne-esque quaver.

Of course if you shoved two folk musicians from any given time period into isolation, plus hallucinogens, you’d have to be pretty optimistic to expect nothing but gorgeously primitivist pop ditties to be the result. Does the world need more wallpaperish psyche folk? It doesn’t not need it, and whether it be soundtracking a calamitous, shivering comedown, a wander through an enchanted forest, or a thoroughly banal February afternoon, Know Touching frequently musters the same sort of meandering background beauty that Animal Collective exhibited on Campfire Songs. Lazy drones, glistening distortion, crackled field recordings and soporific vocals meander through the likes of ‘Just a Cloud’ and ‘Lay Back’ like picturesque streams wending through gentle countryside. It’s just about whacked out enough to not come across as twee, pretty enough to not take the shine off the gold-plated pop songs, and unobtrusive enough to avoid seeming self-indulgent. Not a masterpiece by any means, but it’s hard to imagine the years having much impact on its unvarnished charms.